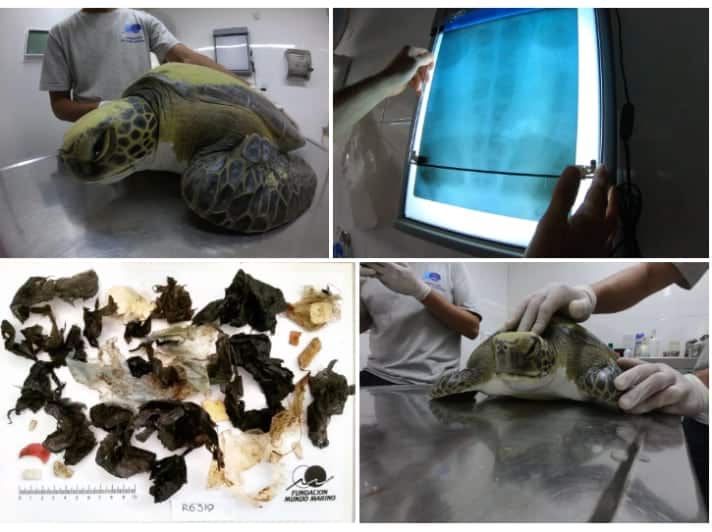 The turtle, which is doing better, expelled more than 13 grams of plastic from its digestive system.

A sick green sea turtle (Chelonia mydas) that became entangled in a fishing net off the coast of Argentina is doing much better after it spent several weeks pooping out plastic trash that it had ingested. The turtle was inadvertently captured December 29 and has thus far pooped out 13 grams of plastic, according to Mundo Marino Foundation, which is caring for the reptile. 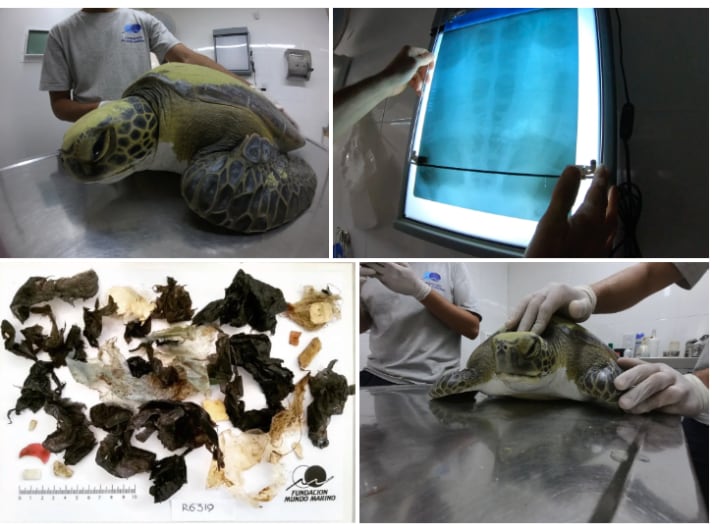 The green sea turtle and the plastic it had pooped out.

“Through radiographic plates we could see foreign bodies inside. Therefore, we began a treatment with a medication that favors its peristaltic movements (movements of the digestive tract) and allows it to eliminate what we observe on the plates," Ignacio Peña, veterinarian at the Mundo Marino Foundation said in a statement (translated via Google Translate) on its web page. "Today the turtle is eating green leaves, mainly lettuce and seaweed. We see it with a good attitude, so the evolution is favorable," Peña said.

“There is not only a risk of a mechanical obstruction due to plastic intake. The accumulation of non-nutritive elements in the digestive systems of these marine reptiles can cause them a sense of false satiety that gradually weakens them, ”Karina Álvarez, biologist and Conservation Manager at the Mundo Marino Foundation said. “In addition, a large amount of gas could be generated in their organs, product of the accumulated plastic, which would affect their ability to dive and dive, both to feed and to find more suitable temperatures.”

A 2018 study found all seven marine turtle species have been found with plastic in their digestive tracts. The researchers studied both stranded and bycaught (accidentally caught) marine reptiles in the Atlantic and Pacific oceans as well as the Mediterranean Sea, and found that all marine turtle species (green (Chelonia mydas), loggerhead (Caretta caretta), Kemp's ridley (Lepidochelys kempii), leatherback (Dermochelys coriacea), flatback (Natator depressus), hawksbill (Eretmochelys imbricata) and olive ridley turtles (Lepidochelys olivacea)), that were tested had some level of plastic and microplastic in their digestive systems.

The researchers studied 102 turtles in total and found a 100 percent incidence of microplastics in their guts.