The genus Tylototriton currently contains eight species of mostly robust salamanders native to China and to a lesser extent a few neighboring countries. Out of the eight, T. shanjing is available with some degree of regularity in the United States, mostly as wild-caught imports. Tylototriton verrucosus is rarely imported; however, captive-bred stock can be found with some patience and searching. Tylototriton kweichowensis was virtually unheard of in U.S. collections until about five or six years ago, when wild-caught imports began showing up. The first T. taliangensis appeared as wild-caught imports at about the same time as T. kweichowensis did, but this species has only been available a few times since in the U.S. Tylototriton asperrimus, T. wenxianensis, and T. hainanensis are all but nonexistent in U.S. collections. All three species are similar in appearance, so during the few times when imports have occurred, identification has been difficult. To the best of our knowledge, T. vietnamensis has never been imported into the U.S. In this article, we will focus on our breeding attempts, successes and failures with T. shanjing, T. verrucosus, T. taliangensis, and T. kweichowensis. 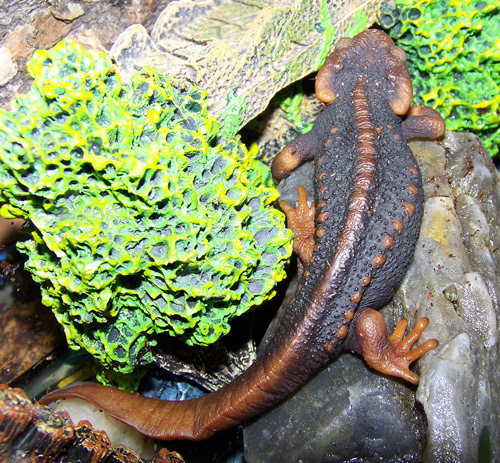 Crocodile newts can lay anywhere from 100 to 200 eggs.

Long considered to be the same species as T. verrucosus, the two were split in 1995. Emperor crocodile newts are a colorful species native to the Yunnan region of China. A terrestrial species, T. shanjing breeds during the spring and summer, laying eggs on aquatic plants. Emperor newts appear to be regularly bred in Europe every year. There are sporadic breedings in the U.S. as well, both by zoological institutions and private individuals. This provides a source of inspiration for the authors since neither one of us have yet to succeed with breeding T. shanjing. Anecdotal information suggests that this species prefers a drier environment than other terrestrial croc newts.

Native to China and several surrounding countries, Himalayan croc newts are the most widespread of the genus. Some sources say that Tylototriton verrucosus are fully aquatic as adults, but Osselmann noticed that her pair prefer a 50-50 tank, and they spend almost equal amounts of time in both halves. They prefer to stay mostly terrestrial during the colder winter temps, when basement water temps are between 50 and 56 degrees Fahrenheit, sometimes eating only once a month. They will sometimes enter the water in the winter, and often come out onto the land in the summer. There are times when one prefers to be terrestrial and the other aquatic. They can be kept fully aquatic, but keep in mind that individuals differ and might prefer a different environment if given the choice.

It may seem counter-intuitive to have the land side lower than the water side, but it's easier to set up, and in nature, who knows if there might be a big root that they have to crawl over to get to the water. These animals are very inquisitive, and shortly after being placed in a new tank, they will explore the entire space–land and water side.

Osselmann’s pair lives in a 40-gallon breeder tank, which may be larger than required. These creatures may live 20 years or more, and they deserve as much space as they can be given, not the minimum that one could get away with. For substrate, Osselmann uses a mix of Eco-Earth and cedar bark shavings. In the past, she has mixed Eco-Earth and sterilized garden soil, which she sterilized in the microwave.

When spring comes, their appetite returns, and they become mostly aquatic. Temperatures in Osselmann’s basement rise from 50 to 65, and in April her pair lay eggs.

Females eat more in preparation for laying eggs. They lay anywhere from 100 to 200 eggs over a period of a month. The eggs hatch in about one to two weeks. After a couple days, the larvae begin to eat, and you can feed them minced blackworms as a first meal. Some keepers do not even bother to mince the blackworms, as most newt larvae are aggressive eaters and will bite off pieces until the worms are large enough to swallow whole. Feed larvae daily, and watch how many blackworms they eat. The larger they grow, the less likely they will be to cannibalize one another when they go through metamorphosis.

If they are well-fed, they will begin to look more like miniature adults in about two months. At this time, you may add minced earthworms to their diet, and cut back on the blackworms a little (earthworms are less expensive, and the larvae eat a lot). After three months, they begin to morph, and they finish morphing by the end of the year. They are kept in a moist terrestrial tank for the first year. Osselmann keeps these tanks in the basement as she does her adults, and follows the same temperature patterns. The coldest part of the winter is about 50 degrees, and the hottest part of the summer gets up to 73 degrees. You could keep them in a warmer part of the house the first year, and they will eat more through the winter and grow faster. Just do not let temperatures go beyond 73 degrees. The following January, you may move them to a 50-50 tank, where they will acclimate to both environments. They will probably not be large enough to mate until they are around 2 to 3 years old, when the whole cycle begins again.

Although T. kweichowensis appears to be regularly bred in Europe, we have only seen three documented breedings in the U.S. to date. The first was by Michael Shrom, and the other two occurred with the Reves’ animals. Reves’ animals have laid more than 100 eggs.

The larvae are easy to raise on live food, and after some size has been attained, they will even accept frozen items, such as bloodworms. Metamorphoses occurs in approximately three months, at which point they look like miniature adults and live terrestrially for approximately three years. These croc newts have bred in both aquatic enclosures with floating cork bark and a terrestrial enclosure with a large water reservoir. It was interesting to observe that when kept permanently in a mostly aquatic enclosure, the animals rarely ever ventured into the water; yet, when kept in a semi-aquatic enclosure, they will go swimming much more frequently. For a breeding group of three animals, the enclosure should be 36 inches long, 18 inches wide and 18 inches tall.

Tylototriton taliangensis is another large croc newt species. In Reves’ experience, wild-caught imports of this species do not acclimate as easily as those previously mentioned. However, red-eared crocodile newts are hardy once established. Small numbers are reported to be bred in Europe every year, but we are not aware of any documented in the U.S.

Reves has maintained a group for approximately four years now. He has tried several enclosure designs, including mostly aquatic, shallow semi-aquatic and the current enclosure, which is a 65-gallon aquarium half filled with soil. A 5-gallon plastic container sunk flush with the soil is used as a water reservoir. A sponge filter along with weekly partial water changes helps maintain water quality. Live pothos grow on the land section and cork bark slabs serve as shelters. The animals frequently enter the water. For the last several years Reves has observed amplexus like behavior in the springtime, but eggs have yet to be produced. He suspects that the biggest factor causing this is the lack of a sharp temperature drop in the winter. There are several methods to artificially hibernate captive salamanders, including putting them in the refrigerator and placing them in a garage in areas that experience cold winters. Every winter, the pros and cons are considered when thinking about potentially losing rare animals due to the stress of artificial hibernation compared to successfully inducing them to spawn.

It is our hope that regular offerings of captive-bred Tylototriton offspring will become common place.

Foster Reves is a registered nurse, martial artist, husband and father of one. He has kept and bred a variety of herps, fish and invertebrates for more than 35 years.

Dawn Osselmann, Ph.D., has been involved in the salamander hobby for seven years. She is a moderator on caudata.org, the largest and longest running newt and salamander forum.

Sparreboom, Max (2009). Salamanders of the Old World : An Online Catalogue.