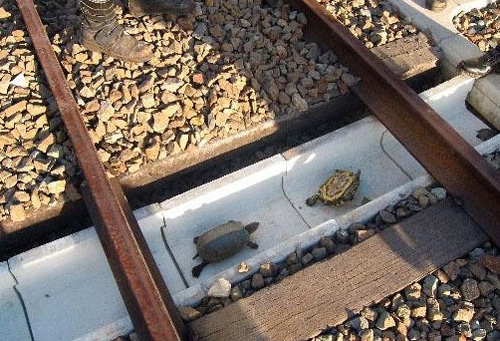 Concrete ditches help prevent turtles from getting stuck in the switch track on a Japanese train track.

Turtle crossings, or ecopassages, are becoming more common in the United States, usually tunnels under a road, but how do turtles cross a train track? Well, in Japan, they go under the tracks in a specially built turtle crossing. The Suma Aqualife Park in Kobe, Japan worked with the West Japan Railway Company to figure out how to keep turtles from getting stuck in the railroad tracks at two stations in Nara Prefecture, and especially near the track’s switch points, where the turtles were most known to get stuck, and then crushed.

The collaboration resulted in the creation of u-shaped concrete ditches build under the tracks, which the turtles use to crawl to their intended destination, on the other side of the tracks, without getting injured or killed by oncoming trains. Previously, the turtles would crawl under the tracks and get stuck at the switch points, where they would get crushed, disrupting train service on that part of the track. 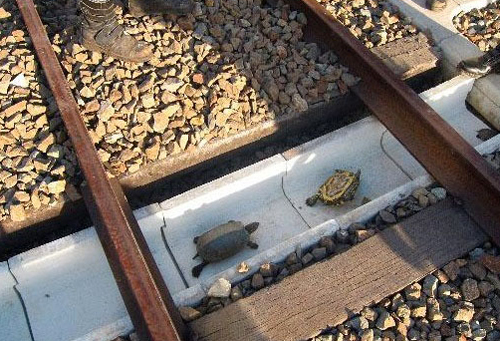 The u-shaped concrete ditches help turtles safely cross the track, though they sometimes land upside down.

Staff at the railway company monitor the concrete ditches and send those that have fallen into the ditch to the Suma Aqualife Park where they are checked and then released.

The safe zones were constructed in April, and so far, 10 turtles have been saved from the train tracks.