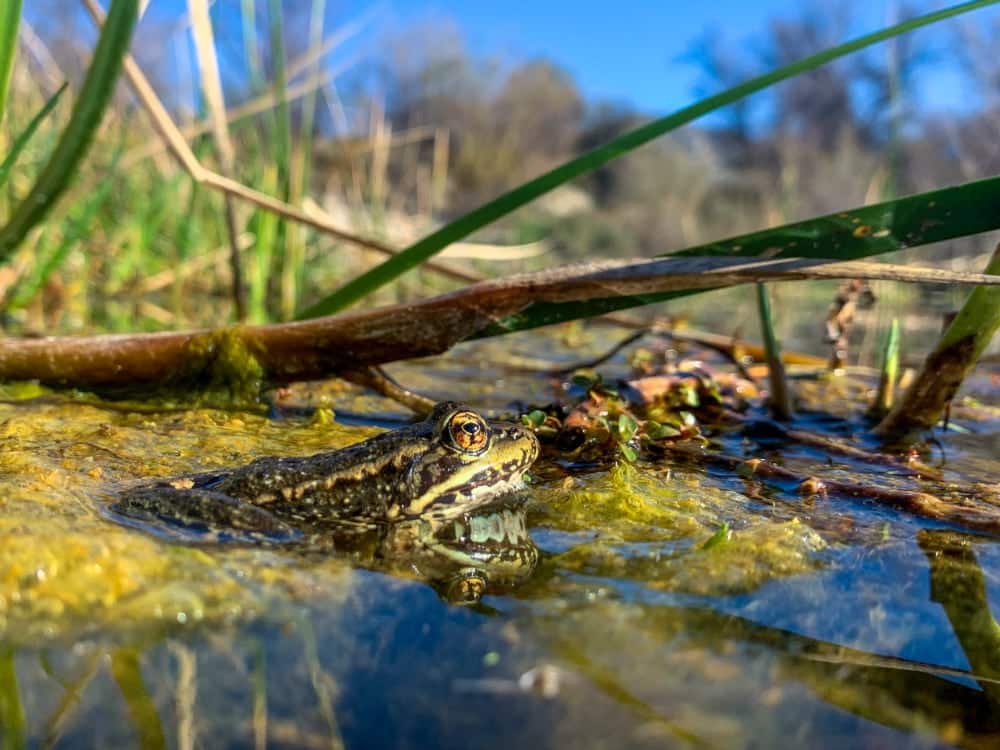 The effort to return California red-legged frogs (Rana draytonii) to Southern California, which has been ongoing by Robert Fisher from the U.S. Geolog

The effort to return California red-legged frogs (Rana draytonii) to Southern California, which has been ongoing by Robert Fisher from the U.S. Geological Survey’s Amphibian Research and Monitoring Initiative Program for more than 20 years, began to move the needle in San Diego County when Clark Winchell of the U.S. Fish and Wildlife Service started working with private ranchers Judy and Chuck Wheatley, who had just restored a pond on their property for the reintroduction of the Western pond turtle.

“Why not add red-legged frogs also?” Fisher asked Winchell who he has known for more than 20 years.

“It was serendipitous,” said Winchell, about the recent collaborative endeavor to bring California red-legged frogs back to their natural habitat in Southern California after they were extirpated decades ago.

The species was decimated by disease and invasive species and disappeared from San Diego County in 1974 and western Riverside County in 2001. More recently, there was concern about loss of habitat in Mexico (where some of the last of the frogs remained) with only one national park and a handful of ranches as the only sites with water for the frogs, a scarce resource since it was rapidly being diverted for agricultural use for growing tomatoes and strawberries.

It was this concern that resulted in multiple partners from national and international nonprofits, state and federal government agencies, private landowners and even a regional museum to come together to change the course of the frog’s plight.

Clark Winchell, division chief for the Conservation Partnership Program for the USFWS monitors water quality for the egg cages at the Wheatley Ranch. Photo by Jared Heath/USGS

“The synergy is phenomenal,” said Winchell, division chief for the USFWS’ Conservation Partnership Program. “I’ve never been on a project like this where everybody just wants it to be successful, and there’s no egos involved. It would be hard to say who the leader is because everybody is stepping up and moving it seamlessly forward.”

In order to make it happen, the partners needed to overcome several hurdles. Finding sites in California that could be restored to suitable habitat, finding a healthy source of eggs by creating breeding habitat for the frogs in Mexico and getting the eggs from one site to another were just a few of the steps. Each step contained many smaller steps, for example removing 3,600 invasive bullfrogs from the Wheatley site to finding someone in Mexico who could lead the effort there.

“The concern was we were going to continue to lose frogs in Mexico—a real concern that we would lose all of them before we could do anything,” said Fisher, a supervisory biologist. “I was worried, because the longer we waited and did nothing the more opportunities we lost.”

Once two sites in California were identified—Santa Rosa Plateau Ecological Reserve (owned by Riverside County and managed by The Nature Conservancy) and Wheatley Ranch (Mesa Grande, San Diego County) with a great deal of effort and funds from the USFWS’ Partners for Fish and Wildlife Program, The Nature Conservancy, San Diego Association of Governments and the Wheatley’s, the next step was ensuring a healthy enough egg mass population in Mexico to pull from.

Enter Anny Peralta and her husband Jorge Valdez who founded Fauna del Noroeste, a non-profit organization for conservation in Mexico (whose government has been supportive of the project). Peralta, whose Ph.D thesis was guided by Fisher and Jonathan Richmond of the U.S. Geological Survey and was a student of Brad Hollingsworth (San Diego Natural History Museum curator of herpetology), was pondering a career in teaching upon graduation. A trip with Hollingsworth and Fisher to search for red-legged frogs in the remote mountains of Baja California planted a seed in her brain about pursuing a dream — to recover the red-legged frogs.

Judy and Chuck Wheatley on their ranch in San Diego County. The Wheatley’s worked with the USFWS to restore a pond on their ranch for the translocation of Western pond turtles and California red-legged frogs. Photo by Clark Winchell/USFWS

Spearheaded by Peralta and Valdez, an early effort to figure out where the frogs were holding on involved assembling a bi-national team to survey more than 41 sites in Mexico over several years. Today, Peralta and her husband are creating breeding ponds at a handful of sites to improve habitat and increase population numbers.

“On some of these sites, we were only able to find two or three frogs, and we knew that if we didn’t do anything they were going to disappear,” said Peralta, who earned her master’s at San Diego State University and Ph.D in Mexico. “It didn’t feel right moving on to something else or getting a ‘real job,’ as people would say. I wanted to give it a try because if we didn’t do it, no one else would.”

“I can’t emphasize enough how key they are (Peralta and Valdez) to this program and how generous they are with their time and expertise,” said Winchell. “They’re phenomenal international partners. Without them we wouldn’t have a project. It’s that simple.”

Clark Winchell, division chief for the Conservation Partnership Program for the U.S. Fish and Wildlife Service with egg masses at the Wheatley Ranch. Photo by Adam Backlin/USGS

Once the breeding populations were healthy enough in Mexico, it was time to bring them to the U.S. for reintroduction, but COVID-19 threw another complication into the mix. With international travel by non-citizens curtailed and limitations by the federal government, the museum stepped in to assist in getting the eggs to the border. The museum along with The Nature Conservancy were also critical to the efforts to recover the species in Mexico with Peralta and Valdez Fisher and Winchell said.

“When we rediscovered the frog populations where we thought they were extirpated, it reinvented my whole idea that I wasn’t just tracking decline, that we could do something about always losing biodiversity,” said Hollingsworth. “I’ve retooled my entire research program because of the younger generation, people like Anny Peralta, who say ‘we aren’t going to let them disappear, we are going to do something about this.’ The serendipitous nature of this is that it all came together. Anny’s ponds were mature enough that they were producing enough eggs for harvesting, Clark had been restoring the ponds in San Diego (for the pond turtle) with help from the USGS, and we all met at the museum determined to do something about it.”

“The effort to reintroduce red-legged frogs in Southern California is the culmination of decades of scientific research, land protection and habitat restoration,” said Susan North, stewardship manager with The Nature Conservancy. “This is a really unique recovery partnership that offers a model for recovery of other threatened species that span the U.S.–Mexico border, an important consideration for biodiversity in the face of climate change.”

Efforts began in February and March of 2020 to translocate egg masses to each site. Half-masses of approximately 300 to 500 eggs were collected, with half left in the ponds in Mexico to contribute that genetic diversity to the source population. California red-legged frogs have about a natural three percent survival rate from egg to adult, meaning each half-mass is equivalent to nine to 15 frogs (placement into protective enclosures for a period of time is expected to increase survivorship). Reintroductions continued in 2021, with additional translocations to the two sites this past January and February.

On March 14, 2020, Dr. Robert Fisher with the U.S. Geological Survey (front right), Frank Santana, with the San Diego Natural History Museum (front left) and Susan North (back right) and Zach Principe (back left) both with The Nature Conservancy with a cooler of a few hundred California red-legged frog eggs going to Sylvan Pond at the Santa Rosa Plateau Ecological Reserve. Photo by Jessica D’ambrosio/USFWS

“We hope they’ll be able to breed this year,” said Fisher. “Success would be enough adults breeding and producing eggs that we are able to move them to other sites and get them stabilized – get them to persist back on the landscape. That would mean we are turning the tide on habitat degradation. We want to get to a situation of resiliency where they are self-sufficient. I was out this past fall and seeing metamorphs for the first time in San Diego County since 1974 was amazing. There were probably condors more recently in San Diego than California red-legged frogs.

Anny Peralta of Fauno and Frank Santana from the San Diego Natural History Museum survey a site. Fauno and the museum surveyed 41 sites in Mexico over several years in an effort to recover the population of California red-legged frogs. Photo Courtesy of Jorge Valdez/ Fauna del Noroeste

“It’s exciting to think we might be a key part of recovering a species in our area,” said Judy Wheatley. “It’s important to us to preserve the land for the benefit of species.”

Chuck Wheatley who once used the pond to prepare for the Alcatraz swim at age 75 in 2009, added, “With a conservation easement on our property, now no one can buy the property in the future and get rid of the frogs.”
Efforts are ongoing also with the Ventura Fish and Wildlife Office (assistant field supervisor Cat Darst) including the Santa Monica mountains.

It is Official! The California Red-Legged Frog Is That State’s Amphibian!