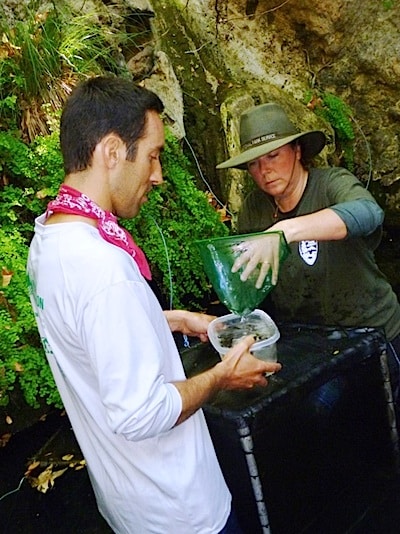 About 850 tadpoles were released into two streams in the Santa Monica Mountains.

When I was a kid, my local drainage canal ran perpendicular to the 405 freeway in Southern California. It was home to a variety of critters, including toads, American bullfrogs (Lithobates catesbeianus), and a huge population of African frogs (Xenopus laevis). I never saw a California red-legged frog (Rana aurora draytonii) in that canal. Now I know why, they were all but gone from Southern California when I was growing up. Now there is hope, at least in the Santa Monica Mountains as the California red-legged frog, a threatened species and the official state frog of the Golden State, has been reintroduced into the mountains by U.S. National Park Service biologists.

According to the National Parks Traveler, hundreds of tadpoles were released into two undisclosed streams in the mountains with the hopes of creating a viable population of the frog, which is in decline due to pesticides, pollution, and the introduction of non-native species throughout most of its range in California. 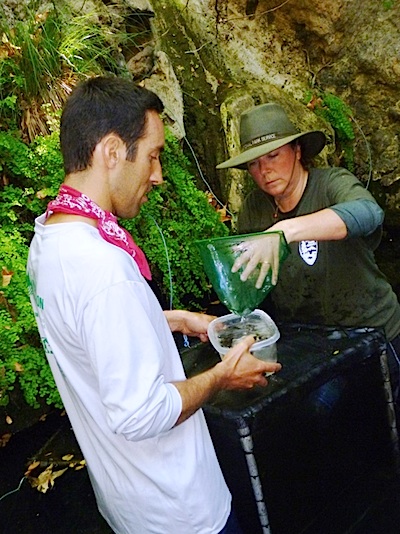 Biologists Mark Mendelsohn and Katy Delaney screen tadpoles from their protective mesh holding pens and prepare them for release into a stream in the Santa Monica Mountains. About 850 tadpoles were released.  The tadpoles will be monitored twice a week.

"California red-legged frogs haven't been seen in the Santa Monica Mountains since the early 1970s," said Katy Delaney, wildlife ecologist for the National Park Service. "Hopefully these tadpoles can help reverse the population decline of native frog species locally and across the state."

The biologists transferred about 850 tadpoles from a healthy frog population in the Simi Hills into the Santa Monica Mountains. They were placed into mesh holding pens to keep them away from predators and were fed twice weekly until  they were released. The biologists will continue to monitor the tadpoles. Let’s hope for the best!