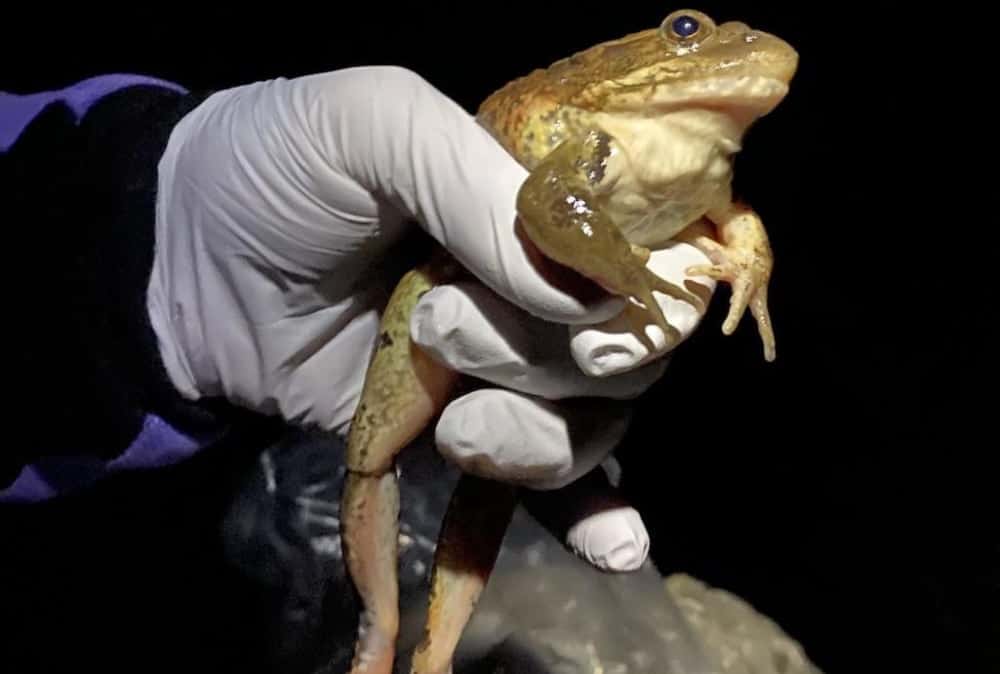 Populations of the California red-legged frog (Rana draytonii), a threatened species and the official state frog of the Golden State, were bolstered w

Populations of the California red-legged frog (Rana draytonii), a threatened species and the official state frog of the Golden State, were bolstered with the introduction, in 2014, of frog tadpoles into the Santa Monica mountains by U.S. National Park Service biologists. The biologists introduced hundreds of tadpoles into two unnamed streams in the mountains in hopes of getting breeding populations back into the wild.

Those efforts paid off in spite of a fire that destroyed much of the Santa Monica Mountains National Recreation Area. Frogs were discovered breeding in those two undisclosed locations, the first time in 50 years in which the species has been breeding in the wild in that area.

Researchers with the NPS located three egg masses at one site in the area and in Ventura County, biologists found a breeding pair, and a week later, an egg mass was found in the same body of water. And according to the Service, all of the egg masses successfully hatched hundreds of tadpoles.

“It was a welcome surprise,” Katy Delaney, lead of the breeding project and an ecologist at Santa Monica Mountains National Recreation Area told the National Parks Traveler.

The Woolsey Fire set the project back, as four streams prior to the fire held breeding adults as well as tadpoles. Hundreds of frogs died in that fire. The fire destroyed much of the habitat in which the frog lives and heavy rainfall caused debris flows, filling the streams with silt and mud, according to the National Park Service.

Three of the streams have since recovered and provide the deep pools the frogs prefer to lay their eggs. A fourth stream didn’t recover well from the fire and low numbers of frogs were found in that stream. But the researchers remain optimistic.

“This is one more step towards our goal of self-sustaining populations of these frogs in our region,” Delaney said. The biologists hope by the end of this summer to be counting froglets.

The California red-legged frog was made famous by Mark Twain’s short story, “The Celebrated Jumping Frog of Calaveras County.” Listed as threatened in 1996, Rana draytonii is the largest native frog in the Western United States. It grows from 1.5 to 5 inches in length and sports an olive or brown back and reddish legs and belly. In Northern California, the frog lives alongside the San Francisco garter snake, which feeds on the amphibian.