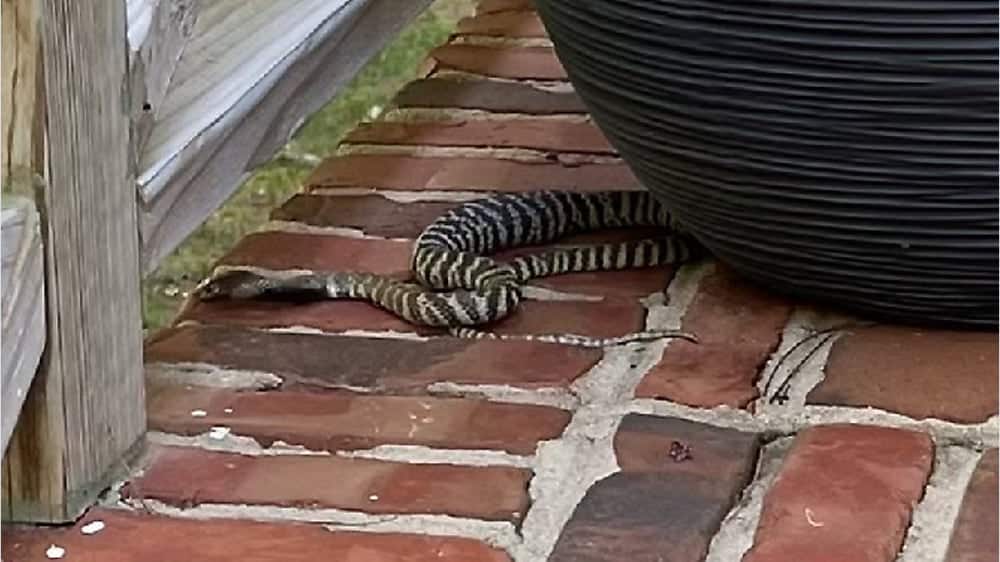 A venomous snake identified by the Raleigh, NC police department as a zebra (Naja nigricincta) spitting cobra, has been reported missing from a keeper

A venomous snake identified by the Raleigh, NC police department as a zebra (Naja nigricincta) spitting cobra, has been reported missing from a keeper in north Raleigh, according to a news alert on News Observer.

The department’s animal control unit got a phone call about the snake on a nearby porch, but when authorities arrived the snake had already apparently left the scene. Police conducted an investigation and determined the venomous reptile belonged to a neighbor in the area.

Police blocked off the area on Sandringham Drive and conducted a search but have not yet found the reptile. It is legal to keep venomous snakes in North Carolina. And there were no reports of any laws being broken. Venomous snakes are supposed to be kept in locked, escape-proof enclosures.

If anyone has information as to the whereabouts of this snake, or sees the snake, please call the Raleigh Police Department at (919) 996-1098.

All About Cobra Snakes

The zebra spitting cobra is native to dry climates in southern Africa and is nocturnal. The can be found in Angola, Namibia, Botswana, Lesotho, and South Africa.Two subspecies are currently recognized: the black spitting cobra (N. n. woodi) and N. n. nigricincta. The venom of these snakes can cause hemorrhaging, necrosis and paralysis. They also have the capability to spit their venom at potential predators that cause temporary and sometimes permanent blindness.