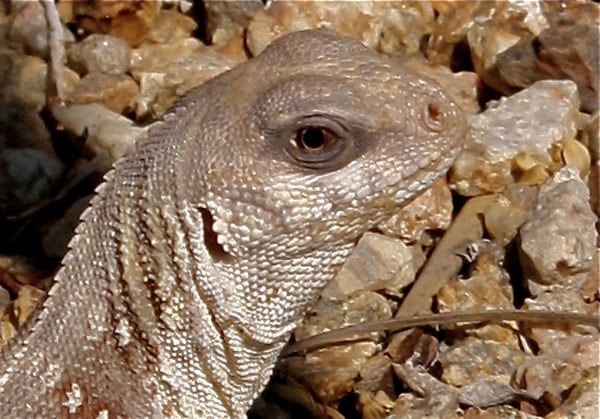 The desert iguana can be very hardy in captivity if given proper care.

A large, somewhat cylindrical, long-tailed lizard with well-developed legs, eyelids and ear openings, and the only U.S. native lizard with a vertebral row of enlarged dorsal scales. The head is comparatively short and round. Coloration is primarily light gray to white; dorsoventrally there is a “vest” of darker gray with white, brown, and often red markings. The tail is primarily very light gray or white with dark brown spots that form broken bands. Ventrally unpatterned. Both sexes may be light pink ventrally, but more commonly the belly and lower flanks are very light gray. Sexual dimorphism minimal; males generally have enlarged femoral cones during the breeding months. Females lay up to 8 eggs per clutch, with one annual clutch the norm. Hatching occurs after 60 days. Life span may exceed 14 years.

These lizards can be very hardy in captivity IF given proper care. Successful terrarium maintenance, reproduction, and rearing of desert iguanas is linked to four indispensible factors. First, they require very high temperatures that exceed 33 C (90 F), because high heat is essential for digestion of foods and maximal development of incubating eggs. Second, they need considerable bright light, which enhances normal behaviors and promotes more rapid growth. Third, desert iguanas must have a varied diet of vegetable matter that supplies the nutrients and water content they need. They are so fine-tuned to processing the ion concentration found in their diets that mineral supplementation is not advised. Finally, they require large terraria with a deep sandy substrate, with no more than one male per enclosure. 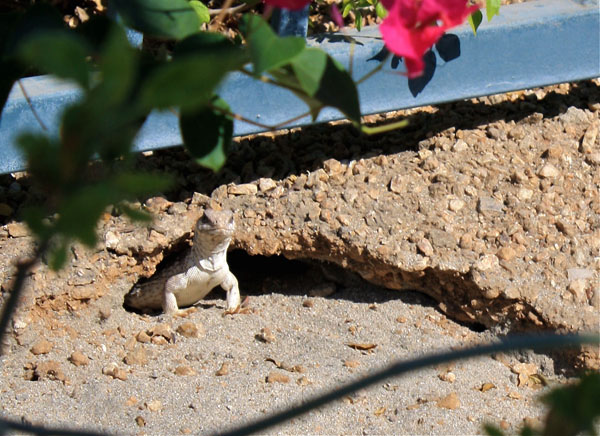 A desert iguana peeks out of its hole.

Desert iguanas are not readily available through dealers, though they do show up on stock lists on rare occasions. You are more likely to acquire specimens by searching the various online postings from individuals who already have desert iguanas and want to sell them or their hatchlings. They may also be legally collected in Nevada and, provided you have proper permits, in the other states where they occur. The best time to look for lizards is May through late August, in the early morning or late afternoon.

Hatchlings measure 5 to 5.3 inches in total length. If well fed and given proper lighting conditions, they may grow by about an inch (snout-vent length) per year. Young have a more intricate pattern than adults, often with considerable yellowish on the head, spine, and sides. Adults reach a maximum total size of 18 inches.

The record lifespan for wild desert iguanas is just over seven years. A captive male, who was nearly adult size when acquired, lived for a bit over 14 years; presumably, he was as much as 17 years old.

A pair of adult desert iguanas may be adequately house in a terrarium 3 ft by 2 ft, and 2 ft high. If more than two lizards are to be kept together, the terrarium should be much larger; for three or fours adults, provide floor space of at least 4 ft by 4 ft, but I strongly recommend using 6 ft by 3 ft. The viewing area should be made of glass, because desert iguana claws will scratch plastic, and the lizards are very prone to rubbing their snouts raw against screen. A screen top is advised. Desert iguanas require large terraria with a deep sandy substrate (I suggest 10-12 inches), with no more than one male per enclosure. They may be safely housed with similar-sized hot desert species, such as Chuckwallas.

Successful terrarium maintenance, reproduction, and rearing of desert iguanas is linked to two indispensible factors regarding light and heat. As stated previously, they require very high air temperatures that exceed 33 C (90 F), because high heat is essential for digestion of foods and maximal development of incubating eggs. Preferred temperatures range from 33 to 41 C (90 to 105 F). Use of heat lamps and under-terrarium heat pads is essential. There must also be areas, including burrows, where the lizards can move to escape both intense heat and direct light. They also need considerable bright light, which enhances normal behaviors and promotes more rapid growth. Several studies have shown that desert iguanas grow more quickly, to a larger size, and attain better health if exposed to bright light for at least 12 hours each day. Humidity should range between 15% and 30% except after brief periodic misting of the terrarium. 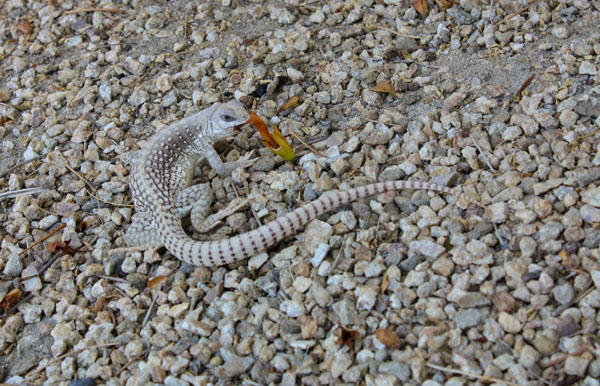 Almost any clean sand will do fine as substrate. It must be very slightly moist, just enough so that burrows can be dug without immediate cave in. Sand should be lightly sprayed from time to time to keep moisture levels.

In captivity, feed desert iguanas a range of diced fruits and vegetables, including corn, tomatoes, berries, oranges, squash, pumpkin, sunflower seeds, sesame seeds, and small nuts (unsalted). Some moist leafy lettuce should be included as a water source, because Desert Iguanas do not drink reliably from water dishes. Though they do eat termites, ants, and small beetles on occasion, insect prey represents an extremely small percentage of the natural diet, and need not concern the keeper. As herbivores, desert iguanas must eat more bulk, more often, and take longer to digest food than non-herbivorous lizards, so be sure they have some food available daily. They will not over-eat, so providing excess food is resolved only by removing what the lizards leave behind. They should not be given potassium supplements. 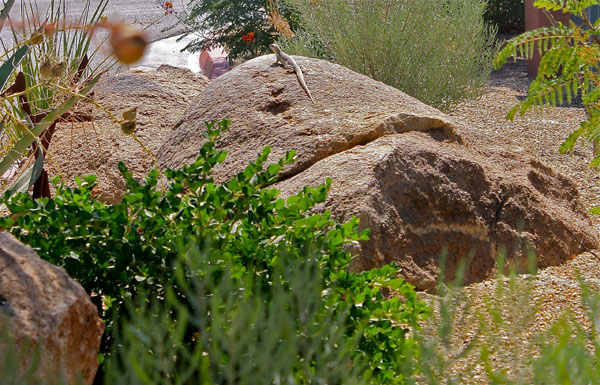 A desert iguana in its natural habitat.

Some moist leafy lettuce should be included as a water source, because Desert Iguanas do not drink reliably from water dishes. However, a small dish of clean water should always be available.

Desert iguanas are fairly docile animals that become accustomed to gentle handling. Freshly captured and very warm individuals may bite, and can break the skin.

Mated females may lay up to eight nearly round eggs, usually in a nest she excavates in the sand. Deposition sites are made of slightly moist soil in places where the subsoil temperature will stay between 28 C and 38 C (82 F and 100 F). Unlike refuge burrows, which are generally under plant cover, nests are excavated in areas of sparse or no vegetation, presumably because the roots would alter the soil water content to the detriment of the eggs. In the wild, they take 60 to 75 days to hatch, with incubation time reduced at the higher temperatures. Hatchlings tend to be 50 to 60mm (5 to 5.3 inches) in total length, and may grow at a rate of 22mm per year, snout-vent length. Thus, they tend to grow and mature quickly, reaching reproductive size in about 33 months. Lizards grow more rapidly, and to larger size, in wetter years than dry ones.

Hatchlings may be safely housed together for a few months, but should be separated before males begin to attack each other. House and feed them as you would the adults.

Degenhardt, W. G., C. Painter, and A. Price. 1996. Amphibians and Reptiles of New Mexico. University of New Mexico Press. Albuquerque.
Dibble, C.J., G. Smith, and J. Lemos-Espinal. 2008. Diet and Sexual Dimorphism of the Desert Iguana, Dipsosaurus dorsalis, from Sonora, Mexico Western North American Naturalist 68(4):521-523.  Grestle, J., and I. Callard. 1972. Reproduction and estrogen-induced vitellogenesis in Dipsosaurus dorsalis. Journal of Comparative Biochemical Physiology 42A:791-801.
Grismer, L. 2002. Amphibians and Reptiles of Baja California, including its Pacific Islands and the Islands in the Sea of Cortés. University of California Press, Berkeley, California.
Hallowell, E. 1854. Descriptions of new reptiles from California. Proceedings of the Academy of Natural Sciences of Philadelphia, 7: 91-97.

Harlow, H. J., S. Hillman, and Hoffman. 1976. The effect of temperature on digestive efficiency in the herbivorous lizard, Dipsosaurus dorsalis. Journal of Comparative Physiology B: Biochemical, Systemic, and Environmental Physiology 111(1): 1-6.