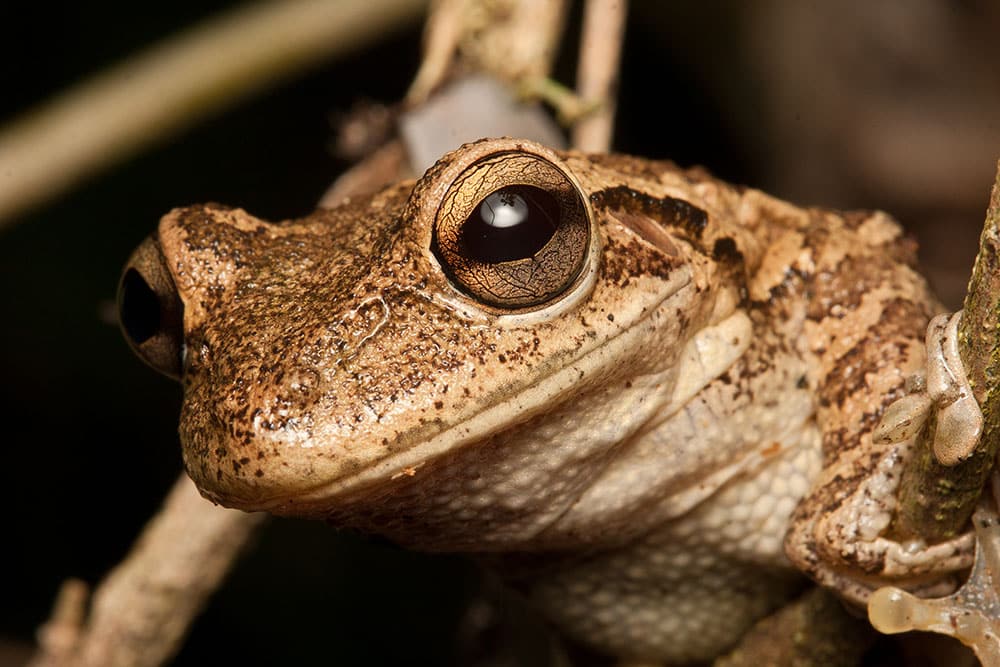 Cuban Treefrogs are invasive in Florida. Photo by Nathan A. Shepard/Shutterstock

It is the first time that the disease has been found in an amphibian in the state.

The state recommends that you euthanize the amphibian immediately and humanely once captured.

Researchers with the University of Florida have discovered that Cuban treefrogs (Osteopilus septentrionalis) in the state are carriers of rat lungworm disease, a disease that can cause debilitating illness in humans.

Heather Walden, Ph.D., an assistant professor of parasitology at the University of Florida College of Veterinary Medicine told the University of Florida news that the frogs were located in Volusia County where the rat lungworm (Angiostrongylus cantonensis) has never before been detected. It is the first time that the disease has been found in an amphibian in the state.

“These frogs are going through the state, disrupting our native populations,” Walden, the study’s lead author, said. “They are eating native species, such as green treefrogs, and consuming not just the frogs and other food sources, but the parasites they carry with them.”

The researchers examined 16 Cuban treefrogs found in Volusia County and found rat lungworm larvae in the hind leg muscles of the frogs. Because these frogs eat a variety of animals, including invertebrates such as snails and other insects, but also lizards and other frogs, the researchers are concerned about the continued spread of rat lungworm to species that may eat the Cuba treefrogs. And the rapid spread of the Cuban treefrog population is cause for concern.
“The Cuban treefrog is extremely abundant in residential areas in peninsular Florida, often seeking shelter around homes that put them in close contact with humans,” Walden said. “If infected with parasites, this species’ association with humans indicates they have great potential to serve as agents of zoonotic transmission and may also threaten pets that consume them.”

The Cuban tree frog is native to Cuba, the Cayman Islands and the Bahamas. Their coloration varies widely, white, gray, green, or brown and they can change colors. Some have splotches on their backs while others are a solid color. The state recommends that you euthanize the amphibian immediately and humanely once captured. It is illegal to re-release them. These frogs eat native species, such as green treefrogs, which is why euthanization is recommended when they are captured.