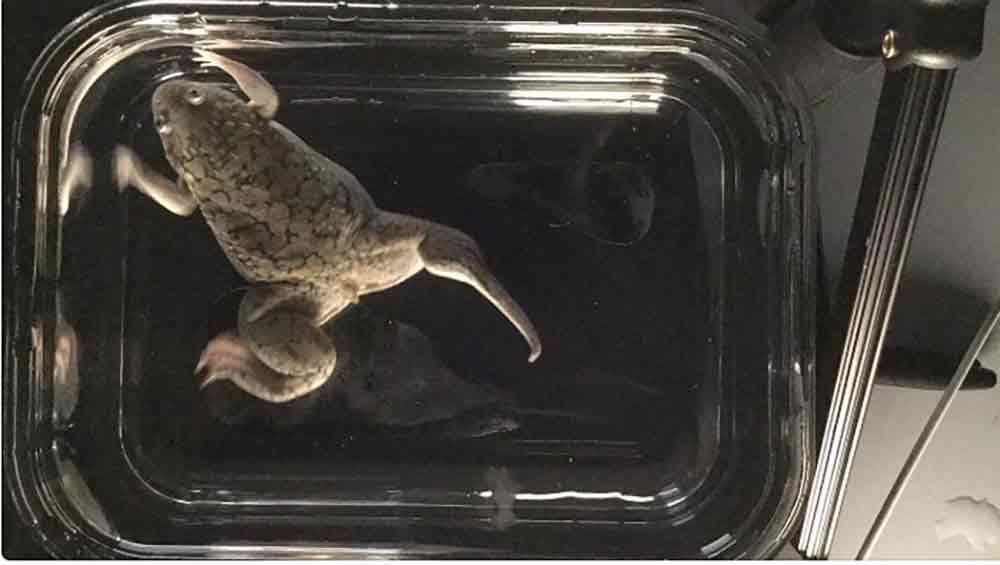 The frogs regenerated their limbs after 18 months.

The researchers surgically removed one hind leg of adult African clawed frogs and then used a silicone sleeve, called a BioDome cap, on the stump to administer a five-drug cocktail that they hoped would stimulate regeneration.

The African clawed frog (Xenopus laevis) has the capability to regenerate its hind limbs with the aid of a five-drug cocktail applied to the severed area of the frog’s legs and kept there for 24 hours, according to researchers with the Tufts and Harvard University’s Wyss Institute.

The researchers surgically removed one hind leg of adult African clawed frogs and then used a silicone sleeve, called a BioDome cap, on the stump to administer a five-drug cocktail that they hoped would stimulate regeneration. 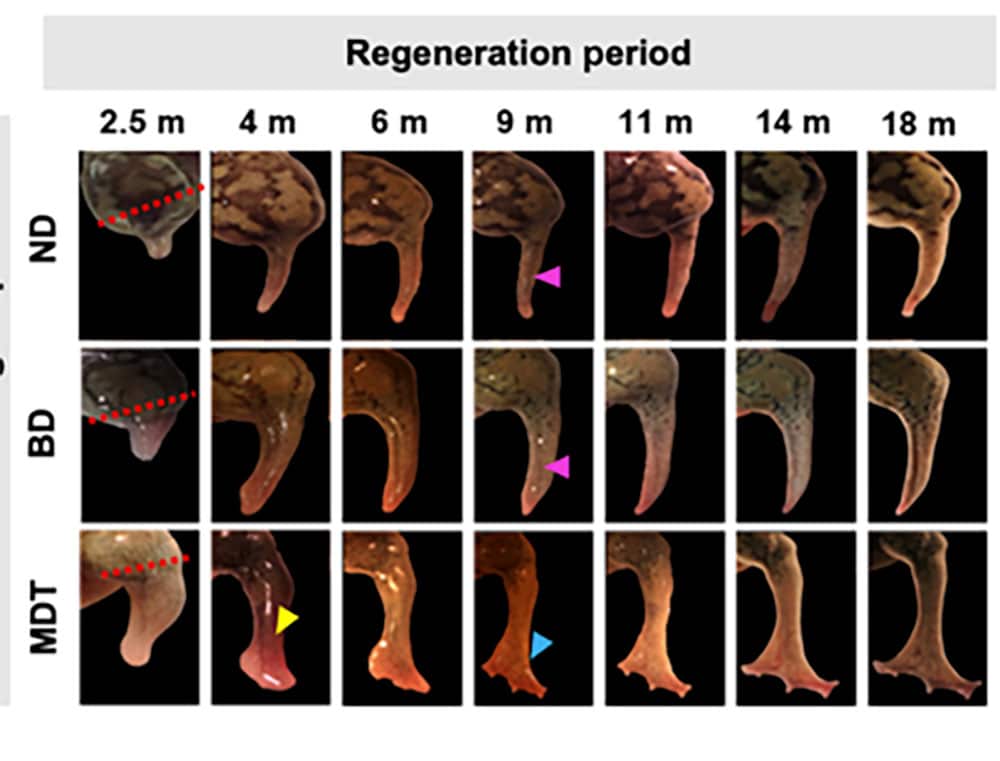 The drugs that were administered each had a specific purpose; one for reducing inflammation, inhibiting the production of collagen, and encouraging the growth of new nerve fibers, blood vessels and muscles. Eighteen months after exposure to the drug cocktail, the frogs had working hind legs.

“Mammals and other regenerating animals will usually have their injuries exposed to air or making contact with the ground, and they can take days to weeks to close up with scar tissue,” said David Kaplan, one of the researchers at the Department of Biomedical Engineering, Tufts University, Medford, MA. “Using the BioDome cap in the first 24 hours helps mimic an amniotic-like environment which, along with the right drugs, allows the rebuilding process to proceed without the interference of scar tissue.”

The BioDome was attached for just 24 hours, but after 18 months the frog limbs grew dramatically, re-creating a nearly fully functional leg. These legs included bone structures smart to a natural frog leg’s bone structure, more robust internal tissues including neurons and toes that grew from the end of the limbs. The newly grown limbs were even used by the frogs to swim through the water.

“It’s exciting to see that the drugs we selected were helping to create an almost complete limb,” Nirosha Murugan, research affiliate at the Allen Discovery Center at Tufts said in a statement released by the university. Murugan is the first author of the paper. “The fact that it required only a brief exposure to the drugs to set in motion a months-long regeneration process suggests that frogs and perhaps other animals may have dormant regenerative capabilities that can be triggered into action.”
The complete study, “Acute multidrug delivery via a wearable bioreactor facilitates long-term limb regeneration and functional recovery in adult Xenopus laevis” can be read on the Science Advances website.

The African clawed frog is an invasive species in the United States and is known for its voracious appetite, eating virtually any animal that it can fit into its mouth. It is highly resistant to disease, and spends the majority of its life, if not all of its life in the water. It has a smooth skin that is slimy to the touch and claws on its hind legs. It grows to about five inches in length and is native to Africa. Xenopus laevis is currently regulated in Arizona, California, Kentucky, Louisiana, New Jersey, North Carolina, Oregon, Virginia, Hawaii, Nevada, and Washington.