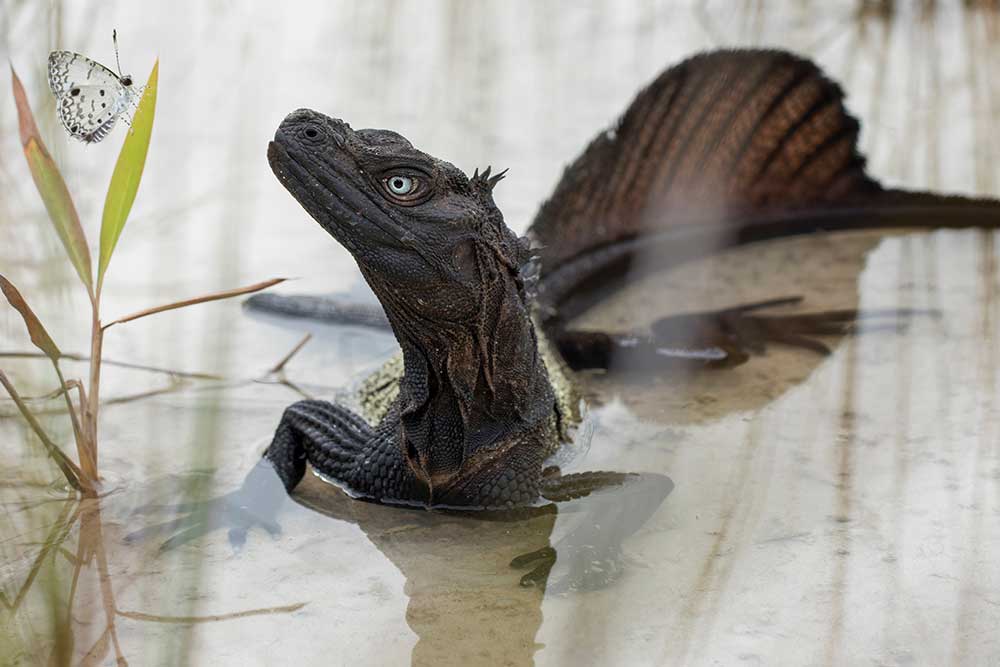 Having a long and somewhat elusive history, the genus Hydrosaurus is finally getting its time in the spotlight.

Return of the Dragons

A recent revision to the taxonomy of the sailfin lizard has increased the number of species from three to five.

Having a long and somewhat elusive history, the genus Hydrosaurus is finally getting its time in the spotlight. With the last update in 1911 and more than a century of being abandoned in herpetoculture, a recent revision to the taxonomy of the sailfin lizard has increased the number of species from three to five. The genus Hydrosaurus is now comprised of H. pustulatus from the Philippines, H. weberi from Halmahera and its adjacent islands, H. amboinensis from central Moluccas and New Guinea, H. celebensis from central, south and Southeast Sulawesi and H. microlophus, endemic to the southernmost peninsula of South Sulawesi.

Although H. celebensis and H. microlophus were described in the 19th century, both were considered H. amboinensis and only a few individuals in the early 20th century discussed the possibility of the Sulawesi sailfins as additional species. New phylogenetic analysis, photographs and excursions in the early 2000’s demonstrated high genetic diversity within the Sulawesi specimens and sparked the reconsideration of further populations. The adoption of these new species came as a result of the 2020 study, “Dragons in Neglect: Taxonomic Revision of the Sulawesi Sailfin Lizards of the Genus Hydrosaurus Kaup, 1828 (Squamata, Agamidae)” where 51 specimens in combination with historical information were studied and compared.

It appears that even the most experienced keepers are still working to fully understand phenotypic and historical differences within the genus Hydrosaurus. With the most recent taxonomic revision taking place only a year ago, we would like to provide specific details about each of the species in the genus with emphasis on diversity between North/Central and South H. celebensis and H. microlophus, the populations of H. amboinensis and H. weberi and variations between North and South H. pustulatus. After keeping, breeding and researching sailfin lizards for many years, it is our hope that this information will give an overview on the revisions to the genus and enhance our communication and future research related to this underrated lizard. 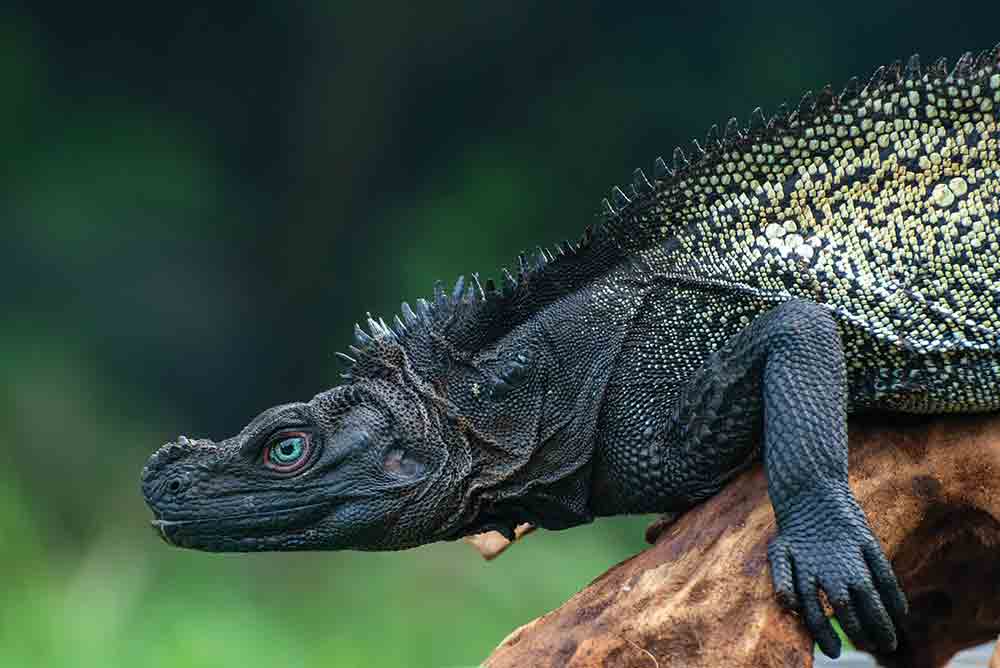 Depending on its location, both Hydrosaurus celebensis and Hydrosaurus microlophus vary in its overall phenotype. For the purpose of this article, we will refer to their phenotypes and identify them by their location. Whether or not the phenotypes are in fact different species is yet to be determined by science. 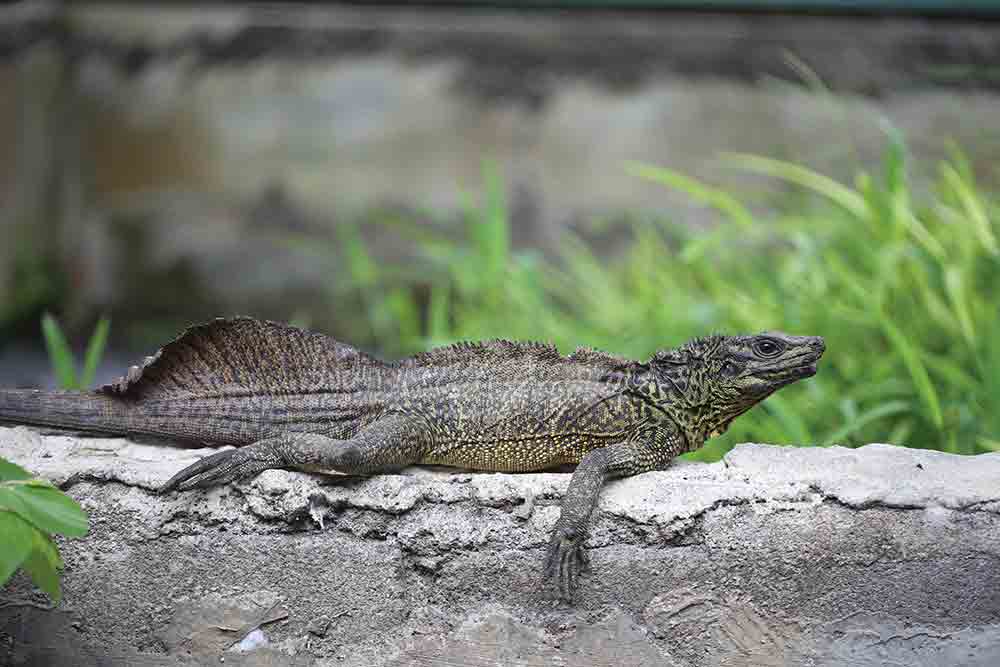 Male H. celebensis specimens from Central Sulawesi appear nearly jet black with tints of gold. On the contrary, females of this variety have some black on their face with a gold body and tail.

Males within the South Sulawesi phenotype have a charcoal black head and tail with a contrasting golden to cream colored body. Mature specimens also display black front and hind limbs. Slight variation can be seen between the two phenotypes such as teal spikes along the nuchal crest and slightly enlarged dorsal scales in the South Sulawesi specimens. These characteristics can differ between individuals, and it is still undetermined as to whether or not these variations represent locality.

On the other hand, female South Sulawesi phenotype H. celebensis show little variation and have much less contrast than their male counterparts. Their facial pattern gives them an appearance of wearing a mask and their lips resemble the color of the body pattern with yellow and cream pigmentation. Their tails are typically black and grey but depend on the overall color of the individual. 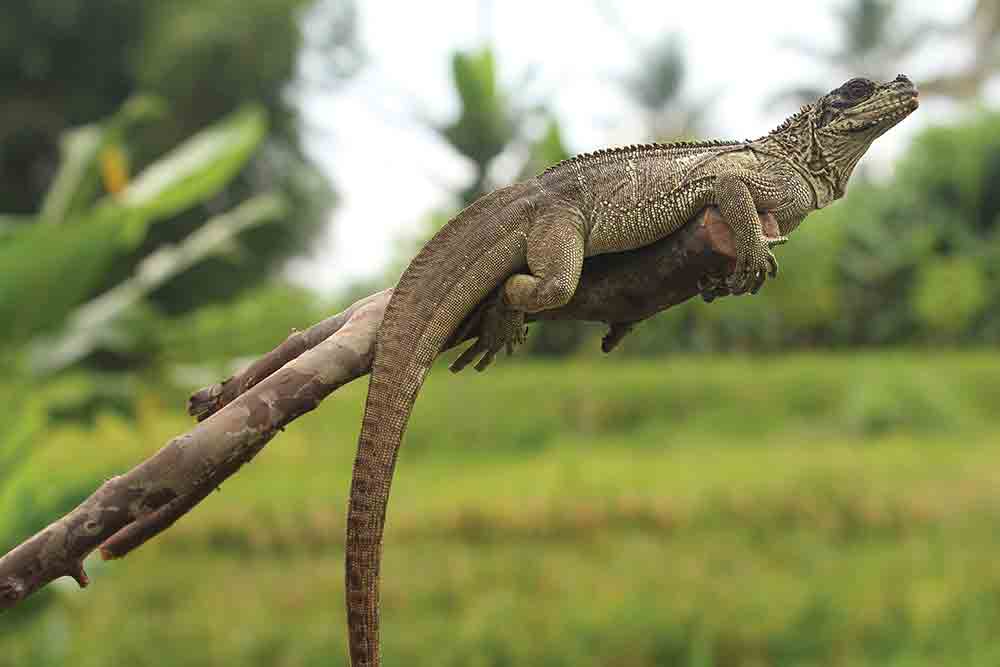 The largest of the five known species, easily achieving four feet in total length, is Hydrosaurus microlophus, or the Sulawesi giant sailfin dragon. Scott Corning, well renowned sailfin dragon keeper and breeder, noted that the body build of H. microlophus resembles that of a rock iguana (Cyclura species). They truly are the big and bulky giants of the complex when compared to the other four species of Hydrosaurus. The species is endemic to South Sulawesi with two main phenotypes recognized in the northernmost regions and the southernmost regions.

The northernmost phenotype (Bone, Pinrang, and Soppeng regencies) is easily recognized by the dark grey to almost black dorsal coloration in mature male specimens (though not entirely as dark as H. celebensis) with a tan to bright yellow or cream underside. Females of this phenotype have a dark to light grey colored body as opposed to the darker body of male specimens. Females also have less of the yellow/cream color on their underside, although it is still present along the chin, belly and sides of the body.
Both male and female specimens of H. microlophus in the southernmost regions of South Sulawesi (Gowa regency) exhibit an overall dark color scheme with a black to dark grey face and a brown or greyish body. They are complemented with dark, keeled, lateral scales that are generally the same color as the face, although the dorsal scales in female specimens appear to match that of the overall body color.

Male and female H. microlophus of both North and South phenotypes are easily identified by the presence of exaggerated and enlarged “clusters” of keeled scales along the sides of their dorsum. While other Hydrosaurus species possess small scale clusters along the side of their body, none of their scale clusters are as large as H. microlophus. Both sexes also display a nasal crest with females having no spikes and males having short but noticeable spikes.

The Maluku archipelago is separated into the regions of Maluku and North Maluku with many hobbyists referring to the entire region as “The Moluccas.” The islands of Ternate and Halmahera within North Maluku are home to Hydrosaurus weberi, or the Weber’s sailfin dragon. Many research papers and journals indicate that Ternate and Halmahera are the only islands that this species inhabits, but there are claims that H. weberi exists on other Islands of North Maluku, none of which have been proven via credible sources. 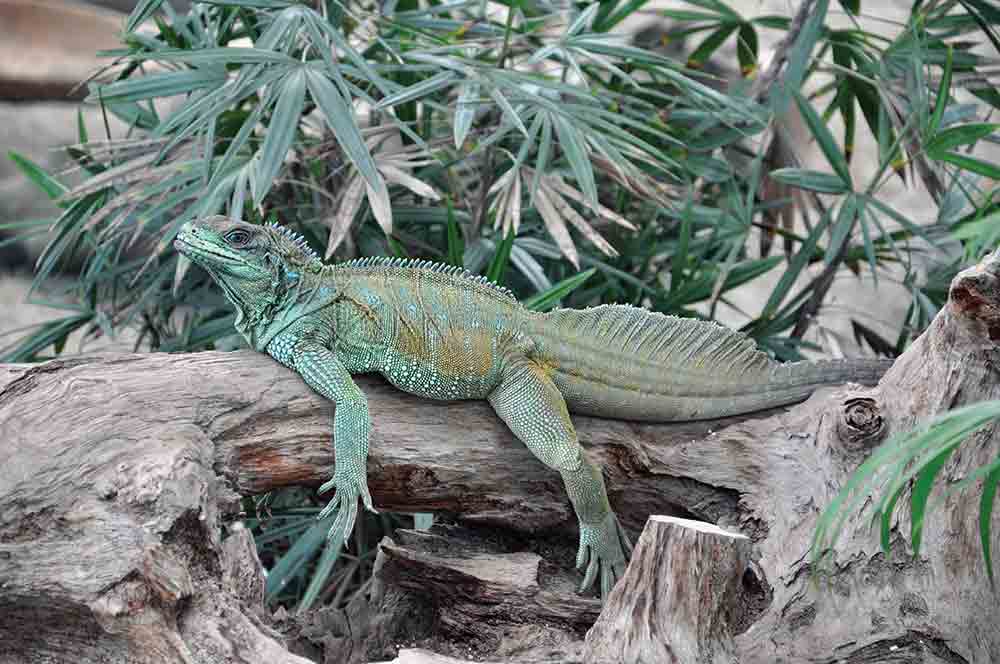 Previously referred to as “intergrade sailfins” by hobbyists, Weber’s are the most commonly kept sailfin species in American herpetoculture, with the vast majority being imported wild-caught specimens. They are the smallest of the five species, with males averaging approximately three to three and a half feet in total length and females being slightly smaller. H. weberi have a fairly robust build compared to their Maluku cousin, H. amboinensis.

Weber’s sailfin dragons are easily identified as neonates by the separation of their nuchal and dorsal crest, a characteristic that the other four species lack, as well as their tail being not quite twice the length of their snout-vent length (SVL). Weber’s display some color variation, with specimens from Ternate having a speckled pattern with dull green coloration and individuals from Halmahera exhibiting more of a washed out green to mint color with some yellowish tints on the sides of the body. Mature specimens in both phenotypes appear to have a dark to almost black “cap” over their eyes and top jaw. However, juveniles do not develop this coloration until subadult size.
Hydrosaurus amboinensis is the second species found in the Moluccas and is restricted to the various islands south of the H. weberi range.

According to observations listed in The Reptiles of the Indo-Australian Archipelago Volume 1 by Dr. Nelly De Rooij, the isles which H. amboinensis have been observed include the Togian Islands, Buton, Ambon, Seram, Bacan, Ternate, Halmahera, Waigeo and New Guinea. While Hydrosaurus amboinensis have the widest range of the Indonesian species, there appears to be little phenotypic variation between males and females. Currently, Scott Corning owns specimens with a patternless phenotype that were suspected to have been collected on Ambon Island. No other specimens have entered the States expressing this patternless phenotype. Aside from the patternless sailfins, H. amboinensis is generally recognized by its drastic green coloration with black speckling throughout the body and tail. Some specimens display a “black cap” on top of their head, but this is not consistent in every individual.

H. amboinensis can be distinguished from its Moluccan counterpart, H. weberi, by differences in its nuchal and dorsal crest. The two crests are connected in H. amboinensis specimens, whereas it is separated in H. weberi. This trait can be seen on juvenile specimens of both Moluccan species making identification easy when juveniles are side by side.

While the color of the adult specimens is easily differentiated, juveniles of both H. amboinensis and H. weberi are fairly dull in color, hence the need to recognize secondary species characteristics for identification. The femoral pore count of both species is different, with H. amboinensis having an average of 14 femoral pores and H. weberi having 12 to 13 (Rooij 128). Of course, there is always the possibility that some individuals may have more or less pores than the recorded averages and should not be the sole source of identification. Nostril shape can also aid in identification between the two species. Although not present in all specimens of H. amboinensis, they can have oval shaped nostrils whereas all other Hydrosaurus species have circular shaped nostrils.

The most coveted of the five species, the Philippine sailfin lizard has become synonymous with a classic blue and purple coloration, but this species does show significant phenotypic variation. Hydrosaurus pustulatus is the only recognized species of the genus found outside of Indonesia. Endemic to the Philippines, H. pustulatus is listed as a vulnerable species according to the IUCN’s Red List and is rarely sighted in its natural environment. The Philippine sailfin lizard is often illegally collected for the pet trade, hunted for food and threatened by the destruction of its natural habitat. 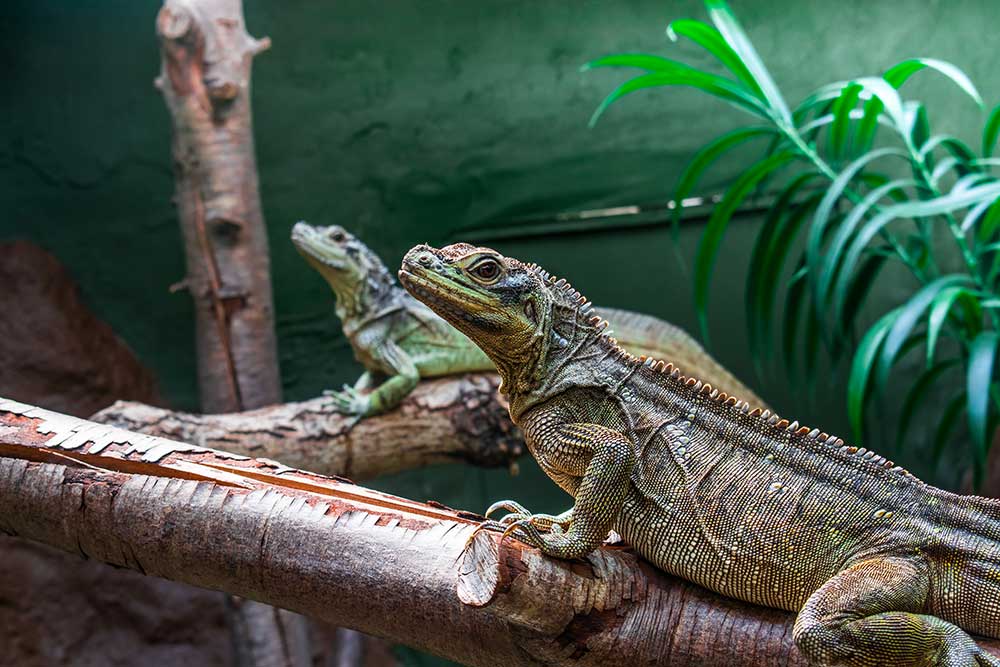 The northern Philippines is home to the commonly recognized phenotype with the traditional purple and blues that are highly sought after. Sailfins in this area can also display some orange and yellow pigmentation. Given that there are numerous islands that encompass the northern regions of the Philippines, exact locality variations are still to be determined by science. In the central Philippines, specimens continue to display some purple and blue coloration, while specimens in the southern regions are mainly green and black and look similar to that of H. amboinensis.

As juveniles, the northern phenotype has a yellow base with some purple and blue coloration compared to the southern phenotype, which has more of a green base color. Juvenile H. pustulatus look very similar to juvenile specimens of H. weberi making species identification difficult. However, H. pustulatus tends to have an overall yellowish color scheme across the body as well as the presence of single to multiple clusters of dorsal scales (though not as drastic as H. microlophus). The nuchal and dorsal crest is connected in H. pustulatus whereas the crest is separated in H. weberi juveniles.

It is hard to believe that the sailfin lizard isn’t at the forefront of current herpetoculture due to its stunning physical appearance and fascinating history. Understanding the species is no easy task given the lack of available information and of those interested, few are fortunate enough to keep these large agamids in captivity and even fewer have successfully bred them. It is our hope that the information provided in this article will not only help people appreciate and distinguish the newly revised species but will also spark an interest in others to discuss and learn more about this still evolving genus. Kasey Schultz, owner of Zion Hill Exotics, Alex Myers, owner of Alex’s Agamids. REPTILES