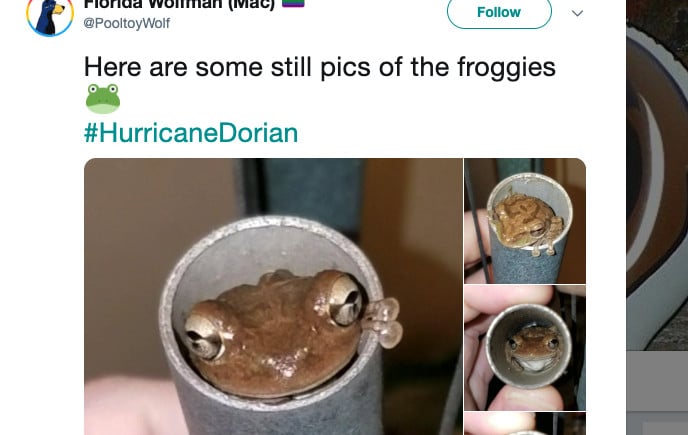 The man released the amphibians after he found them.

A man in Florida was putting away his windchimes in preparation for Hurricane Dorian when he discovered six Cuban treefrogs (Osteopilus septentrionalis) nestled up in the chimes.

"So I went to put away my wind chimes for #HurricaneDorian, and…🐸🐸🐸🐸🐸"

The man, whose Twitter name is Florida Wolfman (Mac) then posted a video of his discovery on the social media site September 2 and since then it has garnered more than 1.66 million views.       Florida Wolfman then posted up some still images of the invasive frogs, all snuggled up in the chimes, ready to stay safe from the oncoming Hurricane strength winds.

Said Twitter user Stephen R. Jaffe: So glad they found you. I always wonder where the little animals like the frogs and birds will go during the hurricanes. Some folks said Florida Wolfman should have euthanized the frogs, because they are an invasive species in the state and are apparently very destructive, but Florida Wolfman just couldn’t do it.

I understand these are invasive species yes, but I haven't the heart to kill them when they're just trying to survive like the rest of us. (FWIW, most of the species they compete with in my immediate area were estimated long ago…)

The Cuban tree frog is native to Cuba, the Cayman Islands and the Bahamas. Their coloration varies widely, white, gray, green, or brown and they can change colors. Some have splotches on their backs while others are a solid color. The state recommends that you euthanize the amphibian immediately and humanely once captured. It is illegal to re-release them. These frogs eat the native species, which is why euthanization is recommended when they are captured.

So I went to put away my wind chimes for #HurricaneDorian, and…