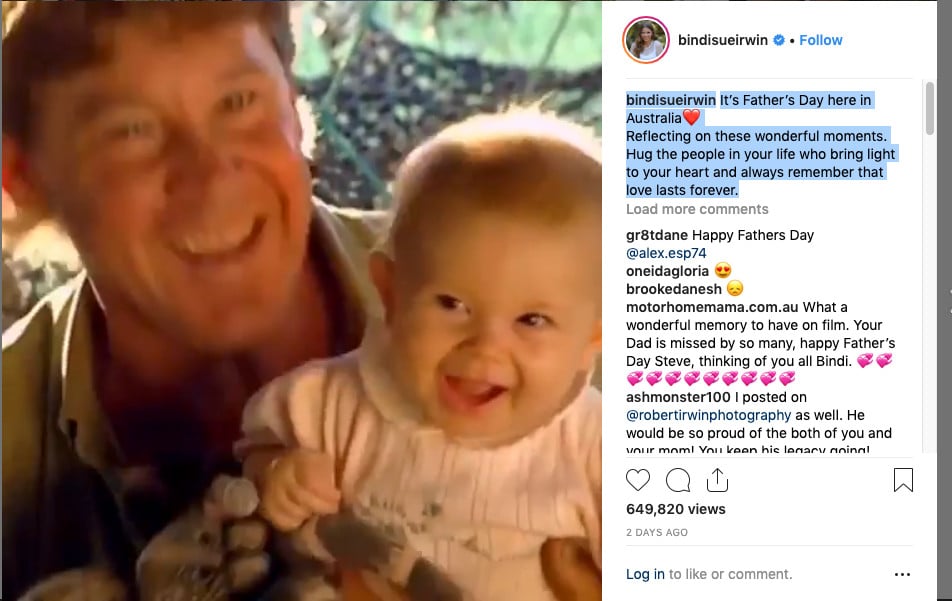 Bindi was just 7-years-old when her dad died.

Steve Irwin’s daughter Bindi shared on Instagram a video her late dad playing with her when she was just a baby. The post was uploaded to the social media site on September 1, Father’s Day in Australia.

"It’s Father’s Day here in Australia❤️ Reflecting on these wonderful moments," Bindi Irwin wrote on Instagram. "Hug the people in your life who bring light to your heart and always remember that love lasts forever."

The video is a sweet glimpse into the private lives of the Crocodile Hunter and his family, especially for those who were and still are fans of Steve.

When Irwin died, his wife Terri was left to raises their two children, and they left Animal Planet. In 2018, the family returned to the network with a new show.

“Steve Irwin was a champion for all wildlife and he and Terri’s excitement and enthusiasm brought viewers from around the world in touch with nature,” Patrice Andrews, Animal Planet’s general manager said at the time.  “Their passion for animals, love for their family, and leadership in conversation awareness left a strong legacy that continues today. We are thrilled to have Terri, Bindi and Robert back in the Animal Planet family.” In 2018, the family starred in "Crikey! It's the Irwins." The show was renewed for a second season on January 24, 2019.

It’s Father’s Day here in Australia❤️ Reflecting on these wonderful moments. Hug the people in your life who bring light to your heart and always remember that love lasts forever.