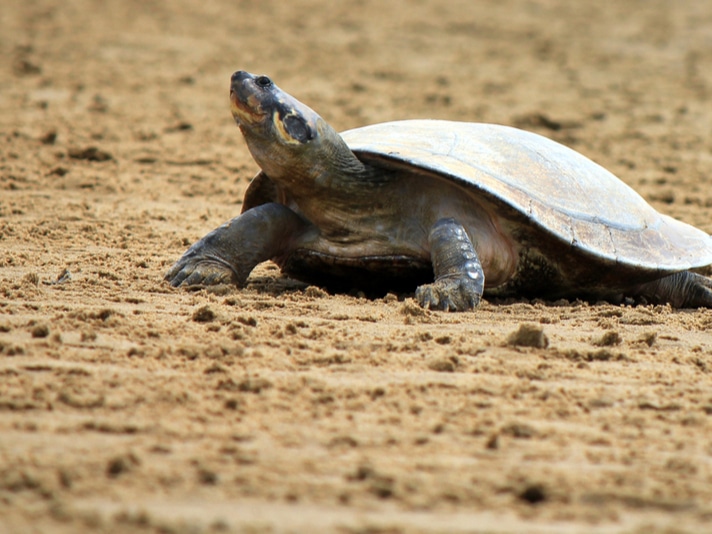 The South American river turtle is classified as critically endangered.

Drones oftentimes scare wildlife, but with this species at a safe distance there was no disturbances.

From distances of 20 to 40 meters above, the giant South American river turtle was not negatively affected.

The use of Unmanned Aerial Vehicles, (UAVs) or drones, have made their way from government use to hobbyists and now to scientists, who have been using the flying cameras in the sky for such things as conservation, management and research from marine turtles in Central and South America to whales. Researchers with the Wildlife Conservation Society in Brazil have now studied the effects of drone use on freshwater turtles in the Brazilian Amazon. The researchers are studying how the use of unmanned aerial vehicles can affect the behavioral patterns of the giant South American river turtle (Podocnemis expansa). The South American river turtle is classified as critically endangered.

The researchers flew the UAVs at a height of 20 meters and 40 meters when the turtles were both in the water and when basking during the nesting period and determined that the presence of the drones at those heights had no effect on the nesting turtles. No turtle sought refuge in the water when the drones were flying overhead. When used with marine turtles, it was determined that drones flying below 20 meters caused some disturbances with marine turtles.

The researchers also determined that the number of turtles detected did not significantly change during the sampling time with the UAVs. They concluded that the drone is an efficient tool for use in studying the freshwater turtle populations in the Amazon River and it can help provide critical data such as abundance of species, distribution, density, and reproductive behavior.

One of the most disheartening drone videos in recent times was that of a mother bear and her bear cub climbing a snow wall. The mother bear and baby climb up some rocks and then reach a wall of snow. The mother makes it up the wall but the cub keeps sliding down. When the cub nears the top, the drone operator comes closer and the mother bear takes a swipe at the drone, inadvertently sending her cub down the wall of snow yet again. The cub finally made it after several slides down the wall of snow, one which was unnecessary had the drone operator followed from a safer distance.

The complete paper, The Use of Unmanned aerial Vehicles (UaVs) To study a freshwater Turtle Population in the Brazilian Amazon” can be read on Herpetological Conservation and Biology.

The South American river turtle is the largest side-necked turtle in the world and the largest freshwater turtle in South America. Also called Arrau or giant Amazon River turtle, Podocnemis expansa can grow to about 200 lbs (90kg) and with a carapace length of 1.07 meters (3.5 feet). The mother turtle is known to emit a sound when her eggs begin to hatch, and the hatchlings are attracted to that sound. They stay together for a period of time before they go off on their own, according to researchers.