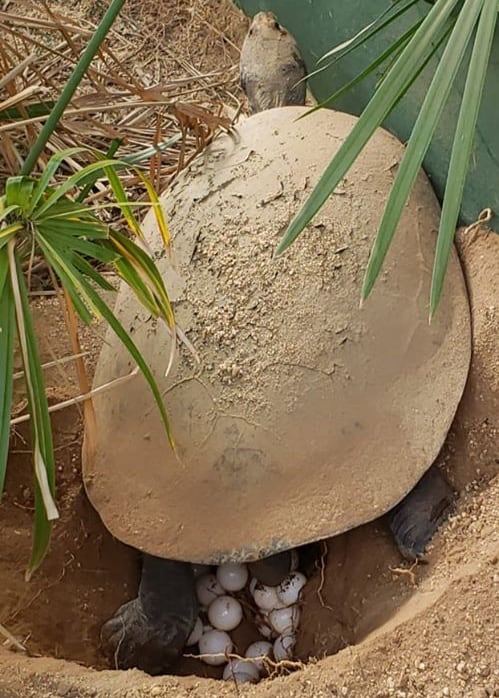 Zookeepers believe because of the lack of noise due to the lockdown, the turtle laid her eggs on land instead of water.

A South American river turtle (Podocnemis expansa) has laid a clutch of eggs on land, and zookeepers attribute it to the COVID-19 lockdown that closed the zoo. The closure halted foot and roadway traffic near the zoo and enabled the turtle to nest in peace, Sharleen Khan, zoological officer at Trinidad & Tobago's Emperor Valley Zoo wrote on Facebook.

Khan wrote zookeepers believe because of the lack of noise from the nearby roadways and less everyday sounds from visitors to the zoo, the turtle laid her eggs on land like she is supposed to rather than in the water, where she had in the past.

"Two weeks prior to her laying her eggs, Zoo staff noticed this large turtle quite often exiting her pond and finding her way onto a sandy bank," Khan wrote. "Then on Friday 3rd March at 5:30 a.m., the reptile was observed digging into the bank with her flippers and then started laying eggs – a process which lasted for 3 hours! Zoo staff continues to monitor both turtle and nest site."

Let's hope for a good outcome in these strange times!

The South American river turtle is the largest side-necked turtle in the world and the largest freshwater turtle in South America. Also called Arrau or giant Amazon River turtle, Podocnemis expansa can grow to about 200 lbs (90kg) and with a carapace length of 1.07 meters (3.5 feet). The mother turtle is known to emit a sound when her eggs begin to hatch, and the hatchlings are attracted to that sound. They stay together for a period of time before they go off on their own, according to researchers.