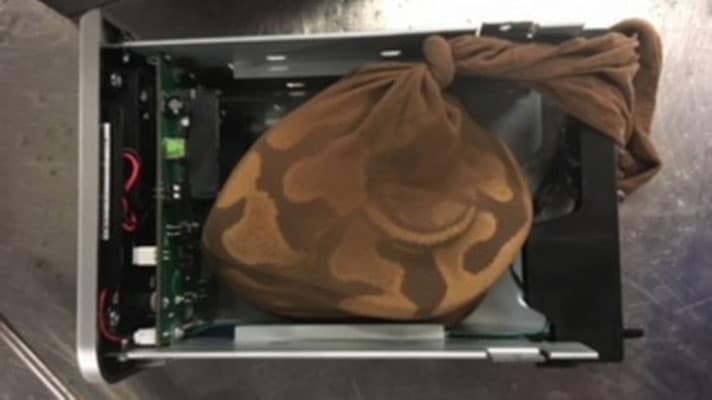 The snake was destined for Barbados when it was seized by the TSA.

The  Transportation Security Administration intercepted a most unusual pet at Miami International Airport in the most unusual of hiding places: a ball python (Python regius) hidden in an external computer hard drive enclosure. 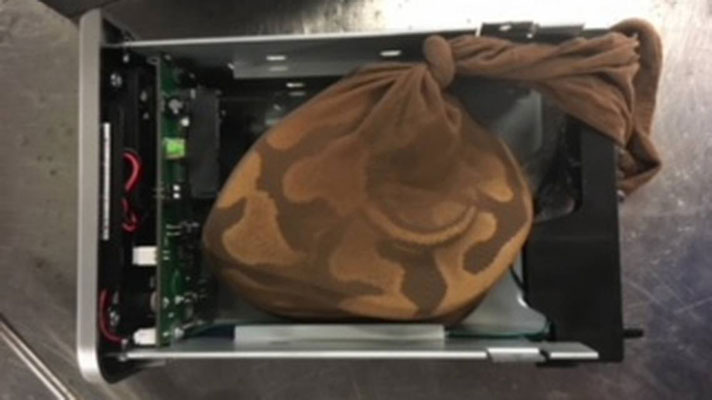 Someone tried to smuggle this ball python in a computer hard drive enclosure.

"The snake, that didn’t get on a plane thanks to our officers' diligent screening, had been artfully concealed inside the electronics of a hard drive and placed in a checked bag headed for a flight to Barbados," TSA spokeswoman, Sari Koshetz, told the Miami Herald July 9.

"Upon the TSA officer’s discovery of the organic mass, one of our TSA bomb experts was called into the baggage screening room to investigate the innards of the hard drive and that is when he discovered the mass was a live snake," Koshetz said.

The TSA contacted the U.S. Fish and Wildlife Service, which sent officials to the airport to pick up the reptile, which was encased in panty hose. The passenger who checked the reptile in didn’t make the trip to Barbados, nor did the ball python.

"No, turtles and snakes are not accessories permitted through our checkpoints," Koshetz told the Miami Herald.

Barbados doesn’t have a whole lot of native snakes, thanks to the introduction of the mongoose decades ago. The few snakes that are known to exist on the islands include the Barbados threadsnake, (Leptotyphlops carlae) known to be one of the smallest snake species, the blind snake (leptotyphlops bilineata), and the racer snake (Liophis perfuscus). The ball python was probably someone’s pet and it is unfortunate that someone tried to smuggle the animal to the island.