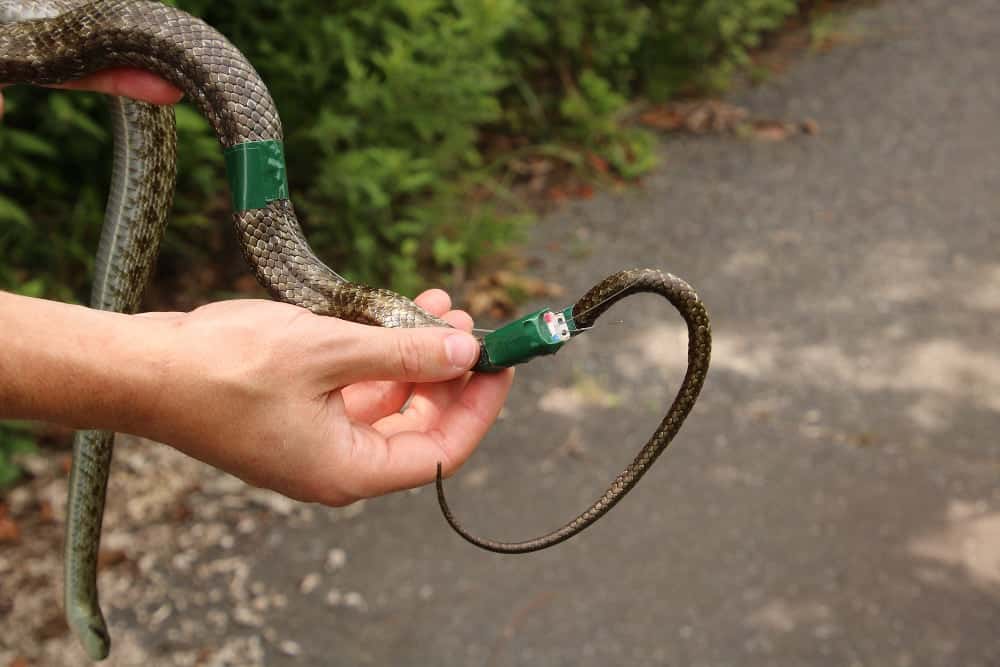 Snakes Tagged In Japan To Measure Radioactivity In Fukushima

Scientists in Japan have outfitted nine Japanese rat snakes (Elaphe climacophora and E. quadrivirgata) with tracking devices with dosimeters, radiation measuring tools, to get measure the radioactivity in and around Fukushima, nearly 10 years after the tsunami and nuclear disaster struck Japan.

The researchers outfitted the snakes with the equipment to determine how the reptiles are responding to radioactivity in the habitats in which they live. They chose snakes because they believe the reptiles are the perfect animal to determine how healthy the ecosystem is given the 2011 meltdown of the Fukushima power plant. Snakes are also predator and prey, so radiation could be measured up and down the food chain.

“Snakes are often understudied when it comes to other animals, but they are actually a vital part of many ecosystems,” said Hannah Gerke, lead author of the study and a former research assistant at the University of Georgia, told Gizmodo in an email. “They can act as both predator and prey in the food web, which means they have the potential to accumulate contaminants from prey they eat and also be a source of contaminants for other animals that eat them.”

In their three months tracking the snakes in the Fukushima Exclusion Zone (444 square miles or 1,150 square kilometers), the researchers determined that the snakes stayed in areas near streams, roads and buildings, grassland and to an extent, evergreen forest.

Snake on a Train, In Japan

Within the zone, not all areas are equally radioactive. Some areas have more radiation levels than others, and whether the reptiles traversed these areas gave the scientists a snapshot of exposure.

“We found that snakes moved relatively small distances and tended to spend more time close to streams, as well as in trees and abandoned buildings,” Gerke said. “Their limited movements mean that snakes could be useful bioindicators – meaning that the contaminant level of the snakes might indicate high or low contamination in the environment where it lives. However, we also found large differences in individual habitat use among snakes, which can lead to variation in radiation doses. For example, a snake that spends the majority of its time in the treetops away from contaminated soil might be exposed to less radiation than one that lives primarily in the ground.”

“Compared to other groups of animals like mammals, we know very little about how chronic radiation impacts reptiles or what levels are harmful to them,” Gerke said. “Our recent research is meant to draw attention to that lack of knowledge and provide a baseline that helps us determine what levels of radiation snakes might realistically be exposed to as they move throughout their habitat.”