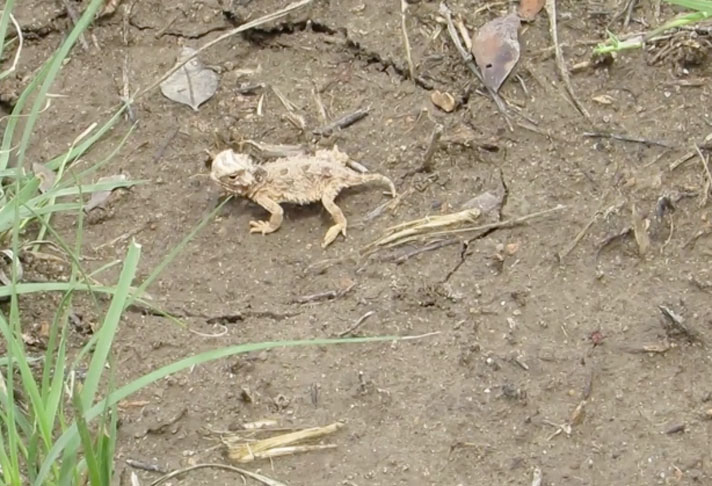 10 Texas horned lizards were tagged for tracking. One has since buried itself for the winter.

Biologists with the Texas Parks and Wildlife Department released 139 hatchling Texas horned lizards (Phrynosoma cornutum) in the Kerr & Mason Mountain Wildlife Management Area last September, 10 of which were outfitted with tracking devices in an effort to gauge their behaviors and to see if they survived. Previous releases were not successful. Officials said horned lizards already have high mortality rates even under good conditions.

Anyone out there wondering what ever became of the hatchling horned lizards that we released this year? Maybe it’s time for an update! If you have been following along, then you know that we released over 130 hatchlings on September 4th of this year. Ten of those hatchlings were tagged with harmonic radar tags and were released one day later than the others. Much to our surprise, a month later we still had 5 tagged hatchlings that we could locate. We knew that 2 had died, so 3 others were “missing in action.”

By November 9th, things had started to change. One lizard had apparently buried itself, three others appeared to have shed their tags (and probably the rest of their skin), but one lizard was still up and moving. In fact, we had a couple of hard freezes in November and were very surprised to find that that one lizard was still moving on November 16th and the 29th. Although it took a little convincing, that last lizard has apparently given up for this year also. On December 4th it was partially buried, and when we checked on the 13th it was completely buried. We now know a whole lot more about survival and movements of hatchling horned lizards than we ever knew before. We can hardly wait for next year!

By November, five were still being tracked by Texas Parks and Wildlife, and in early November, one individual had already buried itself for brumation, three lost their tags, due to shedding, and one was still moving about above ground November 29, in spite of several hard freezes last month, according to the Kerr & Mason Mountain Wildlife Management Areas Facebook page. Finally, on December 13, the little lizard had completely buried itself for winter.

The hatchlings, born at the Fort Worth Zoo this summer, are part of a state program to reintroduce the iconic reptile back into the habitats of Texas where they were once abundant. The lizard, was listed as a protected species by the state in 1967. In 1977, they were added to the threatened and endangered species list. The reptile has a range that extends into Oklahoma, but it has also declined, partially due to loss of habitat.