The female lizard was found in Cocoa Beach, FL with a visibly distended abdomen.

Snake on a Train, In Japan
Would You Poke A Reptile To Get The Photo You Want?
Dead 17-Foot Reticulated Python Found in Riverside Calif. Trash Dump

A northern curly-tailed lizard (Leiocephalus carinatus) with an extreme fecal impaction was found by researchers in Florida and unfortunately had to be euthanized due to its poor condition. The female lizard was found in Cocoa Beach, FL with a visibly distended abdomen. 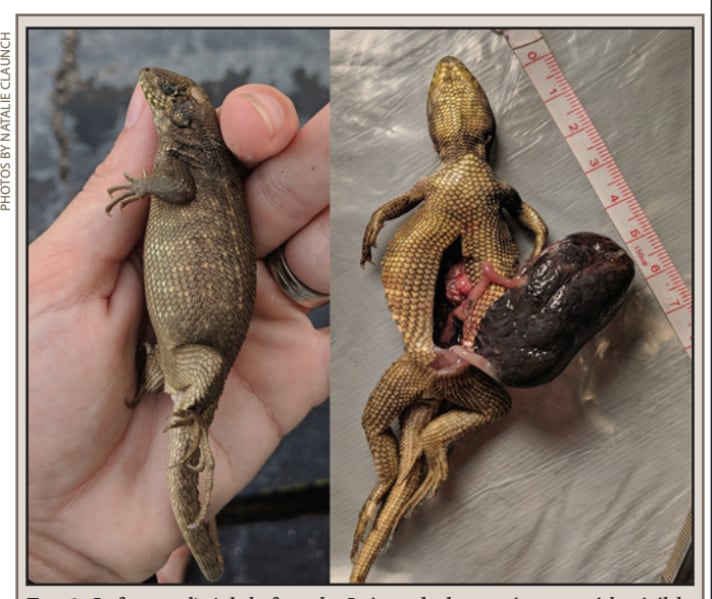 The female northern curly-tail lizard was found with a massive fecal impaction and was euthanized.

Researchers Natalie M. Claunch of the University of Florida, Ed Stanley of the Florida Museum of Natural History, and Christina M. Romagosa of the University of Florida dissected the reptile and found a putty-like fecal mass in its abdomen and its internal organs visibly atrophied, according to Natural History Notes. The fecal mass contained particulate  material that the researchers said resembled sand or dirt, and a skull of  an Anolis lizard.

The weight of the fecal bolus in the gastrointestinal tract was 22 grams, which is approximately 78.5 percent of the lizard’s total body mass. The researchers noted that to their knowledge, this lizard had the largest feces to body mass ratio in any living animal.

Northern curly-tailed lizards are native to the Bahamas, Cayman Islands and Cuba, and are an introduced species in the state of Florida. They were released in the 1940s in an attempt to control sugar cane pests. They have a snout to vent length of 10.5 cm, 26 cm including the tail.