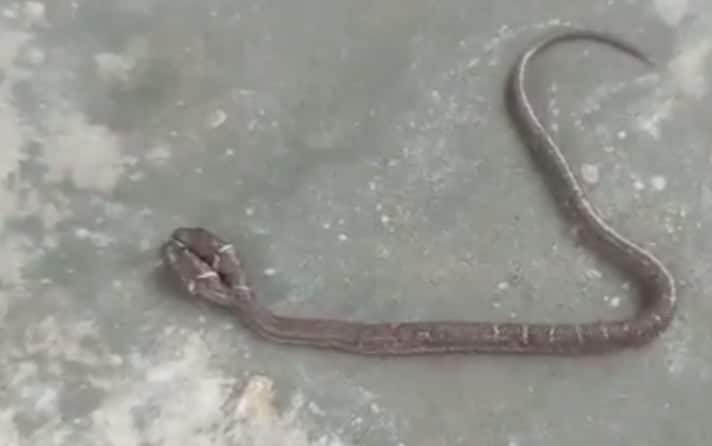 The non-venomous wolf snake looks like the venomous common krait.

A two-headed wolf snake (Lycodon sp.)that was captured on video was released back into the  Dehnkikote Forest range of Keonjhar district in Odisha, India. The snake was found in a house in the forest and the video was shared on Twitter by Susanta Nanda of the Indian Forest Service. The video was captured by a local first official.

A rare wolf snake with two fully formed heads was rescued from a house in the Dehnkikote Forrest range of Keonjhar district in Odisha.
Later released in Forests. pic.twitter.com/7fE0eMciEB

The video shows the snake on concrete, so it appears difficulty to navigate the man made material. The heads appear fully formed each with their own neck. Otherwise the snake appears healthy looking.

Wolf snakes are of the genus Lycodon and are colubrids. There are currently 64 recognized species of wolf snake. It is not known what species the two-headed snake is, though it does resemble the Indian wolf snake (Lycodon aulicus). The Indian wolf snake is sometimes mistaken for the common krait (Bungarus caeruleus), which is one of the big four snakes that inflict the most snakebites in India and Bangladesh.