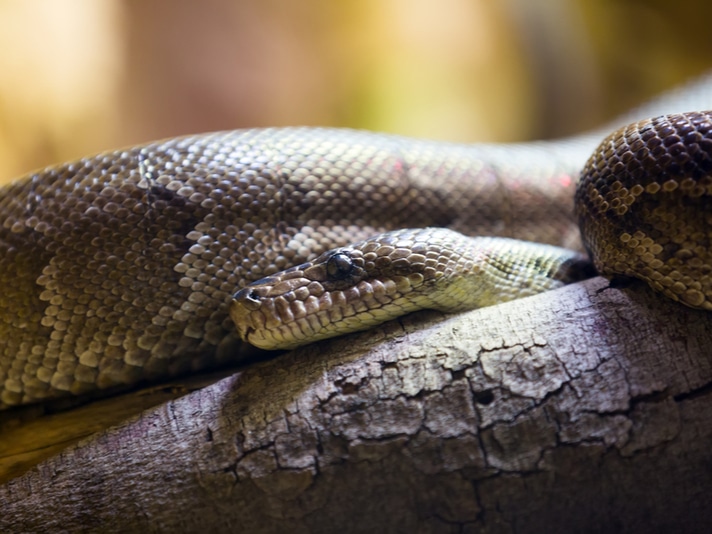 The Cuban boas will take the positions of other snakes into account when choosing where to set up their own ambush location.

Chinese Crocodile Lizard Listed 5th On EDGE List Of Endangered Reptiles
Video: These Snake Catchers In Singapore Get It Done Like A Boss
Aussie Discovers Tiger Snake In Her Christmas Tree

A new study of the Cuban boa constrictor (Chilabothrus angulifer) says that the reptiles hunt together in the caves in which their prey reside. According to study author Vladimir Dinets, the Cuban boa has the capability to coordinate their movements with other boas when hunting bats in cave passages.

Dinets, who published his findings in Animal Behavior and Cognition, found that when the snakes start to hunt, later arrivals form a barrier or fence, across the cave passages, blocking the flight path of the bats. This increases the hunting proficiency of the snakes, the study says.

When one boa occupied a certain sections of the cave roof, the others would position themselves in other locations based on when they arrived. Dinets noted that the maximum number of boas on a particular hunt was three. They would arrive to the cave passage 10-30 minutes before the bats would fly out of the cave in the evening, and 20 to 60 minutes prior to their return to roost. If the snakes arrived at the same time, they would position themselves in the same location in the passage, forming a barrier that Dinets says enhances their chances of success.  When a boa captured and consumed a bat, the snake then left the cave. No snake captured more than two bats during a hunt.

The study notes that boas will take the positions of other snakes into account when choosing where to set up their own ambush location, positioning themselves that forms a barrier across the cave passage, which Dinets says improves their chances of capturing a bat.

Loading...
Newer Post
Man Films Snake Regurgitating Snake In A Case Of Ophiophagy
Older Post
Man in Florida Gets Bit By Rattlesnake As He Tried To Kiss It
Advertisement