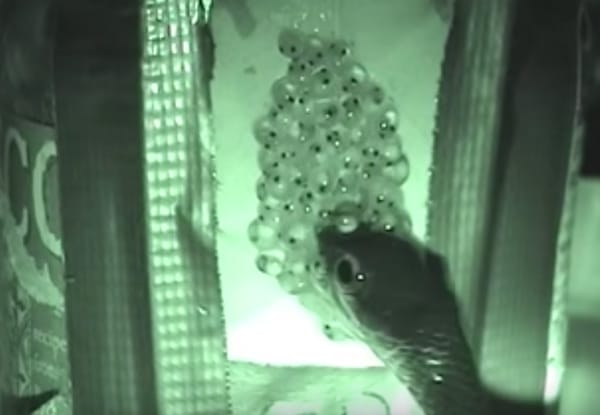 Red-eyed Treefrog Embryos Escape Predation While Still in the Egg

The red-eyed treefrog embryos can sense predators and escape from their eggsac.

Scientists have determined that red-eyed tree frog (Agalychnis callidryas) embryos can sense when they are being attacked and can escape their egg sac in just a few seconds, avoiding predation.

Researchers with Boston University used videography to capture red-eyed tree frog embryos escaping an attack from a tree snake in as little as six seconds after the snake started attacking the cluster of eggs.

“This escape hatching is a mechanism for running away from a really important predator,” Karen Warkentin of Boston University, said in press release put out by the university. But Warkentin and her fellow researchers were unsure how the embryos were leaving the egg sac, so they employed high speed cameras to capture the escape. “We had seen them thrashing around and we thought they were somehow breaking out of the egg,” she said.

The video revealed three stages the embryos went through to hatch: a pre-rupture stage; a shaking and gaping stage; and what the researchers described as a muscular thrashing to exit out of the hole that was created during the preceding two stages.

The researchers determined that the hatching glands are located on the snout of the embryos, are full of enzymes and most of the contents in the glands are released when attacked by a predator such as a snake or wasp.

An abstract of the research paper can be read on the Journal of Experimental Biology website.

Loading...
Newer Post
New Anole Species Discovered in the Dominican Republic
Older Post
What Would You Do if a Monitor Lizard is Knocking at Your Front Door?
Advertisement