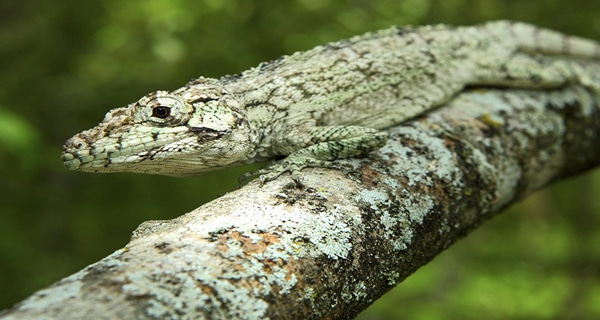 Anolis landestoyi is closely related to Chamaeleolis anoles of Cuba.

Researchers with the University of Toronto have discovered a new lizard species in the Dominican Republic that resembles a lizard species that is only found in Cuba.

The lizard, Anolis landestoyi is a big lizard that moves slowly amongst lichen-covered branches in its native habitat. It has been compared to the Cuban Chamaeleolis anoles and are closely related, according to a press release put out by the University of Toronto.

“Our immediate thought was that this looks like something that's supposed to be in Cuba, not in Hispaniola – the island that Haiti and the Dominican Republic share,” Luke Mahler, lead author of the study describing the new species said. “We haven't really seen any completely new species here since the early 1980s.” The lizard was first photographed by local naturalist Miguel Landestoy several years ago but the photo was grainy and Mahler didn’t think much of the lizard in the photo. A few years later, Landestoy captured one of the lizards and sent a better image to Mahler and others and when Mahler received the image, he thought  'what on earth is that!?.’

According to the researchers, the Greater Antillean anoles practice replicated adaptive radiation, which is when related species evolve on different islands and diversify into similar species that can be found in the same ecological niches. They have found this phenomenon has occurred with Anolis landestoyi and that of Chamaeleolis anoles, which look less like a typical anole and more like the slow moving chameleon, which is slow, large and cryptic. Anolis landestoyi is also prone to be found in lichen-covered branches in high forest canopies. If you look at the accompanying photograph, you can see that type of adaptation. Notice the coloration of Anolis landestoyi with that of the tree branch.

Mahler says that Anolis landestoyi is already at risk, considering that it is found in a unique habitat in a small region in the western Dominican Republic. This area disappearing due to illegal deforestation, Mahler said.

“We don't know if it's convergence or the fact that it’s pretty closely related to Chamaeleolis, which may have colonized Hispaniola from Cuba,” says Mahler. “But either way, things are more similar across these two islands than we thought.”