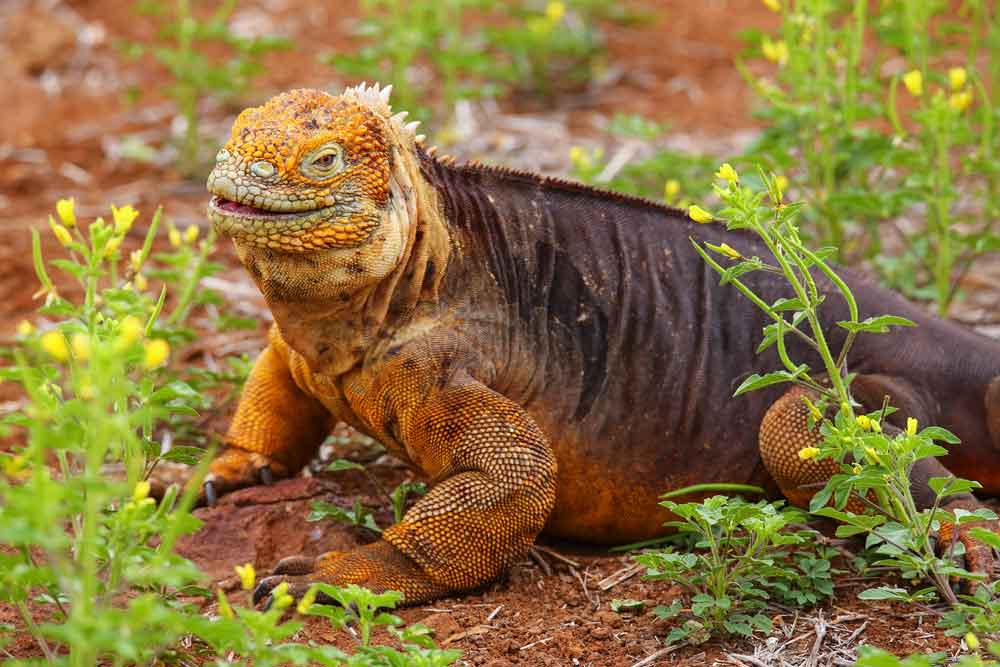 The Galapagos land iguana is one of the largest lizards in the world and grows to between 3 to 5 feet in length.

The Galapagos land iguana (Conolophus subcristatus), a large lizard of the family Iguanidae which was extirpated from Santiago island 187 years ago, appears to be making a comeback thanks to some captive breeding and release efforts by Galapagos Island conservationists.

In July, researchers and park rangers walked 13.9 square miles of the island and found various ages of healthy land iguana, including many that were unmarked by researchers, indicating that the species has been successfully reintroduced, with natural breeding occurring on the island. Since 2019, the Galapagos Conservancy and partners released more than 3,000 land iguanas on the island. This occurred after the removal of invasive species, including feral pigs, cats, goats and donkeys that had been introduced decades ago by people.

The conservancy will monitor the activities of the iguanas as they adapt to the ecosystems of Santiago island. “There has been evidence of reproduction of the iguanas in Santiago, which indicates that their reintroduction process has been successful,” Dr. Jorge Carrión, director of conservation at the Galápagos Conservancy said in a statement on the conservancy’s website. The iguanas have already started having a positive impact on the island’s ecology.

“They have opened paths, removed the earth, dispersed the seeds, and this is changing the dynamics; but the greatest results will be observed in a few more years,” Dr. Luis Ortíz-Catedral, scientific adviser of the Galápagos National Park Directorate (GNPD) who was also responsible for the July expedition, said.

“The process of ecological restoration of Santiago Island began several decades ago when efforts began to eradicate the populations of feral pigs, goats, and donkeys, an objective that the GNPD achieved in 2006. Although the challenges to restore the ecological integrity of the island entirely are still large, the return of the Land Iguanas is a key step, as it represents giving back to the ecosystem the missing piece to reestablish its integrity,” Wacho Tapia, general director of the Galápagos Conservancy said in the statement.

The Galapagos land iguana is one of the largest lizards in the world and grows to between 3 to 5 feet in length. It can weigh close to 30 lbs. Primarily herbivorous, the land iguana feeds on prickly pear cactus, its primary source of food, as well as insects centipedes and dead animal matter. They can live more than 50 years and are sexually mature at between eight to 15 years.