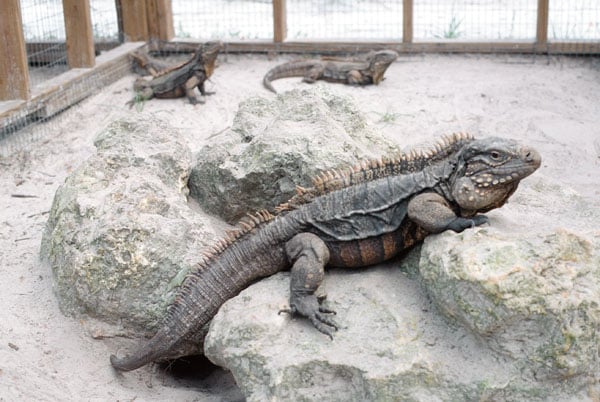 Cuban rock iguanas (Cyclura nubila nubila) are one of nine ground iguana species endemic to the West Indies, a large group of islands located in the Caribbean Sea off the southeast coast of Florida. All nine are in the Cyclura genus, and they are globally endangered with some in imminent danger of extinction.

Of all the rock iguanas, the Cuban rock iguana is the most common, with a population likely exceeding 40,000 lizards in the wild. These rock iguanas are virtually all over the island of Cuba in disjunct colonies. All live along coastal areas with sandy, rocky beaches. Hundreds of small islands and cays located around Cuba also hold rock iguana populations. Even though they are still abundant in many areas, the population is thought to be declining throughout its range.

In the 1960s, a small group of Cuban rock iguanas were released from a zoo on Isla Mayaguez located off the south west coast of Puerto Rico. Today this population may number more than 700 lizards. Virtually all the Cuban iguanas in herpetoculture today derived from this feral population on Isla Mayaguez. Interestingly enough, the complex social expressions—head bobs, wobbles, etc.—have changed dramatically from their Cuban relatives during a little more than 50 years of isolation.

This species, like all Cyclura, has a long life span, living to be 60 to 70 years old. 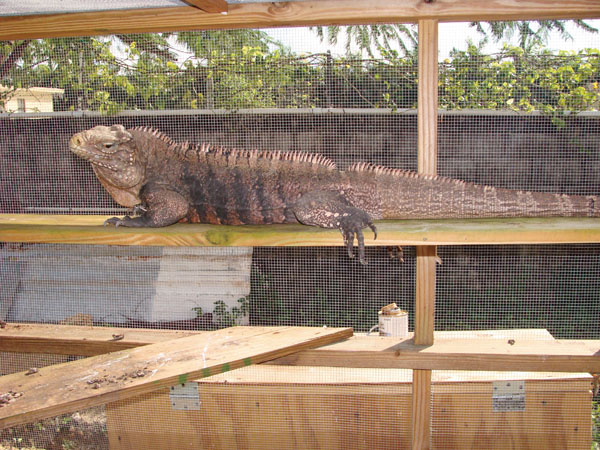 A basking site of 120 degrees Fahrenheit or more is a must for this lizard.

The Cuban iguana’s eyes have a golden iris and the sclera is red, giving it the appearance of having a hangover. These diurnal lizards bask and feed in the daytime only. Located directly on the top of their head is a photosensory organ that looks like a light-colored scale. Called a parietal “eye” or pineal gland, it is also sometimes called the “third eye.” The parietal eye cannot form images but is sensitive to light and dark and can also detect movement. It is used primarily for thermoregulation.

Cuban rock iguanas are primarily herbivorous and have to eat much more food than a carnivore to satisfy their nutritional needs. Osmoregulation is somewhat of a problem. When you see your Cyclura “sneeze,” it is actually getting rid of excess nitrogenous wastes, such as as urate salts and waste, from its nostrils. Sometimes you can see this crusty salt if you look carefully around the nostrils. If Cyclura or other animals that live near salt water couldn’t expel that salt, they would eventually die from a high level of salinity.
In nature, much of a Cuban’s diet is comprised of large amounts of vegetation that contain little nutritional value. Given that they live only on the coast and on outlying cays, even mangrove tree leaves are consumed. In captivity, feed your iguana a wide variety of green and yellow vegetables, such as collards, dandelions, squash, romaine lettuce, green beans, etc. Feed kale and spinach only about once a week at most, because these vegetables bind calcium, and if fed as a steady diet, they may deplete calcium stores in the iguana’s body. 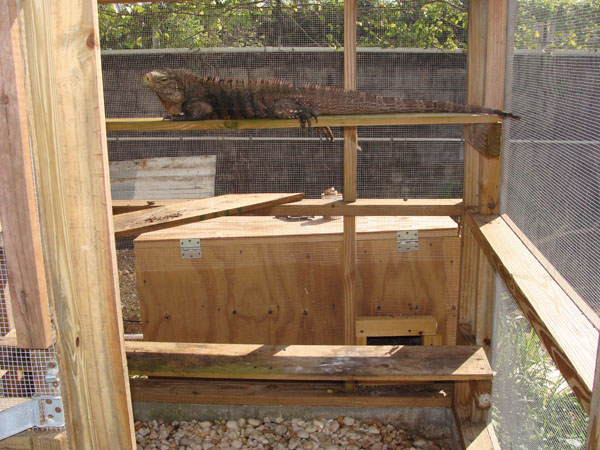 Iguanas require hides, like the wooden one pictured under this Cuban, to feel safe.

Although Cuban rock iguanas will eagerly eat small rodents and insects, these should be fed only about once a month, as a diet heavy in protein may damage the kidneys and cause renal failure in extreme cases.

I feed my Cyclura all they can eat about three to four times a week. In addition to vegetables I feed them Mazuri Iguana Diet; a typical serving would be about one handful per adult lizard per feeding. If you’re going to feed rodents or insects, give them to adults only about once per month and juveniles once per week. I’ve experimented with feeding Cyclura small amounts every day to only two large feedings weekly. I have found that feeding them all they can eat every other day works best for my schedule, but you can feed them daily if that works best for you. 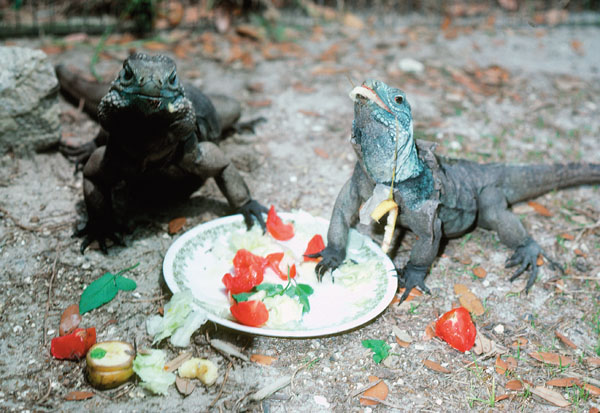 These herbivores require a large variety of green and yellow vegetables.

I provide a calcium supplement once a week. Gravid females receive supplementation twice a week or as needed. For example, after a female lays eggs, I give her more calcium than normal for several weeks after egg deposition. How long to offer increased calcium is based on how the lizard looks after laying eggs. If a female bounces back quickly, resume the normal supplementation regimen.

Given that wild Cuban rock iguanas live in xeric areas, water is not a big issue. I keep a water bowl in the enclosure at all times, but most Cyclura get their water from the food they eat. These lizards have no need to be soaked and should not be soaked. Occasionally you may mist them (especially juveniles), but their water requirements are minimal.

All rock iguanas are hardy and can be long-lived pets. However, these large lizards have complex captive requirements. Adults require an enclosure measuring at least 8 to 12 feet in length and 4 feet wide. Although not arboreal as adults, they should have a reasonably tall cage of 5 to 6 feet in height. This is to accommodate shelving that can be used for basking or visual barriers. 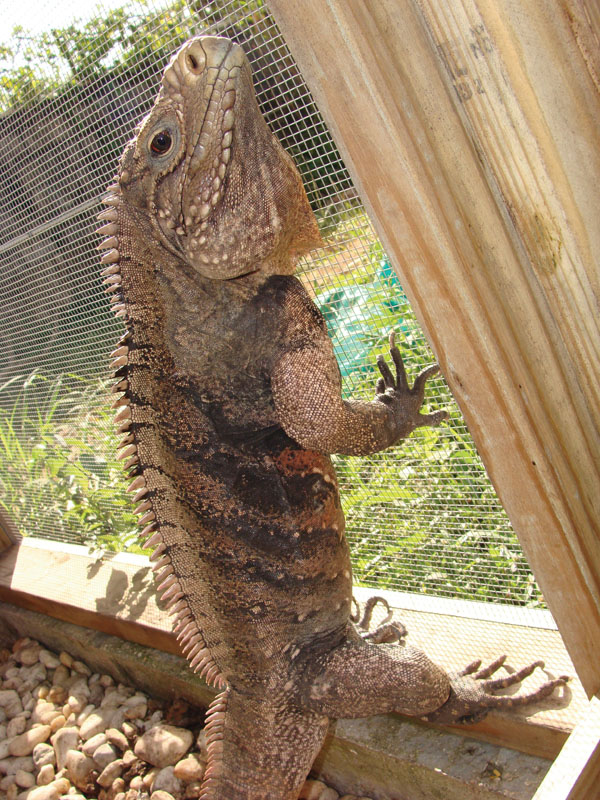 This Cuban rock iguana displays the brick-red coloring common in many specimens in the hobby.

Heat is extremely important to these diurnal lizards. They spend a great deal of time basking and require a basking site heated to a minimum of 120 degrees Fahrenheit. Hatchlings and adults have the same heat requirements. For a hatchling, a single light would suffice, but adults need several heat lamps to achieve the desired result. When a single light is used to heat a large lizard, many times the lizard will bask under the light so much that it will suffer severe burns resembling a circle on the area where the light is concentrated. One light is too small to adequately heat the entire lizard, and the parietal eye discussed earlier is not engaged. The lizard feels the warmth but doesn’t realize it’s being burned. This is also why you may see captive lizards with scarred legs and stomachs when hot rocks are used as a primary heat source. Cuban rock iguanas must be able to cool down at will. During the day, the cool end of the cage shouldn’t be more than about 80 degrees. It is extremely important when keeping Cyclura to allow them to be able to thermoregulate.
Substrate can vary, but for hatchlings I use alfalfa pellets, which is often sold as rabbit food. If it’s accidentally ingested, it won’t cause a blockage.

The name “Cyclura” derives from the ancient Greek words “cyclos,” which means circular, and “oura,” meaning tail. The species name, “nubila,” is Latin for gray. The literal translation for the Cuban rock iguana’s full scientific name would be: “round-tailed gray lizard.” However, these living dinosaurs are anything but all gray in coloration. In actuality, many Cuban rock iguanas exhibit some brick-red color, and some exceptional individuals even have a fair amount of blue coloring as well.

All rock iguanas can withstand reasonably cold temperatures. I’ve kept and bred Cyclura for more than 30 years in southern Florida, with only a wooden box containing a 100-watt bulb as an overnight heat source in the winter. This “retreat box” can also be used as a nest box. During the day the iguanas emerge from it to warm up in the sun. Many times my lizards have been in temperatures that dipped below 50 degrees, and they still thrive and reproduce today.

Cuban rock iguanas should be provided with a retreat of some sort, which can double as a sleeping spot. It should measure at least 4 feet long, 2 feet wide and 2 feet tall. I recommend a hinged lid, with an entrance hole cut near the top that is slightly larger than the iguana’s widest point. I cover the bottom with an 18-inch-deep mixture of potting soil and sand.

Every time you pick up your hatchling Cyclura it thinks it’s going to be killed and eaten. The best way to tame your iguana is to let it adjust to its new environment, and let the lizard come to you.

At first, it likely won’t even eat when you’re present, but over time it will come to associate you with food. When that happens, the battle is won. This usually occurs when the lizard is 2 to 3 years old and 2 to 3 feet long. Generally speaking, the smaller the lizard, the more hyper it is. As it grows, it generally becomes more calm and personable. If you’ve done your job well, the iguana will be a tame, inquisitive and personable lizard. The Cuban rock iguana is one of the easiest Cyclura species to tame, and this makes for a very rewarding relationship between the keeper and the kept. 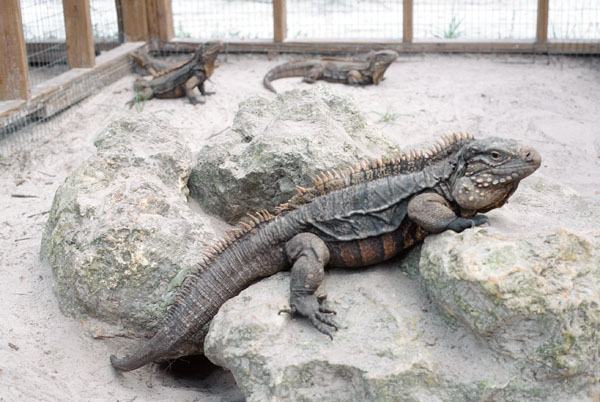 I should also add, however, that an adult Cyclura has a powerful bite that could easily sever a finger or toe. If you’re ever attempting to handle a large, angry lizard, take care to avoid that bite. Wear heavy leather gloves, and grab the lizard behind his head while securing its hind legs. Generally speaking, it is the claws on the hind legs you have to worry about and not so much the front legs.

In summary, Cuban rock iguanas are large lizards that require a lot of space. Once their somewhat complex husbandry needs are met, they are very personable and make great long-lived pets. If you’re considering adding a Cuban rock iguana or any Cyclura species to your herp collection, all of these factors should be taken into consideration before purchasing one. Remember, that cute 12-inch baby will become a 3- to 4-foot-long living dinosaur. Be prepared to meet the needs of an adult iguana that may live as long as you do!

TOM CRUTCHFIELD has been a herpetoculturist for almost 40 years and is one of the founding fathers of the industry. Tom was the first to breed the Grand Cayman blue iguana, and he is the only one breeding albino green iguanas in captivity. He resides in Homestead, Florida, where he breeds rare, high-end herps. Visit him online at tomcrutchfield.com.