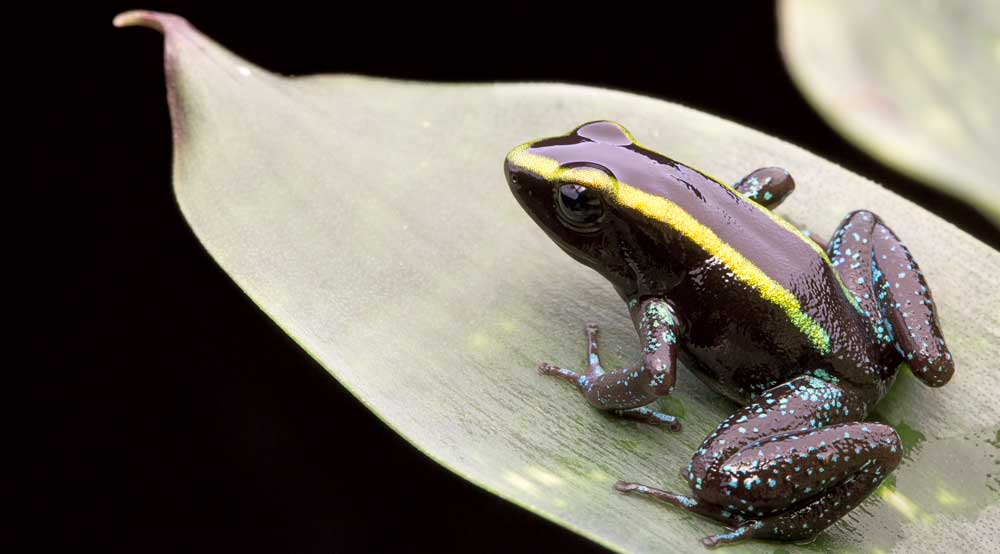 Despite their name, poison dart frogs are known to be non-toxic when kept as pets, as they are all largely captive-bred.

Frogs contribute much to science and their habitats are being threatened by development.

Despite their name, poison dart frogs are known to be non-toxic when kept as pets, as they are all largely captive-bred.

Poison dart frogs are colorful and beautiful to see in a forest floor themed bio-active terrarium set-up. There are many colors and patterns available to herp hobbyists, and the fact that they’re active during the day makes keeping them more fascinating. Despite their name, they are known to be non-toxic when kept as pets, as they are all largely captive-bred.

Naming these frogs as such is however no misnomer. The poison dart frog family scientifically known as Dendrobatidae has 16 genera, with about 200 species. [1] And how they got their nickname may only be credited to three species that the Embera people of the Choco department in Western Colombia used to tip their blow darts in hunting small game and birds. They are Kõkoé (Phyllobates aurotaenia), (2) Black-legged poison dart frog (P. bicolor) and (3) Golden poison arrow frog (P. terribilis). [2] 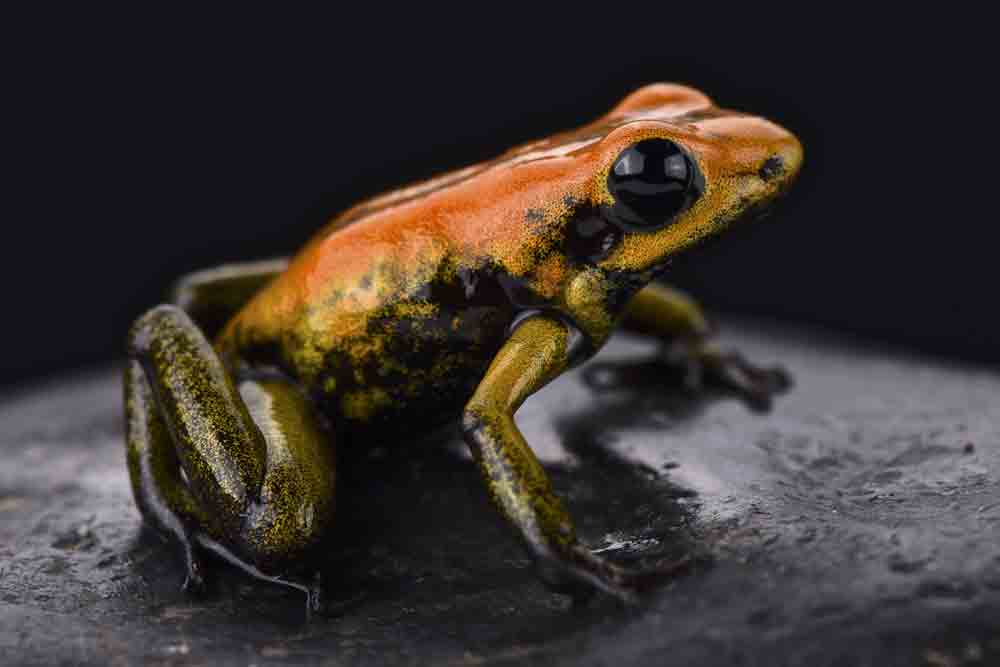 The Embera Choco Indians of Colombia use two separate methods of charging their blow darts with poison. P. aurotaenia and P. bicolor are confined in a hollow cane and are regularly fed until it’s time to use the poison. Then they take the frogs and impale them with a wooden stick called ‘siurukida’ entering the mouth and exiting the legs and held over a fire until they secrete a white to yellowish frothy liquid from their back glands. This toxic liquid is then rubbed onto the grooved tip of about two dozen 9-inch wooden darts and let dry. [2]

The second method which is simpler is to apply the poison straight by wiping the darts on the skin of a living P. terribilis. Phyllobates terribilis are collected from the surrounding forest and kept in wicker baskets with the cover tied. When it’s time to charge the darts, the frog is allowed to emerge from the basket and is caught between two leaves and kept in place by a stick held under foot. The darts are then rubbed against the frogs back. A single frog can charge up to three darts with poison. The darts are then stuck poisoned end up into a green plantain banana to dry. The frogs are then allowed to hop away. [2] 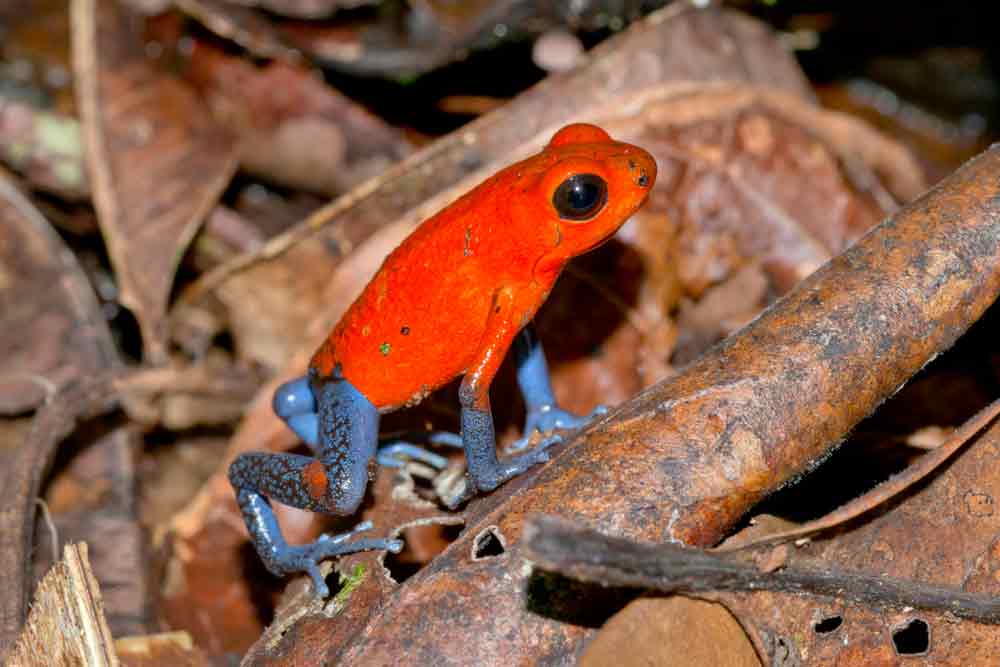 This discovery by the Embera people led to several expeditions to the jungles of the Choco region of Western Colombia by researchers from the National Institute of Health (NIH) and subsequently led to the discovery of four steroidal alkaloids, most significantly the toxin later known as Batrachotoxin (BTX) by Fritz Märki and his colleague Bernhard Witkop in 1962. [3]

Batrachotoxin is one of the most potent toxins known to science. Two milligrams of poison from a single frog can kill at least 20,000 mice or six to seven average-sized people. In medicine, it is used in the study of sodium channels and their interaction with local anesthetics, anticonvulsants, antiarrhythmic and other drugs. [3] In 1964 and 1966 another researcher from the NIH named John Daly who was studying the toxin and named it Batrachotoxin from the species Phyllobates aurotaenia. Charles W. Myers, a herpetologist who was studying reptiles and amphibians in Panama invited Daly to collaborate with him in studying the toxicity of the Panamanian strawberry poison frog (Oophaga pumilio, formerly Dendrobates pumilio). Surprisingly they did not find the alkaloid Batrachotoxin. They discovered a relatively toxic alkaloid Pumiliotoxin having marked myotonic/cardiac activity. It affects the calcium channels, interfering with muscle contraction in the heart and skeletal muscle. [3] 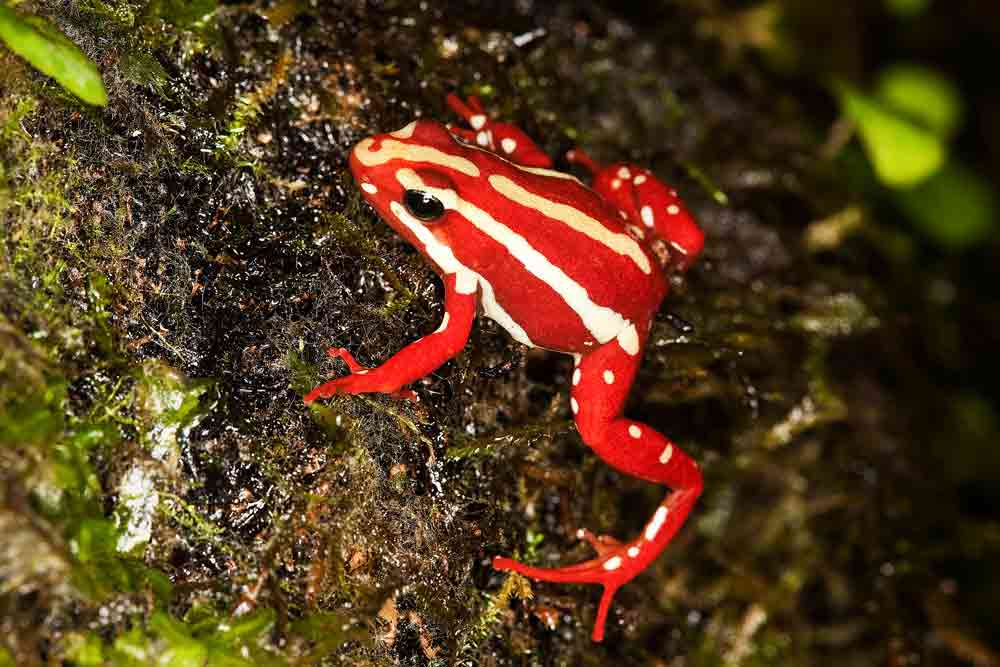 The initial collaboration and friendship of 30 years between John Daly and Charles Myers, extended the study of 60 other species of frogs in the Dendrobatidae family and the discovery of 500 alkaloids that have not been found elsewhere in nature. [3]

They also found out that the Dendrobatid frogs apparently do not synthesize the alkaloids and sequester them unchanged in their skin glands from their food source. This was proven true when they made the most relevant discovery among the frog skin alkaloids. [3]
In 1974, Daly and Myers embarked on a trip to Southwestern Ecuador to analyze the alkaloids present in the skin of the Phantasmal poison frog (Epipedobates tricolor) found in the Rio De Jubones near the Peruvian border. Through their initial analysis they discovered an alkaloid with a potency that’s 200-fold higher than morphine and 30 times higher than nicotine’ This alkaloid is called Epibatidine. [3]

During that same collecting trip, Daly and Myer visited a highland roadside where the Epipedobates tricolor are abundant and gathered 60mg of extracts from the skin of 750 frogs. The chromatography test was able to isolate four alkaloids including Pumiliotoxins which was discovered back in the 60s. And more importantly they found chlorine-containing alkaloid Epibatadine. [2] Its formula C 11 H 13 N 2 Cl and its chemical structure was only established in 1992. [4] 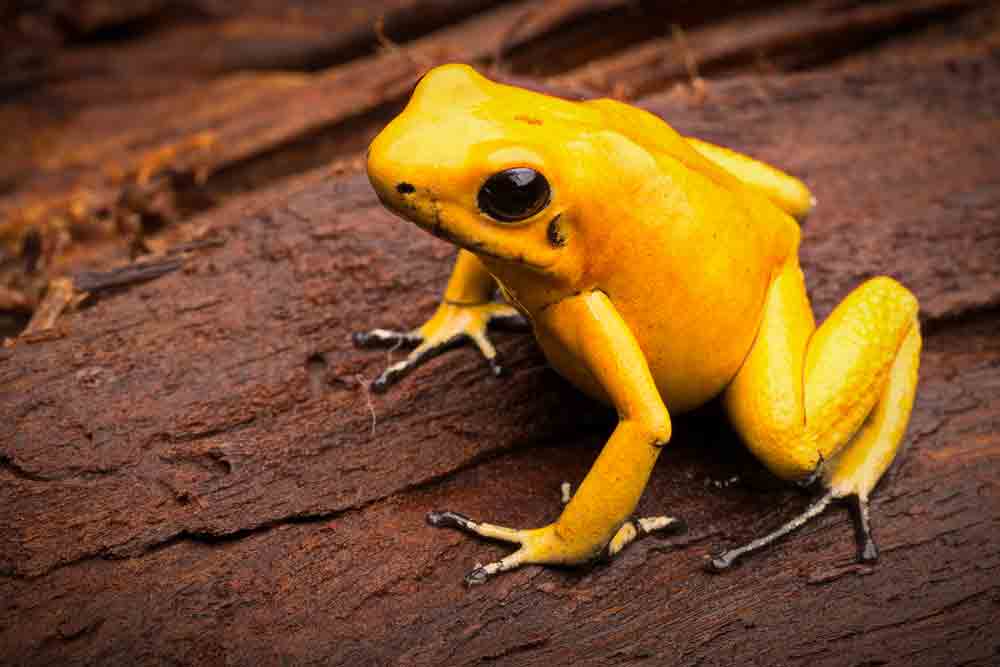 Epibatadine is a natural alkaloid that has an analgesic effect that is 200-folds more potent than morphine. It was discovered to be non-opioid [5] suggesting a novel way to treat severe pain without the adverse effects of morphine. However, during a hotplate assay, it was found to be highly toxic, causing hypertension, respiratory paralysis, seizures, and death at doses not much higher than the effective antinociceptive dose. [6]
Because of Epibatidine’s toxicity, further therapeutic has been put to a halt. More recently, scientists, through chemical manipulation developed synthetic derivatives of the Epibatidine such as ABT-594 and ABT-418. ABT-594 can’t be used for humans due to its gastrointestinal side effects. [7] ABT-418 has nootropic, neuroprotective, and anxiolytic effects and is being studied to potentially treat Attention-deficit/hyperactivity disorder (ADHD) in adults. Side effects include nausea, headaches, or skin irritation. It is unclear if ABT-418 will continue clinical development or a replacement drug will be used instead. [6]

Several other alkaloids are found in the skin of the of the Dendrobatid frogs, most them undefined and with no chemical structures. And there will most certainly be more to be found. Some will land in a petri dish at the NIH. Some will remain unknown. What we know though is that frogs contribute much to science and their habitats are being threatened by development.