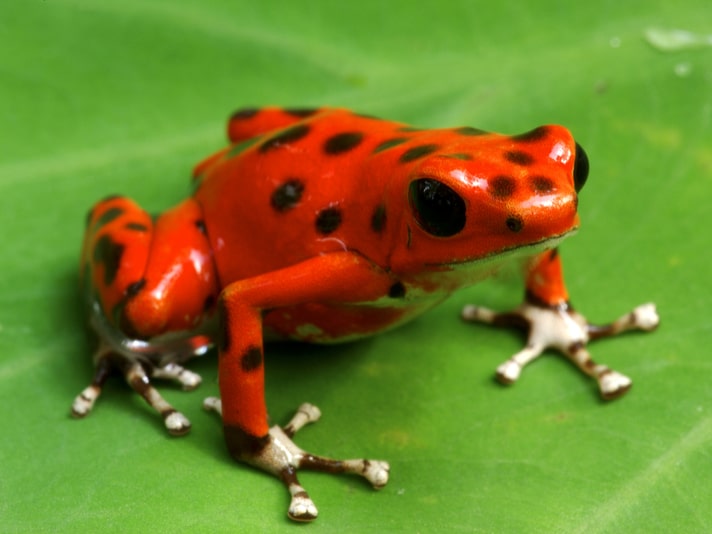 The strawberry poison frog (Oophaga [Dendrobates] pumilio) is a member of the family Dendrobatidae. They are variable in color and pattern, and many morphs appear in the hobby.

The strawberry poison frog (Oophaga [Dendrobates] pumilio) is a member of the family Dendrobatidae. They are variable in color and pattern, and many morphs appear in the hobby.

Strawberry poison frogs measure from three-fourths to an inch in length, and typically females are slightly larger than males. It is difficult to sex these frogs on size alone. Differentiation between males and females generally requires listening for the buzzing, cricketlike call of males.

Oophaga pumilio are found in the lowland forests of northern Nicaragua through Costa Rica to western Panama. The species is thought to feed primarily on spiders, ants, termites and other small invertebrates in the wild. Excellent eyesight allows them to capture prey with their sticky projectile tongues. 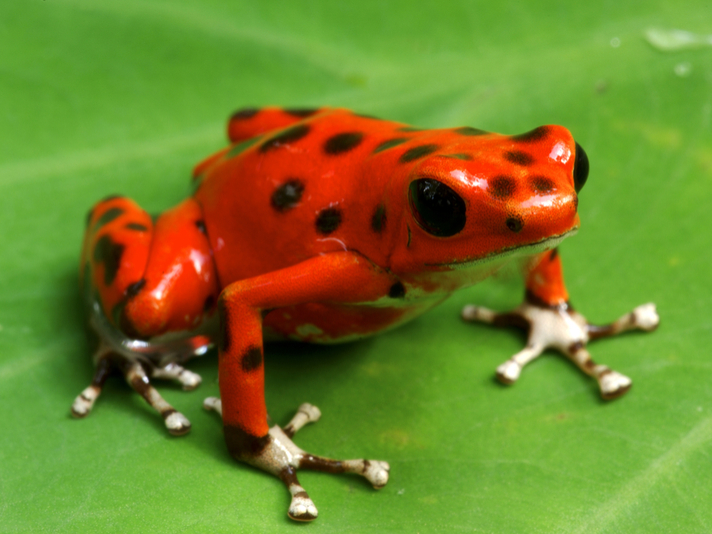 Courtship in strawberry poison frogs is an elaborate process. Males call from a suitable location, such as a bromeliad leaf or similarly elevated site. An interested female then approaches, and a male’s continued vocalizations signal her to follow him to a suitable spawning location, often a bromeliad leaf near the water-filled center.

Eggs are deposited singly to minimize competition for the limited resources a bromeliad environment supplies. Initially, the male protects the clutch and keeps eggs hydrated by expelling water from his vent. Tadpoles hatch in 10 to 12 days, and at this point the female assumes responsibility for their care. Females will actually produce “food eggs” on which the larvae feed almost exclusively.

Poison frogs are challenging to maintain in captivity, and O. pumilio has long been considered one of the more difficult species. Only recommended for advanced hobbyists, they have very specific requirements.

A variety of substrates suit their needs, including everything from simple paper towels for juveniles and recently acquired specimens to more natural substrates for established animals, such as peat or green moss, coconut coir, or a mixture of coconut coir and orchid bark.

Having a drainage layer at the bottom of the enclosure is important. It can be made using either large-grade pea gravel or LECA, expanded clay pellets. Cover this layer with fiberglass window screening to prevent the finer upper substrate from filling the gaps in the drainage layer.

Place a number of large magnolia and oak leaves on the substrate’s surface. Doing this allows the frogs to hide, and it also sustains small invertebrates on which the animals can feed opportunistically.

Suitable plants for their terrarium include creeping fig, philodendron, pothos and other low-growing varieties. Bromeliads work especially well with this species because they frequently use them as retreats and usually for reproduction.

If you keep the frogs in a planted terrarium, make sure to provide a good light source to keep the plants healthy. Although live tropical moss is difficult to maintain, some frogkeepers enjoy placing it on the surface of the substrate. Pillow moss (Dicranum spp.) is widely available and adds a nice accent to the terrarium.

Use dechlorinated tap water or spring water to mist the enclosure. You can dechlorinate tap water using an aquarium product found at your local pet store, or simply set the water out for 24 to 48 hours, which allows the chlorine to evaporate. It is important to have a shallow water dish or area, but keep in mind that these frogs are poor swimmers. The water level should be no higher than three-fourths of the frogs’ standing height.

A vertically oriented, 10-gallon terrarium comfortably houses an adult pair. Providing the necessary height and plenty of space on which to establish territories, a standard 20-gallon aquarium can also be used to house up to four individuals.

Due to the size of O. pumilio, smaller prey items are a must. Fruit flies, pinhead crickets, termites, aphids and other small food items are good for captive adults. Small fruit flies, such as the Turkish glider strain of Drosophila melanogaster, and springtails are generally considered the staples of their captive diet.  For adult frogs, dust fruit flies with a vitamin and mineral supplement once weekly. Dust the insects every other feeding for young, growing frogs.

Feed these active, diurnal frogs three to four times weekly as a starting point. Because the frogs’ food requirements vary with age and activity levels, monitoring the number of flies in their terrarium is important. No more than a few flies should be left from the previous feeding before you add more to the enclosure.

Wild-caught and farm-raised Oophaga pumilio have long been the primary source of animals available in the hobby. Significant numbers are still imported, but these individuals are often stressed and difficult to establish in captivity. Fortunately, captive reproduction is on the rise. Even though reproductive rates are slow and captive-bred individuals can be expensive, given the difficulty in propagating neonates, it is worth the extra money to purchase captive-bred frogs. They make more successful captives than wild-caught or farm-raised individuals. Find them by speaking with local herp societies and by searching for reputable breeders online.

Never mix wild-caught or farm-raised frogs with captive-bred animals. Aside from the health risks, maintaining the purity of various lines cannot be stressed enough because the wild status of many of these animals is at best uncertain. Frogkeepers must maintain careful records of the origin of their collection, and communicate this with others interested in breeding and promoting conservation of these magnificent frogs.

Oophaga pumilio froglets can be challenging to rear. They present a number of medical problems, including calcium deficiency, parasitism and unexplained failure to thrive. Dead specimens should be submitted to a veterinarian for an evaluation of the disease process behind their demise. It can help prevent the death of additional specimens, and it allows the frogkeeper to make the necessary changes in husbandry before experiencing additional problems.

Small and inquisitive, Oophaga pumilio is one of the most spectacularly diverse anuran species. This, coupled with their bold nature and intricate behavior, makes these animals one of the most desirable of all captive amphibians.