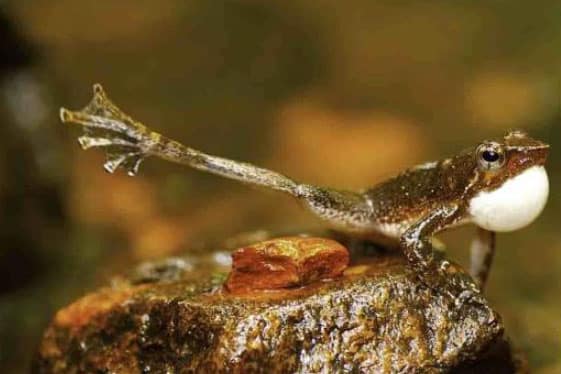 They are named dancing frogs due to the male's leg kicking during breeding season.

Scientists with the University of Delhi in India have discovered 14 new species of frogs that are known to "dance" during courtship. The frogs, of the genus Micrixalus are known as much for their "dance" moves, which comprises the shaking or kicking of their legs like Elvis Presley in attempts to attract mates.

The frogs are found in the environmentally diverse hotspot of India's Western Ghats mountain range, where dozens of frogs have been discovered over the last several decades. According to University of Delhi Professor Sathyabhama Das Biju, the males are the only ones that do the dance, which is called foot flagging whereby they swing their rear legs and feet about in attempts to attract a mate when the usual frog call is not heard by the females. 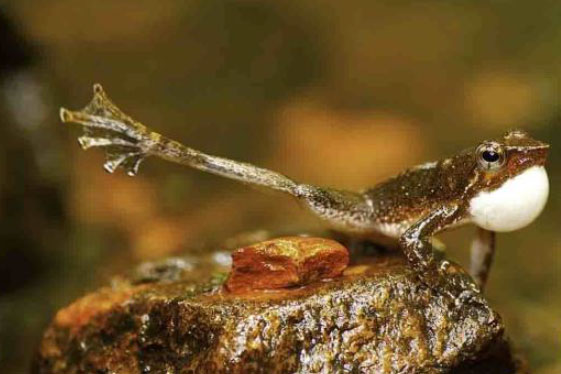 In addition to attracting a mate, the foot flagging is also used as an offensive maneuver to kick away potential competitors, which according to the paper is important due to the fact that the ratio of male to females is 100:1. The frogs are apparently in danger because the streams in which they breed during the monsoon season are becoming dry. 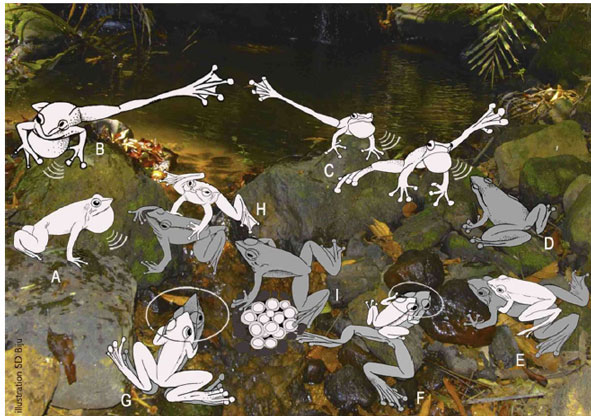 Schematic illustration of breeding behaviour in Micrixalus: A. male calling and foot tapping, B. male foot flagging with simultaneous calling, C. male kicking another intruding male, D. female approaching a calling male, E. male and female in amplexus, moving inside the water, F. amplected pair with their heads emerging out of water, and female digging a cavity on the stream bed with the help of hindlimbs, G. female releasing eggs inside the cavity, H. male detaching from the female, I. female covering the eggs with sand and gravel using hindlimbs. In the illustration, male is shown in light grey, and female in dark grey.

Want to learn more about the biodiversity of the Western Ghats?

9 Species Of Frogs Discovered In India

"They are very colorful, though they are very small, Das Biju said in an interview posted to Youtube. "At the same time they are endangered. Approximately 80 percent of the dancing frogs are living outside the protected area. That means indirectly there is no immediate protection for that habitat and their life."

The scientists have been detailing each of the 14 new species over the last 12 years and found that the frogs are apparently in danger of disappearing because the streams in which they rely on for breeding during the monsoon season are becoming dry due to environmental effects.