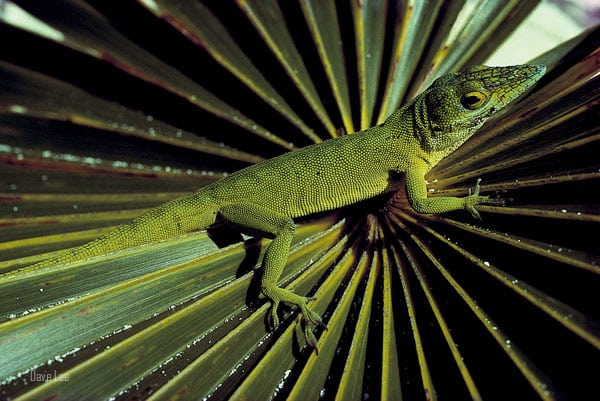 Reptiles And Amphibians Of The Bahamas

What to see and expect on your next archipelago adventure.

Thirty-three major islands, 670 smaller islands, and about 2,400 named cays, inlets and rocks make up the Bahamian archipelago. This West Indian country’s islands and cays are grouped on 14 banks made of carbonate rock, and the islands are low lying. At about 210 feet above sea level, Cat Island is the highest. The archipelago is home to 57 native species of terrestrial reptiles and amphibians, and four species of marine turtles.

Travel to and from the Bahamas is simple and affordable. Currency is the U.S. dollar, it’s an English-speaking country, and its infrastructure for tourism and interisland travel (at least on the larger islands) is dependable. Because of this combination of factors, the Bahamas are a good choice for a vacation that could include seeing a number of interesting species not found on the North American mainland.

One year I took my wife to Cat Island for her birthday. She was excited about the trip even though she quickly learned my real goal was to catch and photograph endemic turtles.

Bahamian herpetofauna, which includes a number of endemic species and many others not found outside the Bahamas or Greater Antilles, is reasonably intact. Most islands still support their original fauna, and few species have gone extinct. Several of these endemic species are large, spectacular reptiles, such as boas and rock iguanas. Many small species of lizards are diurnal and easily observed. In addition, clear, shallow water permits easy observation of marine turtles, and several species are on exhibit in public aquaria and other tourist destinations. Because of the large number of islands, many seldom visited, it is always possible to discover new island records of native species.

Snakes of the Bahamas

Bahamian snakes are an interesting group, and all are endemic. Most species are nocturnal or fossorial, so they are not likely to be encountered during a casual visit. A number of them are restricted to specific islands well-removed from the main tourist areas. 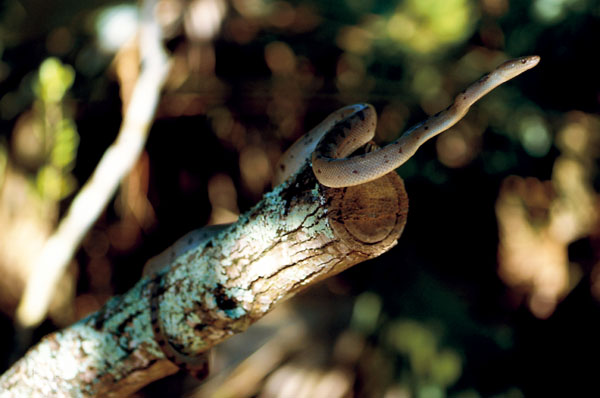 The brown racer (Alsophis vudii picticeps) is the exception. It is a diurnal endemic found on all islands except San Salvador and Mayaguana. These snakes are frequently seen crossing roads and moving through sparsely vegetated fields. Considerable variation in markings and coloration exists between the different islands, and at least five subspecies occur in the Bahamas.

In contrast are the uniformly drab blind and worm snakes (genera Leptotyphlops and Typhlops), which are almost never encountered above ground.

The diversity of boas is amazing. Three endemic species represent the genus Epicrates. Wide-ranging and found throughout the Great Bahama Bank, Bahama boas (E. striatus) are represented by five subspecies. These snakes specialize in catching bats, and they are often found in and around cave entrances after dark. They lie in wait in narrow passages and ambush flying bats. Rural residents call them “chicken snakes” because these boas are often caught raiding poultry houses after dark.

The smaller Abaco Island boa (E. exsul) is confined to the Little Bahama Bank (Abaco and Grand Bahama islands), and the southern Bahama boa (E. chrysogaster) is found from Crooked Island south to the Caicos Bank. Other Epicrates species occur in the Greater Antilles, and several get quite large.

Pygmy boas (Tropidophis spp.) are small ground-dwelling snakes seldom seen in the open, but a single endemic species, T. canus, is found on many of the islands.

Lizards of the Bahamas 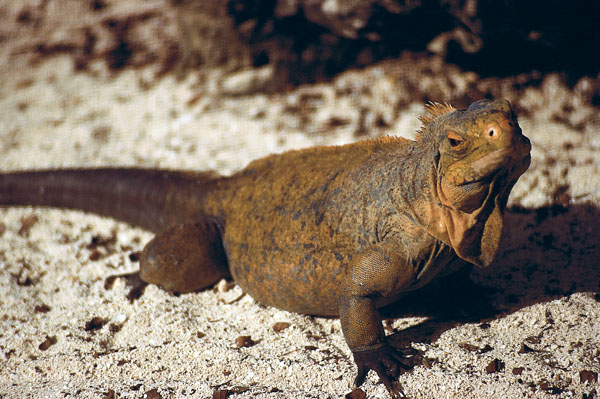 Seven rock iguana species of the genus Cyclura occur in the Bahamas.

In times past, these large lizards lived on most islands in the archipelago, but pre-Columbian man and European settlers hunted and eliminated them from all but one of the main islands. On many of the smaller islands they were lost to predation and through competition from introduced animals.

Excluding some remote sections of Andros, the largest island of the Bahamas, these iguanas currently are restricted to small, uninhabited rocks and cays. Several islands supporting these lizards are destinations for local tour boats.

Smaller lizards abound on the islands, and a number of native lizards have adapted to rock walls and landscaping plants in towns and villages. Anoles are the most conspicuous, but it’s possible that reptile enthusiasts will find the curly tailed lizards and various geckos the most interesting. In addition, blue-tailed lizards (Amiva spp.), with 15 named subspecies, are well-represented. Nearly every island in the Bahamas supports an endemic race. 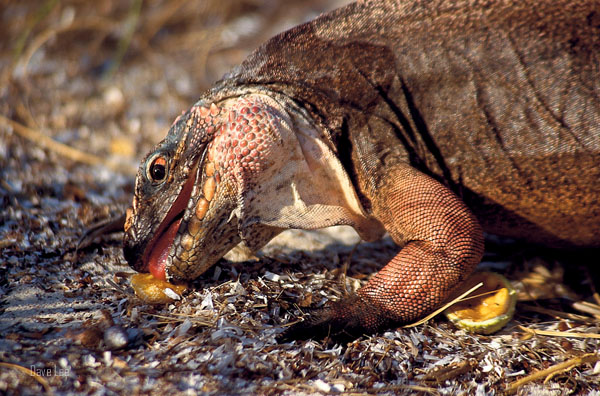 Crocodilians don’t currently exist in the Bahamas, but they might have in the past. Isolated reports date back to 1731 and 1886. A number of fossil and subfossil records also exist, but due to poor preservation, the earlier ones could not be identified to the species level.

It was assumed these reports represented stray American crocodiles, and perhaps this is true based on the fact that the reptiles are known to be strong oceanic swimmers.

Recently paleontologists have discovered relatively complete fossil skulls and other material that show the Cuban crocodile (Crocodylus rhombifer) once inhabited the northern islands of the Bahamas. This material dates back about 2,800 years, approximately to the period when pre-Columbian man first arrived in the region.

Turtles of the Bahamas

Four of the five species of marine turtles known to occur in the Atlantic also occur in the waters of the Bahamian banks. Green sea turtles (Chelonia mydas), loggerheads (Caretta caretta) and hawksbills (Eretmochelys imbricata) commonly occur in the region, and small numbers of each species nest seasonally on some of the less inhabited islands. They forage in the shallow waters of the banks, in bays and in tidal creeks. Young and juvenile turtles are common, which suggests the waters surrounding these islands are important to these species. 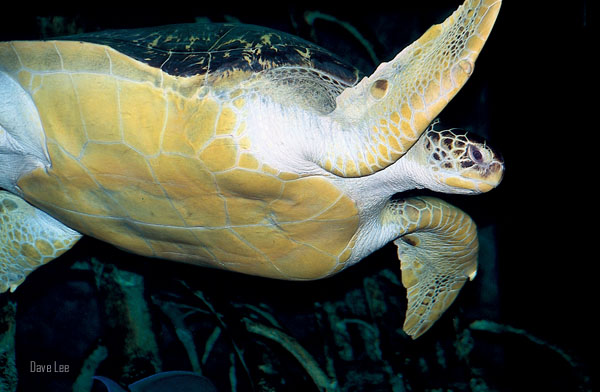 Leatherback turtles (Dermochelys coriacea) are reported to occur occasionally in offshore waters, and one known nesting occurrence is on the Abaco Islands.

Besides marine turtles, two taxa of freshwater turtles occur in the Bahamas: the Cat Island turtle (Trachemys terrapen) and the Inagua slider (Trachemys stejnegeri malonei). For decades the Cat Island turtle was thought to be endemic to a single island, but it has subsequently been discovered on a number of northern Bahamian islands. The Inagua slider represents an endemic subspecies confined to Great Inagua. Related subspecies occur in Puerto Rico and Hispaniola. Both of these Bahamian turtles are confined to areas that can be measured in acres, and their populations are very vulnerable.

Amphibians of the Bahamas

The diversity of Bahamian amphibians is modest due to the semiarid nature of many of the island groups, a number of coastal plant communities regularly impacted by seawater and the complete lack of available fresh water on many islands.

No salamanders occur in the Bahamas. Native amphibians are limited to two frog species: the Cuban treefrog (Osteopilus septentrionalis) and the greenhouse frog (Eleutherodactylus planirostris). Wide ranging in the Antilles, both were introduced into Florida in the early 1900s.

Diversity of the Bahamas

The zoogeography of Bahamian herpetofauna is both interesting and complex. Native species and subspecies are not distributed willy-nilly; species assemblages of the different banks of islands have distinct affiliations with different neighboring West Indian islands.

In general, the northern islands’ herpetofauna is affiliated with Cuba’s, and the southern islands’ herps are affiliated with Hispaniola. No native terrestrial species are shared with Florida or other southeastern states. Each Bahamian bank and a number of larger islands support endemic species and subspecies. For such a limited land area the country exhibits outstanding diversity and endemism. 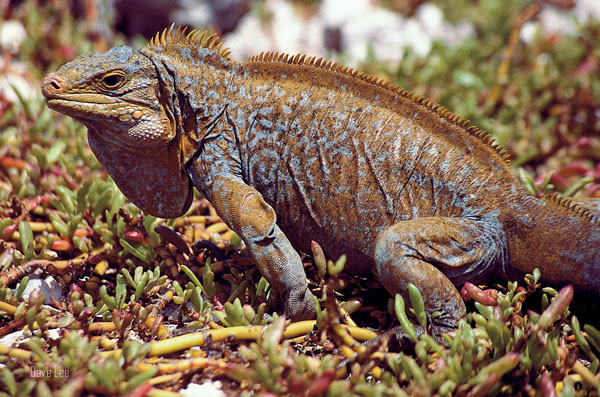 The San Salvador iguana (Cyclura rileyi rileyi) is an endangered species. Declining habitat and feral animal predation are among the causes.

The Bahamian archipelago straddles the Tropic of Cancer in the western Atlantic Ocean. Both subtropical and tropical regions are represented. The island group is actually composed of two separate countries: the Bahamas, and the Turks and Caicos Islands (a British dependent territory).

Despite the close proximity of the northernmost islands of the Bahamas to South Florida (55 miles), native fauna is of Greater Antillean origin. This implies species groups originally from the West Indies found their way to the Bahamas. This is true not just for reptiles and amphibians, but also for freshwater fish, breeding birds and mammals (mostly bats).

English is the national language in the Bahamas. Travel costs are only slightly higher than similar travel in the United States. American dollars are used everywhere. Credit cards are accepted on most of the “out islands,”a local term refering to the lesser populated and lesser visited islands, but carry cash and check ahead to make sure the smaller restaurants, hotels and car rental agencies accept credit cards. Remember, you will be on islands, and flight schedules are limited, so bad weather and other factors may extend your stay.

A number of commercial airlines service the Bahamas. The two main destinations are Nassau on New Providence Island and Freeport on Grand Bahama Island, but a number of other islands are directly accessible by air from U.S. airports. On some of the less frequently visited islands, accommodations and car rentals are limited, and reservations should be considered a necessity. 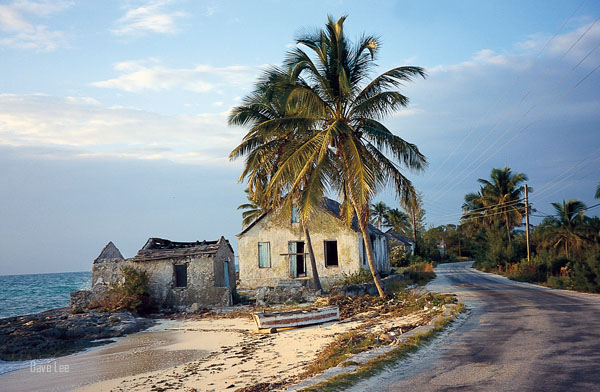 It is unlikely to spot nesting marine turtles here. They prefer the shores of remote Bahamian beaches.

A number of travel agents specialize in travel to the Bahamas. Even on some of the most remote islands tourists can directly book reservations for rooms and rental cars online.

The Bahamas are so close to Florida it would be wise to explore the area on a series of trips, perhaps focusing on one major island and one remote one per visit. Charter flights and boats are available, but these greatly increase traveling cost and reduce travel schedule flexibility.

Do not expect tourist industry staffs to be familiar with wildlife. Ecotourism is relatively new in the Bahamas, and it makes up a rather small portion of the total industry. Local people have different names for most species of wildlife, and these names vary from island to island. For the most part you are on your own.

Like in other subtropical countries, many species (particularly lizards) can be found in towns and among vegetation planted around hotels and other establishments. Boat tours from Nassau to islands supporting populations of tame rock iguanas are available, and nesting marine turtles can be found in season on many of the more remote beaches.

Do your homework before you arrive, so you know what to expect on each island. There are a number of distinct banks of islands in the Bahamas, and each has its own endemic fauna. Do not remove reptiles or other wildlife from the country; enjoy the various species in their native habitat.