I  treaded lightly around blooming creosote bushes, swaying in a dry desert breeze. A desert tortoise lumbered toward its burrow and a desert horned lizard tried avoiding detection, its markings blending perfectly into the desert landscape. I took one step further and froze, slowly kneeling down for a nose-to-nose encounter with a male long-nosed leopard lizard (Gambelia wislizenii). 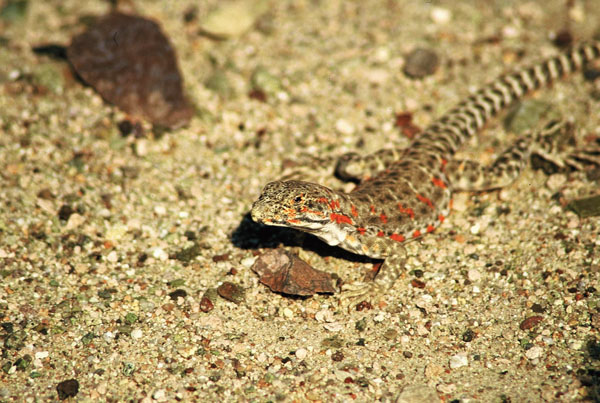 A female long-nosed leopard lizard displays mating colors. Unlike other lizards, the females are larger than their male counterparts.

The Desert Tortoise Natural Area not only protects the endangered tortoise, but also a bevy of other reptiles in California’s Mojave Desert. In fact, it’s one of the best places to observe the long-nosed leopard lizard. The creosote bush threw off long shadows, and the leopard lizard waited at the edge of a spindly shadow for unwary prey such as a beetle, grasshopper or even other lizards. Statuelike, this cunning desert predator didn’t move a scaly muscle. That was, until it spotted an apparent prey item beneath a creosote bush 10 feet away. Without hesitation, the slender, agile lizard darted to the creosote, gobbled its prey and then disappeared, as if swallowed whole by the Mojave.

After a 10-minute drive north of the natural area at Red Rock Canyon State Park, I was scouring red, orange and pink buttes for more herps. A desert spiny lizard performed push-ups, and chuckwallas basked in the sun. Once again, I nearly stumbled upon a long-nosed leopard lizard, this time a female. There was no mistaking its feminine side. In May and June, females exhibit a spattering of red-orange spots to go along with their white crossbars and other spots. Typically, the orange spots cover the underside of the tail, the lizard’s sides and neck, but this one displayed orange breeding coloration on its head and snout, as well. 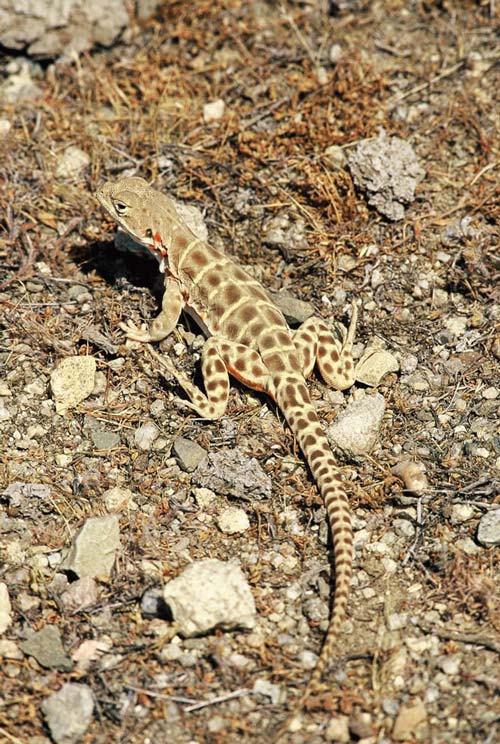 When born, blunt-nosed leopard lizards, like this female, begin their lives with stripes, but as they grow, those stripes morph into spots, earning their leopard name.

Avoiding grassy areas and dense brush that might’ve impeded with her tremendous agility, this female wasn’t nearly as calm as the male I encountered earlier in the day. Enjoying the open spaces of the Mojave, she scampered across the hard pan of the wash, leaving a trail of loose gravel in her wake. She darted between burrows and among creosote before vanishing into a dry arroyo.

From snout to the tip of the tail, the long-nosed leopard lizard can reach 16 inches in length. Unlike other lizards, the females are larger. Known as reversed sexual dimorphism, this significant size differential is rare among iguanid lizards.

Gambelia wislizenii enjoys a huge range in the western United States. Specimens can be found from sea level to 6,000 feet from southeastern Oregon, east to Idaho, and throughout the southwest in Nevada, Utah, Arizona, Colorado and western Texas. It also thrives in eastern California down to the tip of Baja California and western Mexico.

It is an efficient predator, and individuals have been known to leap as high as 2 feet off the ground to snag flying insects. Occasionally, they’ll supplement their diet with soft leaves, blossoms and berries. Water is gleaned from the moisture of their food sources. Small rodents and other lizards round out the long-nosed leopard lizard’s omnivorous diet.

I once read about a female long-nosed leopard lizard that was observed choking down an iguana (presumably a desert iguana) that was more than three-quarters its own size. It took three hours for the leopard lizard to swallow the other lizard! 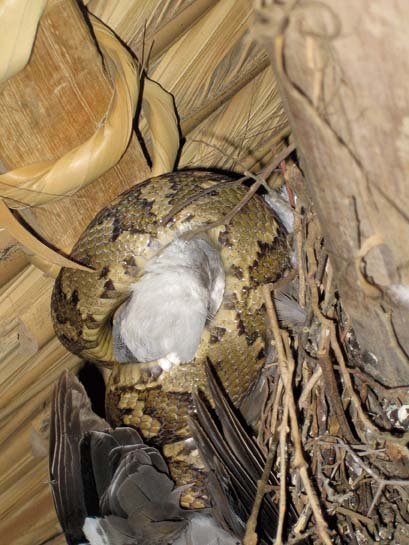 As the author was observing a female blunt-nosed leopard lizard that was displaying orange breeding coloration (right), the male on the left showed up. As you can see, she was not receptive to his advances.

To Be Perfectly Blunt

“Out on the Elkhorn Plain,” she replied.

Located at the base of the Temblor Mountains and the potentially rumbling geological wonder that is the San Andreas Fault, the Elkhorn Plain on the eastern fringe of the monument is gravelly, sparsely vegetated and desolate, to say the least. Yet, it’s ideal habitat for the endangered blunt-nosed leopard lizard (G. silus).

During mid May, the area is a hot, inhospitable place. I was driving over a maze of dirt roads and not having any luck locating any bluntnoses in the 90-degree heat. I kept remembering what Hurl had told me:

“You have to be patient and look closely,” she said.

With my binoculars, I scanned every rock, animal burrow and exposed precipice. Still, nothing stirred. Then, with my truck creeping slowly along a sandy road, I pulled up on a baby bird that was standing in my path. It wouldn’t budge, so I got out of the truck to move it, and immediatey felt as if something was watching me.

Sure enough, there it was, six feet away: a female blunt-nosed leopard lizard, bright-orange breeding coloration prominent, was staring back at me.

I low-crawled to a nearby thorny alkali plant for some cover to observe the lizard, which remained motionless. Perhaps it was waiting out the mid-day heat, or for an unsuspecting grasshopper to feast upon. It never did go for the baby bird.

Less than 30 seconds later, a larger, aggressive male charged in to confront the female. Instead of submitting to the male, the female postured on all fours and puffed herself up, mouth gaping. The male bluntnose immediately backed off, lapped up a few insects, and took off again into a saltbush.

From Stripes to Spots

When they’re born, blunt-nosed leopard lizards are striped, not spotted. But as they grow, the stripes morph into spots, which earns the lizard its common name. Adults are active from March to August, although the males usually end their activity in July. Females give birth in July and August, and young are active into September and October.

Beetles, grasshoppers, moths and crickets comprise the majority of food items. Smaller lizards, including their own species, are also relished.

The coloration of blunt-nosed leopard lizards depends on the color of their habitat. Typically, the Carrizo Plain landscape is yellowish brown in the spring and summer depending on rain. The lizard’s color is similar, with spots and stripes more pronounced against the lighter-colored skin.

Male blunt-nosed leopard lizards are highly combative when establishing and maintaining their territories, which range from 0.52 to 4.2 acres. That’s a lot of ground to cover, especially when a male has to corral several females within his territory while fighting potential rivals.

This may explain the aggressive behavior of the male I observed when he initially approached the female; it may have been a 3-acre charge for him to see if that female was still his. After it was determined the female wasn’t to be intruded upon, the male backed off, leaving the female unencumbered to explore mammal burrows and to hunt on her own.

I did likewise, and headed back to my truck to leave behind that male’s territory to explore more of the Carrizo Plain.REPTILES

The 250,000-acre Carrizo Plain was deemed a national monument by former President Bill Clinton in January 2001. Thirteen threatened and endangered species are found in the refuge, including the San Joaquin kit fox, giant kangaroo rat and antelope ground squirrel. It also provides critical habitat for the endangered California condor. A quarter of the state’s sandhill crane population overwinters in 3,000-acre Soda Lake, one of the largest undisturbed alkaline wetlands in the state.

Chuck Graham is a freelance writer and photographer in Carpinteria, Calif. Leopard lizards are his favorite reptiles.