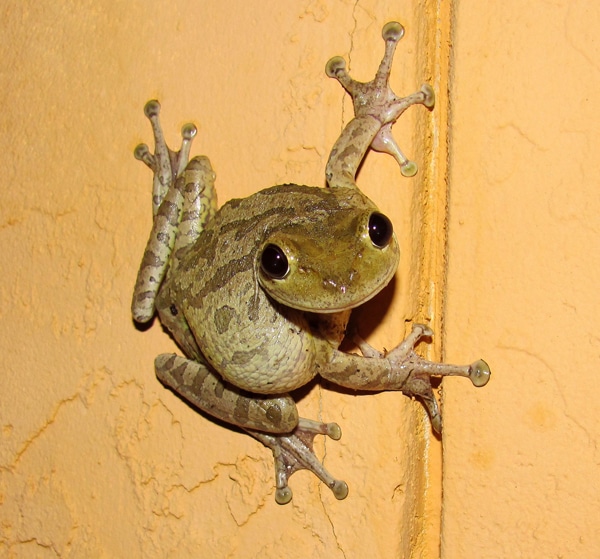 The Cuban Treefrog (Hyla septentrionalis) is a large and invasive species of treefrog that was introduced and is spreading in range, with its only lim

The Cuban Treefrog (Hyla septentrionalis) is a large and invasive species of treefrog that was introduced and is spreading in range, with its only limitation being freezing weather.  It grows to an impressive size and even eats local species of frogs. It is so invasive that many people set out to destroy it. In this article we'll take a closer look at this extraordinary amphibian.

Especially along the coast of South Florida, the Cuban treefrog are in great abundance and dwell freely among the human population there. They may even prefer man-made breeding sites over those occurring naturally. This species produces tadpoles that are quite small and are instantly eaten by guppies and mosquitofish. To avoid this the frogs prefer such places as rain-filled ditches, abandoned swimming pools, old boats and other objects that hold water, and just about any other source of water that doesn't contain fish. The onset of heavy rains is often their cue, and the breeding sites are quickly overcome by the roar of their croaking. 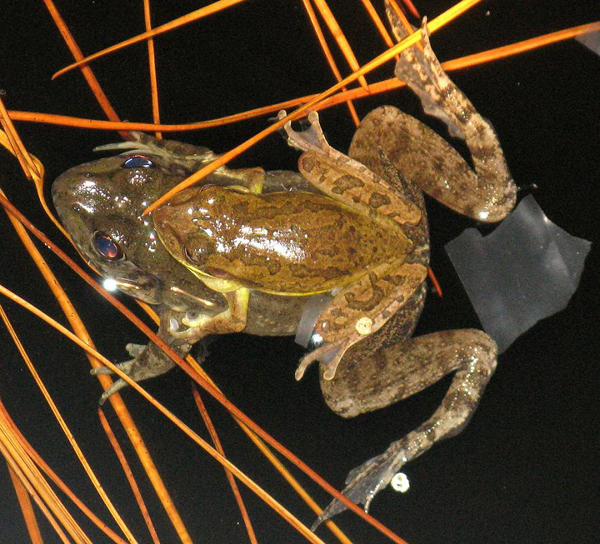 During a breeding frenzy this was seen pairing with a Rana heckscheri.

Cuban treefrogs aren't particularly loud, but in great numbers they can raise quite a volume! Also the carrying power of their call doesn't travel nearly as far as many of our native species such as the spring peeper (Hyla crucifer sp.) and the barking treefrog (H. gratiosa), which can easily be heard a mile or more on a calm night. The call itself can be easily confused with that of the leopard frog (Rana utricularia). 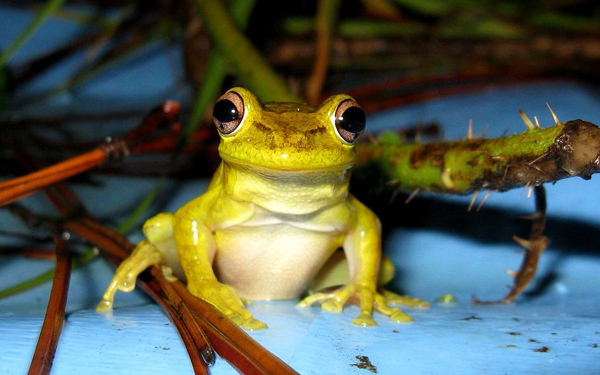 This one was seen on a piece of plastic on the ground.

When you look at Florida as a whole, the middle of the state is often hit by hard freezes during most winters while the coastal areas are usually spared at least the worst of it. Since this species is sensitive to the cold, it's obvious the population favors the coast. I have herped for them in St. Augustine on a regular basis and they seem to fluctuate here in population from year to year. In 2009 for example nearly every back yard had them, and these giant treefrogs could be seen around porch lights and windows all around town, but the winter was a harsh one and seemingly all but a few froze to death. Unlike our native species that know to take cover under fallen leaf litter on the ground or some other debris, the Cuban will sit peacefully on a tree branch and allow the icy winds to literally freeze it solid. During severe winters all but a few are frozen, and it's those few survivors that live to keep the population going. Those which take shelter in a garage, shed, sewer, a piece of pipe laying on the ground – or in any other place that escapes a bitter cold snap will help carry on the population, and from personal experience it takes about four years with no severe freezes to build up a healthy population again.

Besides them eating the local species, I think they're kind of fun to have around. I know in certain areas there are always too many of them, and sadly this may be the only species of frog some folks may ever see, but in the fringe areas such as Duval, St. Johns, and Flagler counties for example, they will reach near-epidemic highs for a year or two, and are not seen (or heard) at all after a hard winter, and one example after a huge abundance of them in 2009, by 2011 I was hard pressed to find even one – even after a lot of searching for them. 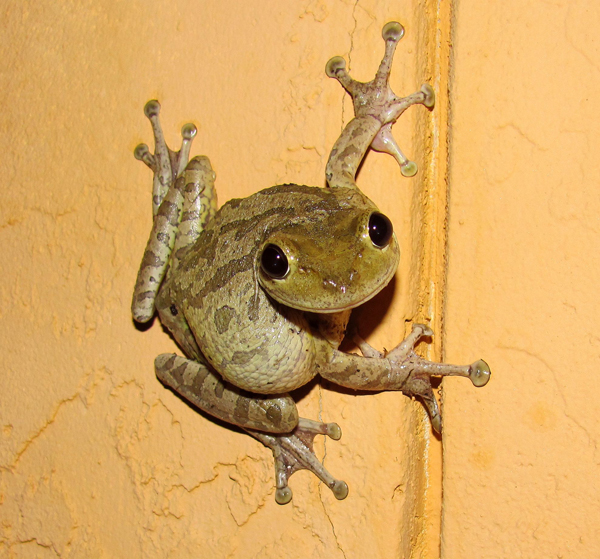 In Florida, the Cuban treefrog seems to prefer buildings rather than trees.

When they are abundant, any night will reveal them. In Florida, they seem to prefer buildings over trees, and will hide (often together) under shingles and metal or wooden siding of buildings in any little gaps they may find. They will remain there until nightfall and emerge just as darkness falls and forage through the trees, while others take to the ground. Others will head to the nearest window to feed on insects or smaller frogs attracted to the light.

They can be seen on practically any object. I have seen them on everything from cacti to cars, and from lily pads to patios. By day they seek shelter away from the sun and wind. One of the unique places I used to see them was in a housing area that went bankrupt before the houses were built, and at every lot there was a large plastic PVC pipe sticking up a few feet above the ground to mark the property perhaps, and in the evening the frogs could be seen emerging from these. Since then however, this area was bought by another developer and is now a thriving neighborhood, and thus the "Timberwood" population is no more – except for the ones that survive by living on the new houses. 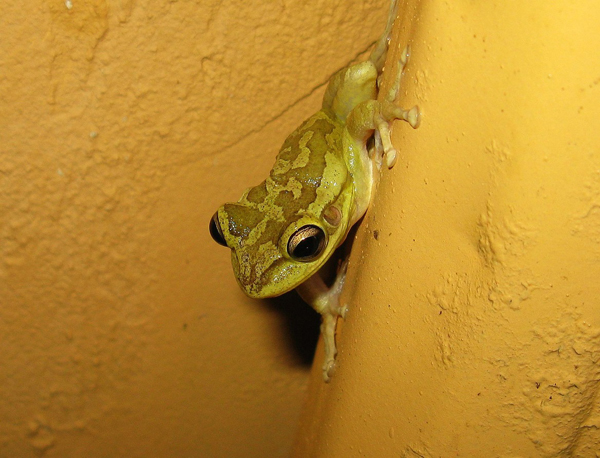 This Cuban treefrog is emerging from beneath the wooden siding of this building.

Wherever I go I am always on the lookout for the Cuban, and if you want a frog to keep as a pet is is among the best! During times of heavy warm rains (such as a tropical storm) things get REALLY interesting. Cuban treefrogs come out and can be seen almost everywhere as they make a mass exodus to their breeding areas. They will congregate there in great numbers, and seem to present no problem for the native species which share these areas as well and breed right alongside them. The eggs seem to stick to whatever they're laid next to and they hatch in a few days. The tadpole cycle is rather short for such a large frog, and the young emerge and often serve as food for the parents! Also most tadpoles will die because the temporary rain-filled pools in which they breed dry up long before they have a chance to emerge, and provide food for herons, egrets, and crows, as the remaining tadpoles cluster together in the inch-deep water as things dry up under the hot sun. The adults have few natural enemies because of the strong-tasting skin secretions. 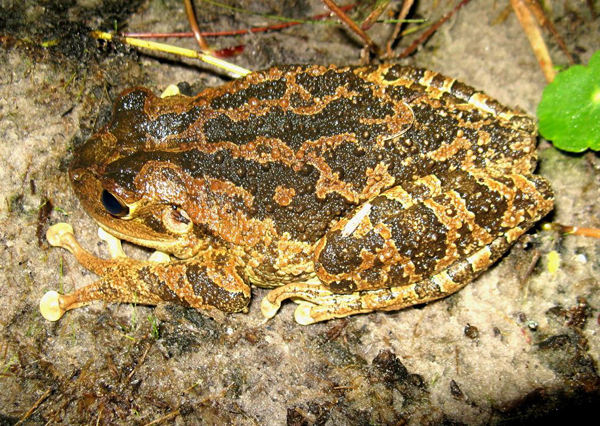 The best place to find and capture a Cuban treefrog is to look for them on the stems of the Sabal Palmetto (or other palms), and young trees with leaves close to the ground and within reach. Sometimes they can be seen in the frond itself. I share this because they make good captives, and if you live within their range they're free and easy to get. Also looking under slabs of bark still attached to a dead tree may reveal a number of them, and it's up to you to pick and choose the one(s) you want before they all scatter. 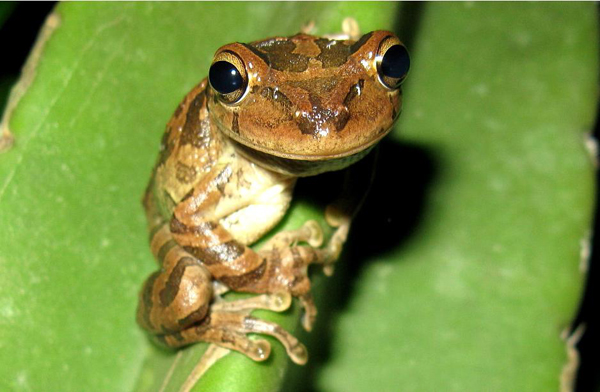 This Cuban treefrog was seen atop a tall cactus plant.

Again these frogs are not liked by many, and are rather despised by some, but I find them to be fascinating in many ways as they prowl the night, and their wanderings will lead them into all sorts of places where few other frogs will go, and some folks have even reported them in such places as their bathroom. If you live within their range, you may never know where one of these fascinating frogs may pop up next, such as inside your car, or emerging from the soil of a potted poinsettia during your next Christmas party!

"Nature" Joe (Myers) is a nature photographer and has many years of experience with frogs and field herping. He has been working with groups of people of all ages in an outdoor educational setting since 1986 and can be followed on Facebook https://www.facebook.com/n.joe.myers  where his nature photography and time-lapse videos are displayed there publicly.