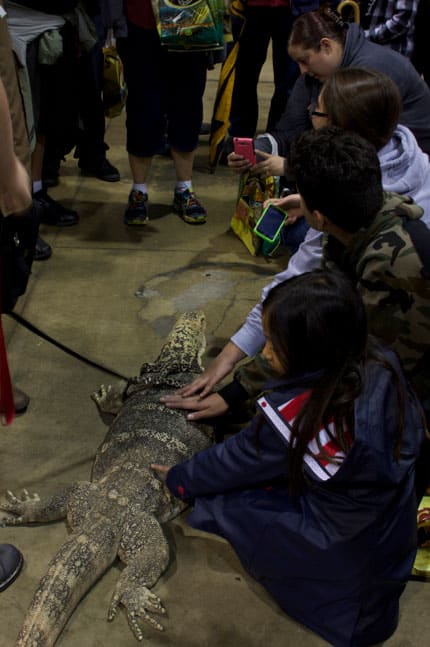 Rain and Reptiles at the 2015 Pomona Reptile Super Show

The 2015 Reptile Super Show in Pomona went on in spite of the rain. Actually, I think the rain helped because later in the day the floor was fairly bu

IBD – The Twisted Tale of Inclusion Body Disease
Australians Develop Roadmap To Stop Decline Of Its Reptiles
Video: These Snake Catchers In Singapore Get It Done Like A Boss

The 2015 Reptile Super Show in Pomona went on in spite of the rain. Actually, I think the rain helped because later in the day the floor was fairly busy with people. I went to the show on Sunday, driving the 37 miles in the pouring rain to get a glimpse of what the show had to offer. This shows and others like it are great places to get information about your favorite animals, meet some of the best breeders in the business, and find amazing deals. You can always make a great deal at these shows. I brought along my daughter who is always game to go to reptile shows. She even went to the San Diego Super Show two summers ago and helped REPTILES magazine editor Russ Case with reptiles for a photo shoot. At this show, we weren’t going to be buying a whole lot, except for some mealworms to feed her lizards, and some frozen rat pups for her snakes.

We arrived at the show right around noon, took the tram from the parking lot to the show entrance, paid our entrance fee and headed on in. My daughter really enjoys the show and was, as always, fascinated with all the reptiles that the vendors were showing off. I wanted to check out some cool reptiles. After booths of leopard geckos and ball pythons, I happened upon some cool stuff. Robert Bruce was showing off his captive bred indigo snakes, and they did cause a bit of a stir. Indigo snakes have got to be one of the coolest snake species out there. Their coloration, size, and demeanor just doesn’t seem to disappoint. 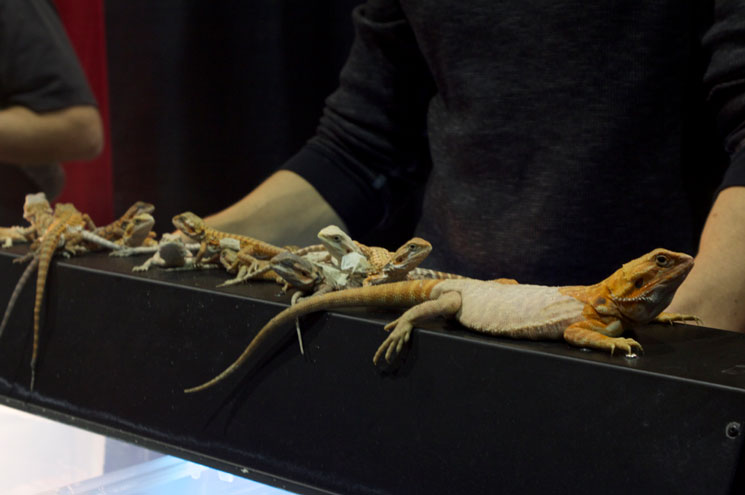 These beardies were just chillin.

After Bruce’s booth, we headed over to Prehistoric Pets, where the crew there were showing Mr. Kipling, the Asian water monitor who stars in the Disney TV show JESSIE. My daughter is a huge fan of the show and she started telling me all about Mr. Kipling, and how he was found by Ravi, the Indian boy on the show, in a swamp and how Ravi hatched him out. Well, the lizard is huge and created quite the crowd, until he pooped on the floor. That scattered the crowd real quick.

We left and headed over to Geckos, Etc. where a little hatcling snake caught my eye. The owner there, Steve Sykes was selling leopard geckos as well as western hognose snakes. Now I’ve always wanted a western hognose since I was a little kid, reading how they play dead and puff up and do anything to distract prey so they don’t get eaten. Well Mr. Sykes, being the cool guy he is, helped me choose one, we made the deal and I was on the search for an enclosure for the little hatchling. Steve is a cool guy and even got married at the NARBC show in Anaheim back in 2005. REPTILES magazine provided the wedding cake! 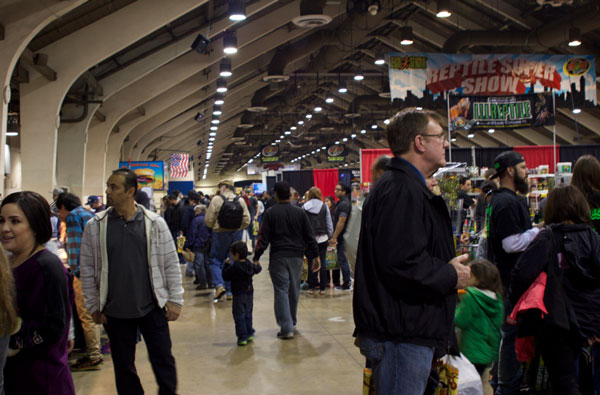 Decent crowds at the Reptile Super Show in Pomona, Calif.

In all, it was worth the drive to Pomona to see all the reptiles. Ton Jones was even there signing autographs on the latest issue of REPTILES magazine. I heard he signed a bunch of copies. It is also nice to go with my daughter, who likes to hit up all the local reptile shows in SoCal. 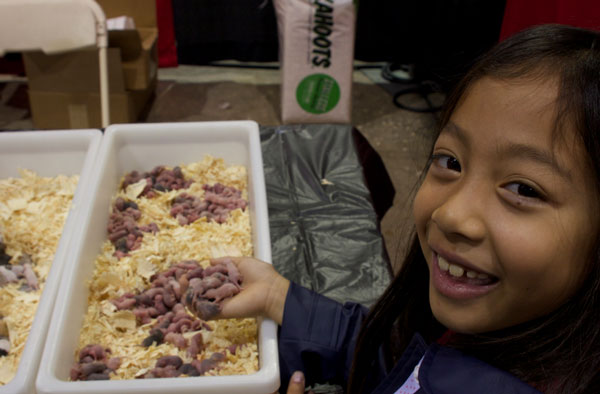 Juju with a handful of her favorite mice.