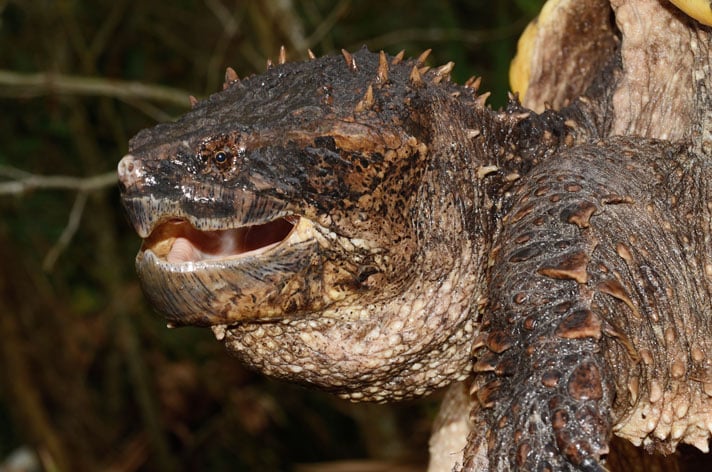 Herp Queries: How Powerful Is The Snapping Turtle Bite?

Common snapping turtles (Chelydra serpentina) quickly defend themselves out of water, but underwater, they are scaredy cats and opt to avoid confrontation if any avenue of escape exists.

Question: How strong is the bite of a snapping turtle, really? Can one bite a broomstick in half, as my friend’s father claims? Can they bite harder above or underwater? 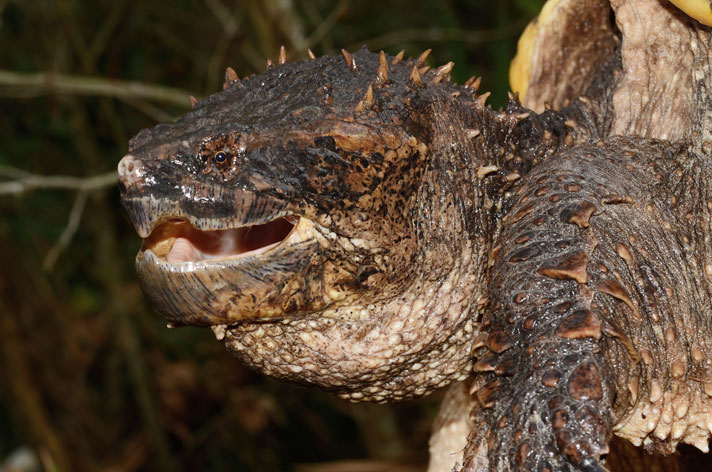 Common snapping turtles (Chelydra serpentina) quickly defend themselves out of water, but underwater, they are scaredy cats and opt to avoid confrontation if any avenue of escape exists.

Answer: Without a qualifier, like the size of the turtle in question, it’s impossible to give a meaningful answer. But one thing I can state, without knowing that: Even a huge specimen is not powerful enough to snap a broomstick with its jaws. Back in the olden days, that was the standard comparative measure used to impress and scare people. I’m surprised anyone is still using it.

When people are afraid, they like to cling to “facts” that reinforce those fears. They make for a better story, and using a common object in the example, like a broom handle, makes it even more memorable. No doubt, someone from yesteryear was poking a broom at a large snapper and managed to break the handle in the jostle. I think it’s highly improbable that it broke from the sheer exertion pressure of a bite, no matter how big the tormented animal was.

If that assertion has any basis in fact behind it, the broomstick must have been very thin, partially rotten or made of inferior kind of wood. Maybe brooms just weren’t as solidly built back then, but that also goes against trends in manufacturing. The rigid edges of an adult snapper’s jaws could certainly cause a deep gash, if not actually sever a finger, especially a small one. Can we suffice it to say they can bite, and hang on, with extreme tenacity, and to keep both broomsticks and fingers out of testing range of any size Chelydra serpentina’s jaws? Of course.

By the way, snapping turtles under water are not very prone to biting at all at something disturbing them, such as an errant foot. Out of their comfort zone, as when making a rare land crossing, they will readily lunge and bite for defense. But beneath the surface, swimming or running away on the bottom is what they virtually always prefer to do to elude an enemy or disturbance.