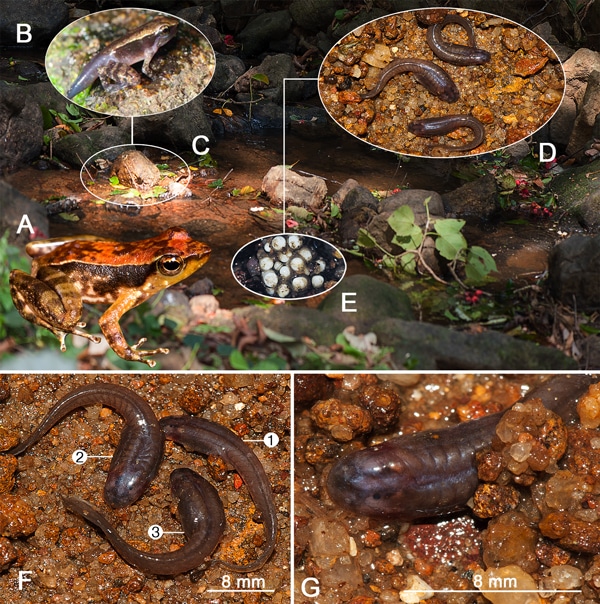 The Indian dancing frog (Micrixalus herrei), a frog that waves its legs when courting mates as well as in defense of its territory has been known to s

The Indian dancing frog (Micrixalus herrei), a frog that waves its legs when courting mates as well as in defense of its territory has been known to science for more than 125 years, but the behavior of its tadpoles have been a mystery because the little amphibians have remained elusive to the eyes of scientists until recently. 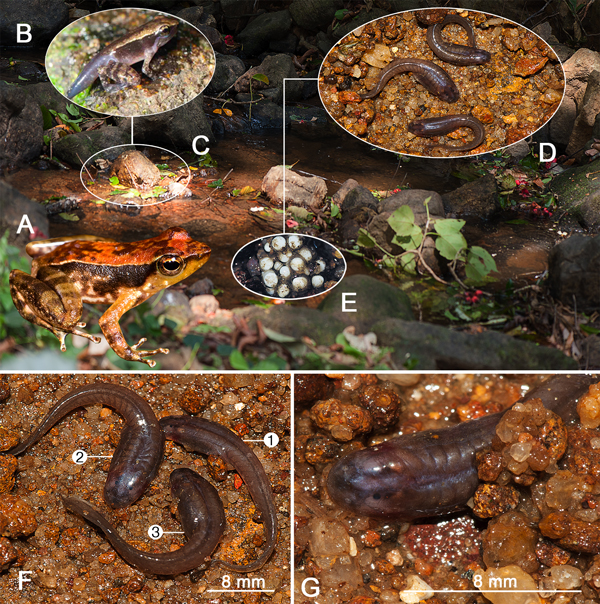 (A) Adult male (SVL 17.40 mm), found on the surface of emergent wet rocks along the stream; (B) metamorphosed larva, near shallow water, closer to the stream bank (SVL 17.20 mm); (C) stream margin habitat of metamorphs; (D) anguilliform bodied tadpoles on the gravel bed, after being exposed from depths of about 30 cm; (E) egg clutch buried under sand in shallow water; (F) fossorial tadpoles after being exposed, at stages 26 (1), 28 (2), and 29 (3), having eel-like, dorsoventrally flattened bodies, dorsal eyes, and well-developed muscular tails with reduced fins; (G) lateral profile of a tadpole, observed amongst exposed gravel (stage 27).

The tadpoles were recently found in the sand beds of a stream in the Western Ghats and are active burrowing tadpoles, which made them difficult to find, according to a research paper in the PLOS One Journal. The tadpoles, from eggs to late metamorphic stages, lead a completely fossorial life, meaning they spend their life stages up until they turn into frogs under the ground.

They maintain an eel-like appearance with a muscular body and tail, reduced tail fins, and eyes that maintain a skin covering, and serrated well-formed jaw sheaths that act like a sieve, keeping large grains of sand from entering their mouths.

This behavior of burrowing has kept the tadpoles from being discovered by science and the researchers, (Gayani Senevirathne, Sonali Garg, Ryan Kerney, Madhava Meegaskumbura , S. D. Biju) have shed light on the tadpole stage of an interesting species of frog.