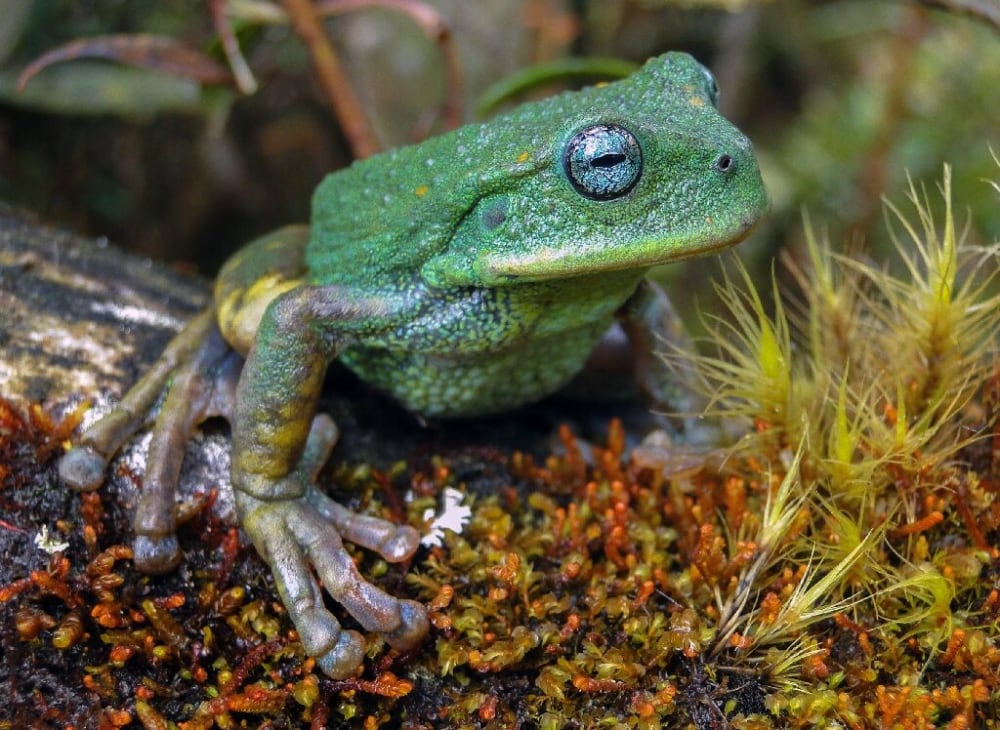 Researchers have discovered a new marsupial frog species in the Peruvian Amazon rainforest that is part of the Gastrotheca genus. The frog, Gastrothec

Researchers have discovered a new marsupial frog species in the Peruvian Amazon rainforest that is part of the Gastrotheca genus. The frog, Gastrotheca gemma, is green in coloration with a coarse, granular and patternless dorsal skin. Its irises are turquoise in coloration and sports a venter without blotches, flecks or dots. They frogs are so named marsupial frogs because females brood eggs in closed dorsal pouches, not unlike that of kangaroos and other marsupials.

Based on Based on Micro-CT scanning, the frog belongs to the Gastrotheca marsupiata species group. It is closely related to G. oresbios, G. psychrophila, G. spectabilis, and G. stictopleura.

“The herpetofauna of the isolated Cordillera de Colán deserves further investigation, in fact the expedition in which G. gemma was discovered is one of three expeditions targeting exclusively the unknown diversity of this group,” the researchers wrote in their paper describing Gastrotheca gemma.

The researchers also tested the subject frogs for the fungal pathogen Batrachochytrium dendrobatidis, which has wreaked havoc on amphibians across the world. They did not find any evidence of the chytrid fungus in this new species.

Horned Marsupial Frog Rediscovered In Ecuador After Missing Since 2005

“We surveyed frogs along existing trails and new open trails during five days, and captured frogs by hand. For each capture, we recorded coordinates and elevation with a GPS (Garmin, WGS84), and we swabbed the skin for detection of the fungal pathogen Batrachochytrium dendrobatidis. This procedure does not harm the frogs (Hyatt et al. 2007). Briefly, we gently stroked a sterile rayon-tipped swab (Medical Wire and Equipment MW113) across the skin a total of 30 times per frog: five strokes on each side of the abdominal midline, five strokes on the inner thighs of each hind leg, and five strokes on the foot webbing of each hind leg. We swabbed three specimens of the new species, and 59 specimens of eight species of syntopic frogs.”

The complete paper describing the new frog species, “A new species of marsupial frog (Anura; Gastrotheca) from the Cordillera de Colán in northeastern Peru” can be read on the Vertebrate Zoology website.