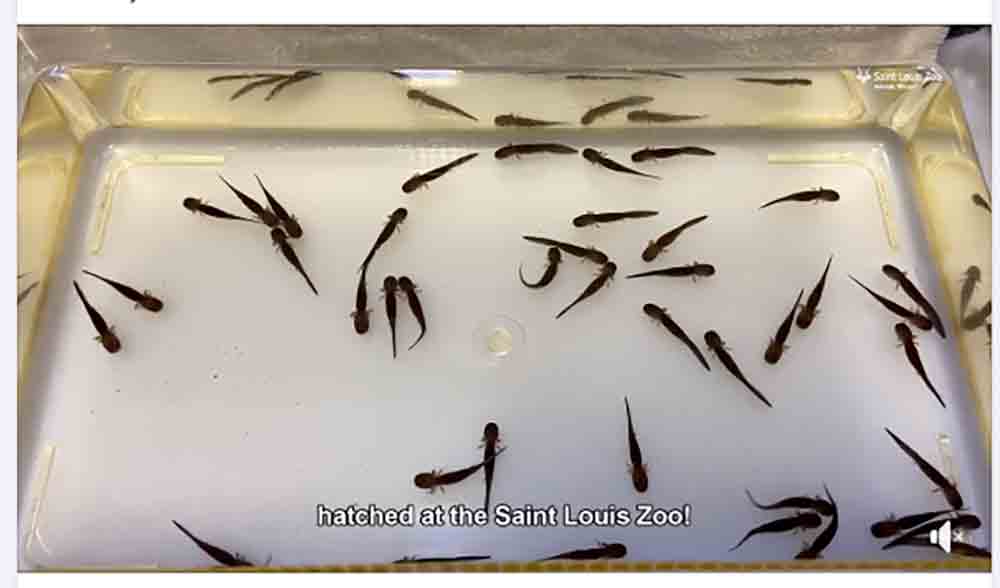 "Both (Ozark and eastern hellbenders) are listed as state endangered in Missouri, and the Ozark hellbender also is federally endangered by the USFWS. Screengrab via St. Louis Zoo Facebook page.

More than 1,000 Hellbenders Hatched This Fall At St. Louis Zoo

Hellbenders, also known as snot otters, are the largest amphibians in North America.

Of the 1,333 hatchlings, 583 came from eggs brought to the facility by the Missouri Department of Conservation.

Of the 1,333 hatchlings, 583 came from eggs brought to the facility by the Missouri Department of Conservation.

The St. Louis Zoo was the first institution to captive breed the hellbenders. In 2011, the St. Louis Zoo’s Ron Goellner Center for Hellbender Conservation, in collaboration with the Missouri Department of Conservation successfully hatched more than 62 offspring.

In July 2021, the U.S. Fish and Wildlife Service was sued for not listing the Eastern hellbender salamander as an endangered species.

Hellbender salamanders, also known as snot otters are fairly flat and their skin is folded and wrinkled. They breathe by absorbing oxygen through their skin, which is covered in mucus that is toxic to predators but not humans. The eastern hellbender grows to more than two feet in length and is found in streams in the eastern United States to Mississippi. They are fully aquatic salamanders and don’t leave the water.

They develop skin lesions when exposed to highly polluted waters. Nocturnal, the hellbender feeds on crayfish, dead fish, insects and other amphibians. They are prey to fish, turtles and snakes. They reach maturity in five to eight years and can live up to about 30 years. The Ozark hellbender salamander (Cryptobranchus alleganiensis) was listed as an endangered species by the USFWS in 2011. It is a subspecies of the Eastern hellbender salamander.