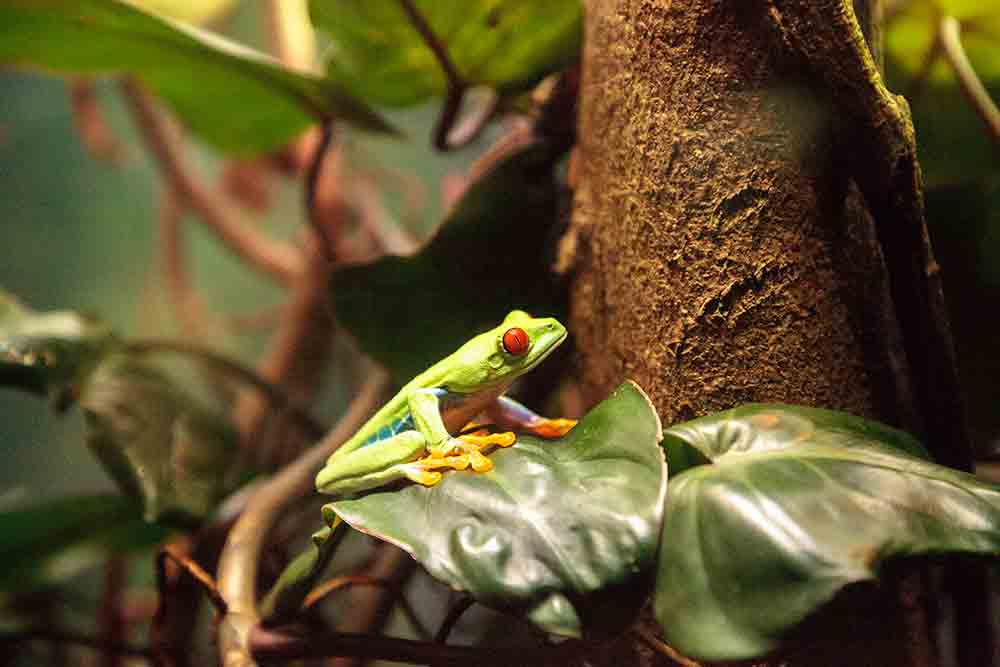 Amphibian enthusiasts who have cleared the first few hurdles of the hobby, who are comfortable with the ins and outs of general husbandry, are ready for the "next step."

Frustrated, I wracked my mind for a fresh idea. For weeks, I had been trying to breed a group of frogs without any signs of success. If I showered them in my rainchamber, the males would call, but infrequently. The females did not exhibit any interest in breeding at all.

I was working with frogs that breed in tree holes in the wild. I carefully followed the methods of one researcher who had successfully bred a different tree-hole specialists, but to no avail. He had used fish bowls, with a bit of water in their base, to simulate water-filled tree holes. The male frogs of the species I was breeding rarely approached the bowl. The females never entered it. Then it dawned on me: Perhaps a fish bowl was not concealed and private enough for this species. I needed something that would offer more hidden accommodations. A plastic shoebox! Yes, it would be confining and private.

I quickly cut a hole in the top of a shoe box that was large enough for a frog to use. I drilled holes in the sides 2 inches from the bottom, so the water depth couldn't get more than 2 inches and I wouldn't have to worry about the animals drowning. I carefully added the box to the rain chamber and added water to it. The top was blue, not transparent. The sides were opaque but not clear. In excitement, I turned the rainchamber's timer on and left, hoping for the best. The next morning revealed a pair of frogs in the box in amplexus. Just one day later, a clutch of eggs floated on the surface of the water.

Ah, sweet success! The addition of a slightly different microhabitat (artificial, at that) changed the entire scenario.

Amphibian enthusiasts who have cleared the first few hurdles of the hobby, who are comfortable with the ins and outs of general husbandry, are ready for the "next step." The next step amounts to the creation of ideal setups, which lead to healthy, long-lived animals and captive reproduction. Breeding success is a gratifying milestone for hobbyist, which is often remembered long after the last tadpole metamorphoses.

To get there, the conditions need to be more than just acceptable; they need to be ideal. One factor in creating the ideal setup is researching the species in question and supplying appropriate microhabitats, the hideouts animals utilize for reproduction and living space in the wild. For example, someone keeping poison-dart frogs for display can have the animals do well but never reproduce because they do not provide the proper microhabitats. Adding a few bromeliads (epiphytic plants), some leaf litter or a coconut half-shell will promote reproductive behavior. Coconut half-shells, with a petri dish beneath, work well in captivity as egg-deposition sites. The water filled axils of bromeliads and other small pools of water provide spots for the parent frogs to transport the tadpoles after they hatch.

As has been mentioned, bromeliads and coconut half-shells can be used in poison-dart frog enclosures. You should drill a hole in the side of the coconut shell for easy access by the frogs.

Elaborate creations aren't necessary. The Baltimore Aquarium accomplished its first captive reproduction of Dendrobates azureas using plastic soda bottles. The frogs simply preferred these sites for egg deposition. Seed pods, film canisters, flower pots, tiny fish bowls, glass jars … the limit lies with your imagination, and simple solutions can be as effective as complex creations. There are a number of microhylid frogs available on the market. These anurans are seldom bred successfully in captivity. One method for providing proper hideouts can be the use of PVC pipe segments. Placing an end-cap on a segment of PVC pipe and burying most of it, so that the open end protrudes from the substrate, provides a perfect retreat. The pipe can be easily cleaned out with a bottle brush under running water. You can also add a shallow, plastic dish, containing roughly an inch of water, to the vivarium to supply a pool for egg deposition. Plastic shoeboxes buried flush with the substrate provide amphibians with cleanable pools.

It is important to provide easy ways for the frogs to crawl into and out of these containers. With small species, never place more than an inch or so of water into the containers, to avoid drowning. These microhabitats, combined with humidity and temperature manipulations, can incite reproductive behavior. Bamboo pieces are another great tool for supplying microhabitats. You can use bamboo pieces in the same fashion as the buried PVC segments. If the node is left intact (the dividing segments along bamboo rods), bamboo chambers will usually hold water. They can be lacquered to last longer. You can supply your vivarium inhabitants with numerous small pools in this fashion.

Bamboo pieces can be cut lengthwise to create a naturalistic "half-pipe" and another spot for standing water. Giant bamboo can provide larger hideouts for larger species. Segments of giant bamboo, buried vertically so that the opening protrudes from the substrate an inch or two (and filled with water), serve as egg-deposition sites for some frogs. They are also good tadpole-deposition sites for poison-dart frogs. You can combine segments of giant bamboo in an overhanging series with a small submersible water pump to create cascading pools.

Cork bark siding can accomplish several things when added to a terrarium. First, if the cork bark is affixed so that pieces overlap, it will create nooks and crannies. This provides more living space because inhabitants can easily climb the bark. You can attach a slab of bark like a shelf, and you can put coconut halves and other egg-deposition sites on it. Second, moistening the bark every day helps maintain a constant humidity in a vivarium if you live in an area with low relative humidity. As a terrarium dries, presoaked bark will release its stored moisture into the air and keep humidity high. In addition, the naturalistic appearance of cork bark really adds to the overall look of a terrarium. It can accommodate plants, and you can shape it into planters or attach epiphytic plants directly to it.

Cork can be attached to glass or wood terrariums using silicone sealant. In wood vivariums, the cork also can be attached via screws. If screws are used, it is a good idea to place a dab of silicone sealant to the exposed heads of the screws to prevent rust. You can place cork bark on the ground to provide terrestrial hideouts.

Cork bark can be used to accommodate fully aquatic species that frequent riparian (waterside) habitats in the wild. Frogs like Pseudis paradoxus (paradox frogs), Ooeidozyga sp. (floating frogs) and Caudiverba caudiverba (Chilean widemouth frogs) are aquatic and will benefit from the addition of floating cork bark to their enclosure. They do well maintained in a fully aquatic setup, but feeding can be problematic; without a land section, terrestrial food items quickly drown. If pieces of cork bark are included, they provide a platform for live food to crawl about. Enough pieces should be added so that every corner has a segment yet there are still plenty of spots for the frogs to poke their heads through the surface. Crickets can be added to the "floating-feeders," and insects that jump into the water will be able to get out by climbing onto the bark. The frogs will not hesitate to lunge at crickets on the bark and feed. The addition of floating and bog plants adds to the artificial riparian habitat.

Supply hollow pieces of wood for species with a relevant natural history. When dealing with arboreal species that utilize microhabitats like tree holes, hollow logs can be cut in half and attached to the sides of terrariums to accommodate the frogs. Use a chain saw if a capable wood shop is not available in your area.

A glass viewing window, added to the wall behind the log, allows observation of behavior. You can use a jigsaw to cut the hole in the side of a wooden terrarium. Attach a piece of glass with hinges so you have access to the retreat. If the terrarium is glass, there will obviously not be a need to add a viewing window. The half log can be positioned against the glass wall without actual attachment so that the integrity of the glass is not compromised. Adding a container of water into the space behind the log segment will provide available water in the hideout as well as an egg-deposition site.

I have been able to successfully keep tropical species of hylid frogs like Anotheca spinosa, Nictymantis rugiceps and Phrynohyas resinifictrix with these methods. Hopefully these suggestions have sparked an idea or two for changes in the enclosures that house your animals. The addition of a microhabitat can make all the difference. Literature on advanced techniques for keeping and breeding amphibians is becoming more prevalent. Read as much as you can, and familiarize yourself with current advancements and ideas. Use them to enhance your own projects and take the next step.