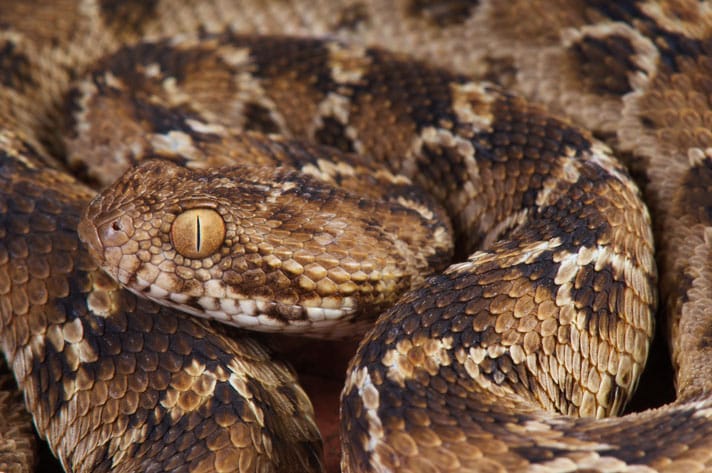 Saw scaled vipers are native to Asia, Africa and the Middle East. Photo by reptiles4all/Shutterstock

In October, a saw-scaled viper was apparently found in a container of bricks in Essex.

They are called saw-scaled because of their threat display in which they move their coils together in a sawing motion.

A saw-scaled viper (Echis spp.) survived a 4,000 mile trip from Pakistan to England, stowed away in a container of bricks. The diminutive deadly snake, which tops out around 2 feet in length, was found in Salford, a city in Manchester, England, by a forklift driver who was working at the Manchester Brick Specialist.

The forklift driver notified the company’s logistics manager, who called the RSPCA. When RSPCA Inspector Ryan King came out, he quickly realized that the reptile he was dealing with was not any ordinary reptile, but one of the most deadliest snakes in the world.

“Sometimes we get to jobs like this and it turns out to be a harmless grass snake,” King told the BBC. King said he was amazed the snake survived the trip, especially given the fact that it survived for so long in a cold climate.

“They are very small and it could have easily bitten someone and it seems he has been in the brickyard for about a month,”King told the BBC.
“Anti-venom is available in the countries where the viper originates from but the snake is so venomous – even then it does not always save the victim.”

“It is amazing that he survived a 4,000-mile journey and managed to live for weeks – and in such a cold climate – when arriving in England,” King said in statement released to the media. “It was quite an honour to deal with this snake and I am pleased he has a home where he will be looked after.”

Saw-scaled vipers are native to Asia, Africa and the Middle East. There are at least 10 subspecies of saw-scaled viper. They are called saw-scaled because of their threat display in which they move their coils together in a sawing motion. If the display does not ward off any potential predators, the snake will bite, and they are one of four species of snake in India that causes the most human deaths. They feed on birds, small rodents and lizards as well as invertebrates.