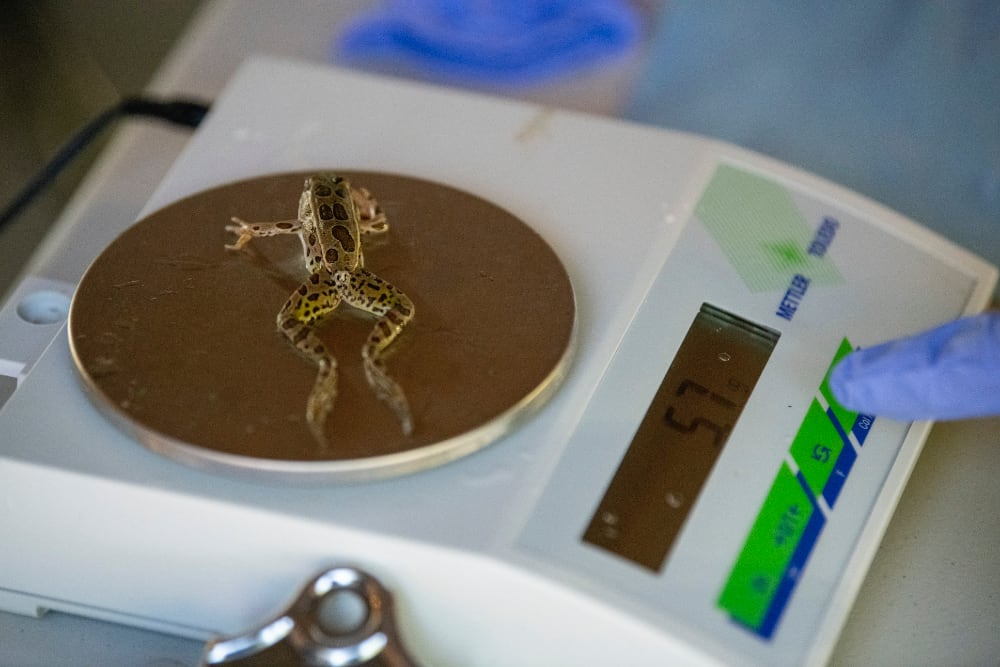 Hundreds of northern leopard frogs (Rana pipiens) were released back into the wild in Washington’s Columbia National Wildlife Refuge as part of an effort to bolster the wild populations from threats such as habitat loss and degradation, disease, the introduction of non-native species and climate change.

“The Washington state population of northern leopard frogs has a unique genetic variation relative to the rest of the species range, and they are part of the natural diversity of amphibians of the region,” Erica Crespi, WSU associate professor of biology said in a statement released to the media. “We are working to keep them here!”

Leopard frog eggs were collected by the Washington Department of Fish and Wildlife early this year and raised through the tadpole stage and into the frog stage at the Oregon Zoo and Northwest Trek Wildlife Park. They were deemed ready for release this week.

“Giving these frogs a headstart by raising them free of predators gives their whole population a better chance of survival,” Northwest Trek Zoological Curator Marc Heinzman said. “We’re very pleased to participate in this critical effort to save an endangered species here in Washington.”

“We’re at a critical point for this species,” Shelly Pettit of the Oregon Zoo said. “We’re doing everything we can to help northern leopard frogs thrive again in the Pacific Northwest — and a big, healthy froglet has a much better chance of surviving in the wild than an egg or a tadpole. After missing the 2020 season due to COVID impacts, we were very excited to produce a healthy group of frogs for this year’s release.”

The Northern Leopard Frog: From Egg To Frog

The northern leopard frog is found throughout much of the northern United States and into Canada. Its coloration varies from green to brown with spots that also vary widely. Leopard frog species are often kept as pets and were so popular at a time that you could mail away for the eggs and hatch them out yourself.