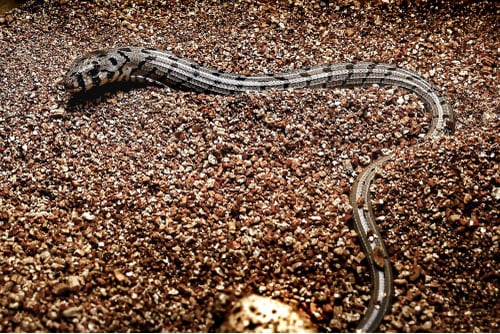 The Smithsonian’s National Zoo announced that its resident European glass lizard (Pseudopus apodus) pair, which were hatchlings themselves in 1996, we

The Smithsonian’s National Zoo announced that its resident European glass lizard (Pseudopus apodus) pair, which were hatchlings themselves in 1996, were successfully bred, and at 25 years old, hatched out glass lizard hatchlings of their own. The reptile is also known as the Sheltopusik.

Reptile Discovery Center keeper Robin Saunders has been working to get the duo to successfully mate, and coming out of brumation this year, she put the pair together in hopes of a successful mating.

“Our team observed them closely every day for any behavioral changes. They also checked the female’s neck for any bite marks—a sure sign of a breeding attempt,” Matt Evans, assistant curator of the Reptile Discovery Center wrote on the center’s website. “Once Robin saw the marks, she removed the male and gave the female some alone time. If she did not lay eggs, Robin brought the male back to try again.”

“During our rounds April 28, we saw that the female dug a nest in the soil and was wrapped around two soft and leathery eggs, guarding them. She picked a good spot—the male’s preferred hideaway, too—but she would not let him come near it. Male glass lizards do not play a role in incubating or raising the offspring, so the female was not willing to share her space. We placed him back in his bachelor pad.”

The eggs were then placed in an incubator that maintained temperatures similar to the nest the female had dug, and on June 30, two glass lizards came out of their shells. The lizards weigh 9 grams and are feeding on snails, slugs, crickets and worms, the same diet as the parents.

The European glass lizard is a large glass lizard that can be found in Europe into western Asia. There are two subspecies, which can be identified by the shape of their head. The eastern subspecies, P. a. apodus, has a narrower head than the western, P. a. thracius. The western species lives in a dry climate while the eastern species lives in a moist climate. They can reach lengths of nearly 4.5 feet. They are known to live more than 50 years in captivity.