Did you know that Indiana Jones was afraid of legless lizards?

While pondering a possible topic for this week’s blog, I originally settled on caecilians, wormlike amphibians that are occasionally encountered in stores. The “rubber eels,” a somewhat common sight in tropical fish stores years ago, were actually caecilians, most often the species Typhlonectes natans and T. compressicauda, which are now illegal to import. But then, as I was hunkering down at my keyboard and cracking my outstretched knuckles, much like a concert pianist about to regale his audience with a stirring recital, my brain took a left turn and, still clinging stubbornly to the notion of writing about appendage-challenged herps, I decided to write about a legless lizard known as the scheltopusik instead. After all, these guys are occasionally encountered at reptile stores and expos, and therefore perhaps more of you have wondered about them. So this week we’ll focus on this legless lizard, and maybe I’ll return to the caecilians in a future blog. So (sound of knuckles cracking), let’s talk scheltopusik! 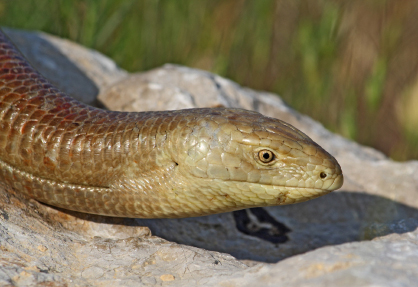 The word “scheltopusik” is Slavic, from the Russian word for “yellow belly."

Truth be told, the scheltopusik (Pseudopus apodus) is not completely legless. It has tiny, rudimentary rear limbs, measuring about 2 millimeters, which can sometimes be seen near the cloaca. There are several lizard families and genera that include species with diminished or nonexistent limbs, including blind, burrowing species, but I’m going to focus upon the scheltopusik because I think this is the species you’re most likely to see for sale, though no legless lizard species, including P. apodus, is exceedingly common. Captive-bred specimens may occasionally surface – legendary herpetoculturalist Bert Langerwerf bred the scheltopusik – but you’re most likely to come across wild-caught specimens for sale. Should you decide to purchase a wild-caught scheltopusik, the usual advice regarding wild-caught reptiles would apply: Have a reptile-savvy veterinarian check it over, to attend to any internal bugaboos that it may be secretly harboring. As is the case with most captive-bred versus wild-caught animals, the price can be a signal as to the origination of the animals you’re examining. Wild-caught scheltopusik are not very expensive.

The word “scheltopusik” is Slavic, from the Russian word for “yellow belly.” It is the largest legless lizard and can reach a length of about 4 feet. It is also called the European or giant glass lizard, the “glass” moniker because the group of legless lizards known as glass lizards (including Ophisaurus species, which once included the scheltopusik until it was reclassified) were once believed to shatter like glass upon being handled! This myth surely resulted due to the lizards’ proclivity for caudal autotomy. While it is true that some legless lizards may readily drop their tails if molested, the scheltopusik is not known for doing so. I’ve handled specimens, and they were quite sturdy and rugged. Bert Langerwerf wrote that a scheltopusik could be picked up by its tail without breaking it, not that I would recommend you test this for yourself. Of course, upon first viewing it can be a bit difficult to tell where the body ends and the tail begins. Examining the location of the lizard’s vent will help with that, and you’ll likely find that the tail comprises about 50 percent or more of the lizard’s total length.

Although it resembles a snake – specimens were even used as doubles for asps in the snake pit scene in Raiders of the Lost Ark – P. apodus is very much a lizard. Its scales are rough, and it has eyelids and ear holes. A long groove runs alongside both sides of the body. In Turkey, the lizard’s common name is oluku kertenkele, which means “grooved lizard” – bet you didn’t know when you began reading this blog that you would be getting so many language lessons! It has teeth like a lizard, not fangs like a snake, and though it is an opportunistic feeder that will eat many prey items, including eggs, lizards, small birds and mammals, its primary wild diet consists of arthropods, including snails and slugs. A video at the end of this blog shows two scheltopusiks happily devouring a plate of snails.

Pseudopus apodus has a wide range throughout eastern Europe and Asia. Because of this, wild specimens inhabit a variety of habitat types: dryer in the western areas and more moist in the eastern areas. There are two subspecies, which may be differentiated by the shape of the head. The eastern subspecies, P. a. apodus, has a narrower head than the western, P. a. thracius. You should try to identify what type your prospective pet may be, so you can set up an appropriate enclosure that mimics its natural habitat: dryer for the western, a bit moist for the eastern.

A scheltopusik terrarium should be horizontally oriented rather than vertical, though some low climbing branches should be provided, as the lizards will utilize them. Be sure branches are secure, and that the weight of the lizard(s) will not cause them to topple. The same goes for any rocks you may place into the enclosure. Epoxy or a similar adhesive can be used to secure cage furnishings, if necessary. Two scheltopusiks can be comfortably housed in an enclosure with a ground area measuring 4 feet by 4 feet. One measuring 4 feet by 2 feet would be OK for a single specimen. They are diurnal, so will require UVB lighting. The enclosure’s height should allow the lights to be placed a proper distance from the bottom of the enclosure to allow maximum benefit. If the lights are too high, the beneficial properties of the lights will be reduced. An enclosure measuring 24 inches tall will work, as this height will allow proper light placement over a screen top (glass will filter out the UV) as well as several inches of a burrowable substrate, such as cypress mulch or potting soil mixed with sand. In addition to providing a substrate that will allow burrowing, provide other hiding places, whether via a hidebox or hollow logs, etc. Like all reptiles, the scheltopusik needs a place to hide in order to feel secure, and security results in a healthier animal. Place a basking lamp at one end of the enclosure, maintaining a hot spot in the high-80s Fahrenheit.

Though snails and slugs figure largely in the wild scheltopusik diet, and you should offer these if you can, captive specimens will also accept pinky mice, crickets, superworms and other prey tems. Dust them with a calcium supplement, and offer them on a dish or in a bowl to decrease the chance that your scheltopusik will ingest substrate while feeding. Scheltopusik can be fairly vigorous feeders. Their bite is said to be a painful one, though I can’t verify this, never having had the pleasure of being chomped by a scheltopusik. A water bowl should be provided, and be sure to keep it clean.

I found the intense eyes of the scheltopusiks I handled particularly impressive; they gave the lizards a distinct air of intelligence. They don’t relish handling – don’t get one figuring on cuddling with it very often – but don’t let this put you off from owning one. The scheltopusik is a very interesting lizard, and if you do the proper legwork, your pet may live for 20 years or longer. If you want to add a new wrinkle to your reptile collection, the unique scheltopusik is a species that is well worth considering.