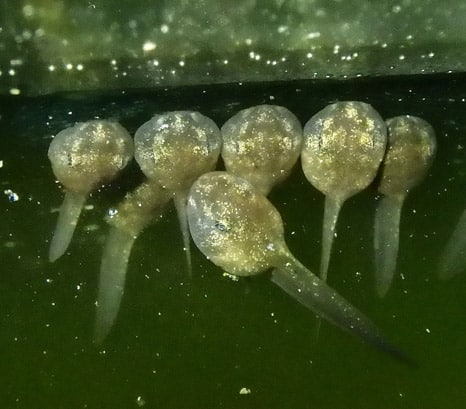 The Northern Leopard Frog: From Egg To Frog

A journey of the leopard frog from tadpole to adult.

What began as tragedy becomes something of great beauty, as my dear friend, Elaine, experienced the loss of a friend, who died in a roofing accident this past March. While in mourning she was walking among the bare, muddy fields near her home when she came upon a ditch that separated two fields. In the water of the ditch, she saw a mysterious dark object which turned out to be a mass of frog eggs. 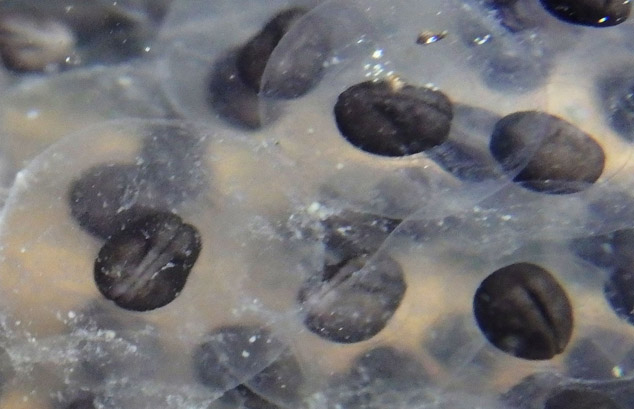 Division occurring in the egg.

She remembered I was looking for eggs of the Northern Leopard frog (Rana, or Lithobates pipiens), having remembered I once shared with her how I ordered some through the mail from a biological supply company and had great success with them. 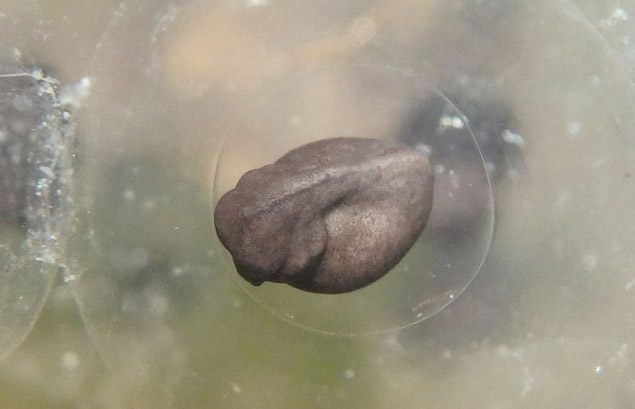 She texted me and sent a picture of the eggs. I called her and asked more information about the habitat, since the eggs of the Wood frog (R. sylvatica) look very much like them. She described the habitat to be a small, slow-flowing shallow ditch, running between the two fields, with no close trees in sight, and with little clusters of dead cattails (Typha latifolia) standing amongst the stalks of dead grasses in the water itself, so we assumed these should be Leopard frogs. In the background we both heard calling Western Chorus frogs (Pseudacris triserata), which often breeds with Leopards, so we carefully decided to do the next step.

By now the sun was quickly setting, so she hurried back to the house and grabbed a small plastic jar with a lid, returned to the spot and just as darkness fell, she stepped into the cold water and pinched off part of the egg mass. I felt best with a small number, knowing they would do much better if less crowded, especially once they reached a larger size. I had the space for less than a hundred or so.

She added a small amount of water into the jar, along with the eggs, with most of the container filled with air, and mailed the package. Two days later the eggs arrived in Florida, where I immediately opened the box, and I was very happy to see the eggs all looking very much alive! I had a 10 gallon tank set up, containing about four inches of water. I added some dead grass and a couple small live water plants collected locally, to keep the eggs near the surface. I then carefully added the eggs. 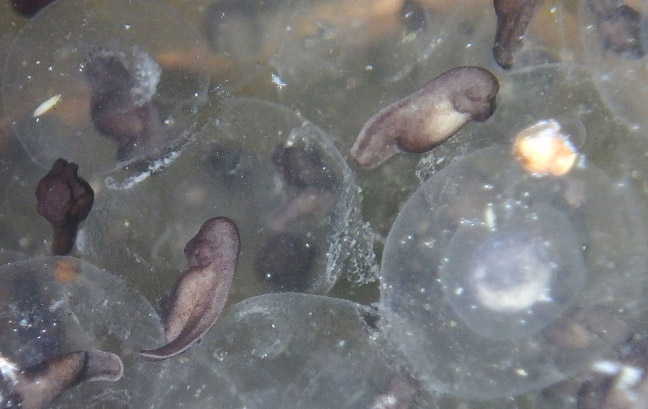 The embryos were still perfectly round, and after a couple moments they all "polarized" themselves to face the sun after being placed in the aquarium.  I called Elaine to congratulate her! A job well done, and all in perfect timing!

Three days later I had hatchlings! For several days the tiny tads clung onto their egg mass, looking more like little flat wafers than tadpoles, and in less than a week they started swimming freely, and growing daily. It was time to feed them.

For the first few days they clung almost helplessly to the empty egg mass. Any left inside at this time were dead, which are often whitish in color. It's at this stage where such creatures as newts, baby turtles, and dragonfly nymphs may take their toll among the wild populations. In captivity however, I still kept them covered with a screen lid, knowing how diving beetles or other aquatic insects could fly in and eat them. 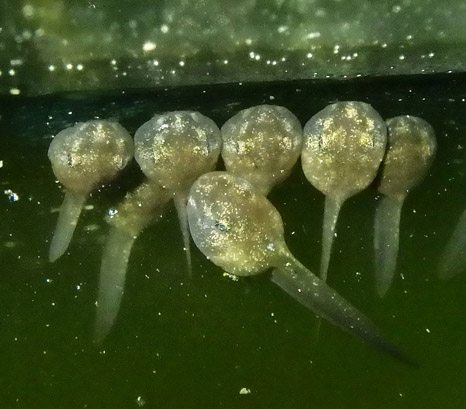 Day 7. The tadpoles are beginning to look like tadpoles.

Once they reached about one inch in length I removed them from the aquarium and placed them into children's wading pools. These were about six feet across, and about a foot high. I placed about 25 tadpoles in each of these pools, along with a small variety of live water plants, and they were fed color-enhancing fish food flakes, which were stirred into the water so they'd sink to the bottom. It was interesting to watch the tadpoles scour the bottom and devour the flakes. Unlike fish, these never went directly toward the submerged flakes to take them on sight, but more or less randomly worked the bottom, and fed on the flakes whenever they came upon them. Also for reasons unknown, every now and then a tadpole would die, and the others would quickly consume it, which led me to offer them tiny bits of raw hamburger, to which was added a pinch of oyster shell calcium powder, and within moments, a half dozen or so would be swarming around the meat, devouring it fairly quickly. The mouth of the leopard frog tadpole.

A couple weeks later I began to see back legs appear. I placed a couple into an aquarium, and it wasn't long before one of them clung to the side, revealing its underside, where I got some detailed pictures showing the mouthparts, and after Googling tadpole mouthparts it pretty much confirmed these were the beautiful northern leopards I was long hoping for! The only other species I was concerned these may become would be the wood frog, but the mouthparts pretty much confirmed these were indeed leopards. First spots of the leopard frog.

I was soon beginning to see the front legs come through, and at the same time I was never so happy to see spots! leopards! Over the next two weeks they all absorbed their tails, and I ended up with some beautiful little leopard frogs, and they were soon feeding on small insects that were attracted to their new setup, which were drawn in with a blacklight. The ultraviolet quality of the blacklight drew in many insects, and they quickly learned which ones were edible, and which ones were not. They would avoid most beetles, as well as night-flying wasps, but greedily consumed small moths, mayflies, and other insects that neither stung, nor produced a potent smell. Soon I was feeding them small earthworms, and they grew quickly. 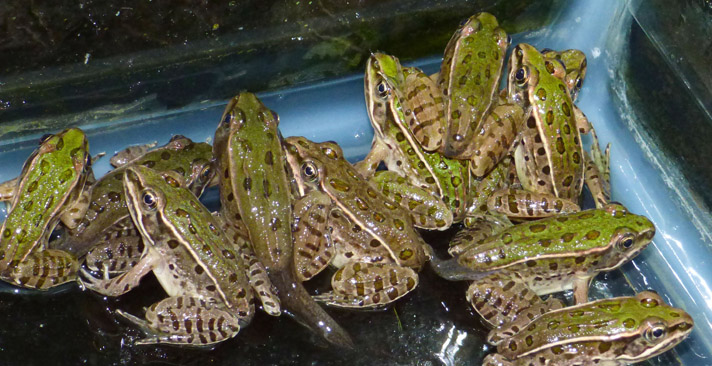 Leopard frogs maturing. Some still have remnants of their tails.

Once their front legs came through, I immediately removed them from their plastic "kiddie pools" and placed them into a 55-gallon aquarium, since they would soon be able to climb the sides of the pool. Also when they were in the kiddie pools I would change their water at least once a week, because if forced to eat their own droppings, I learned from personal experience they mature earlier, and at a much smaller size, which would produce frogs with much fewer spots. Currently they're are about half-grown, as of mid August, and are more beautiful than ever, and they look just as nice as their wild counterparts, and today Elaine and I celebrate this grand success, and speak of it often, how something that seemed so impossible in the beginning, became a real labor of love. We ended up with a fine little collection of beautiful babies, and these will live out their lives in a large outdoor screen cage we nicknamed the Froggatorium.  Hopefully in the near future I'll be able to share the Froggatorium with you here, and all that goes on in there!

"Nature" Joe (Myers) has been keeping and breeding leopard frogs for many years, and working with groups of people of all ages in an outdoor educational setting since 1986, and can be followed on Facebook https://www.facebook.com/n.joe.myers where his nature photography can be seen publicly.