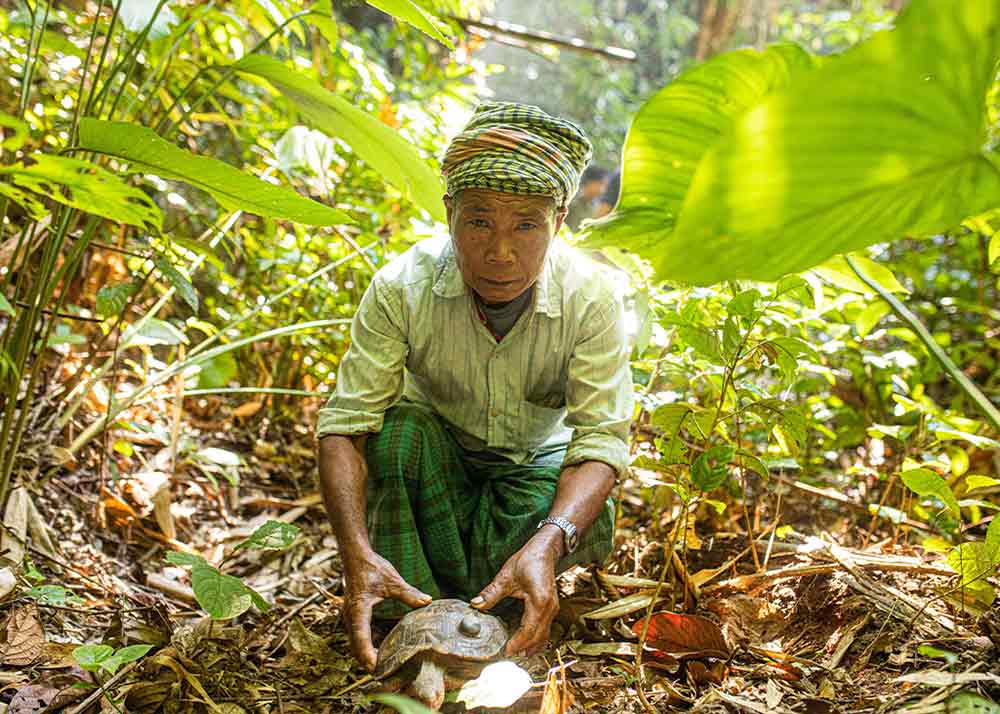 The release of these 10 critically endangered reptiles marks the first time in which the species has been rewilded.

The threats to Manouria emys phayrei include commercial and subsistence hunting as well as forest habitat destruction.

Ten captive-bred Asian giant tortoises (Manouria emys phayrei) have been released into the wild in Bangaldesh with the assistance of the Turtle Survival Alliance (TSA), Bangladesh Forest Department (BFD), and Creative Conservation Alliance (CCA). The release of these 10 critically endangered reptiles marks the first time in which the species has been rewilded. The chelonians were released into the Chattogram Hill Tracts of southeastern Bangladesh, according to a press release put out by the Turtle Survival Alliance. The 200 hectare forest in which the tortoises were released is managed by the local community. 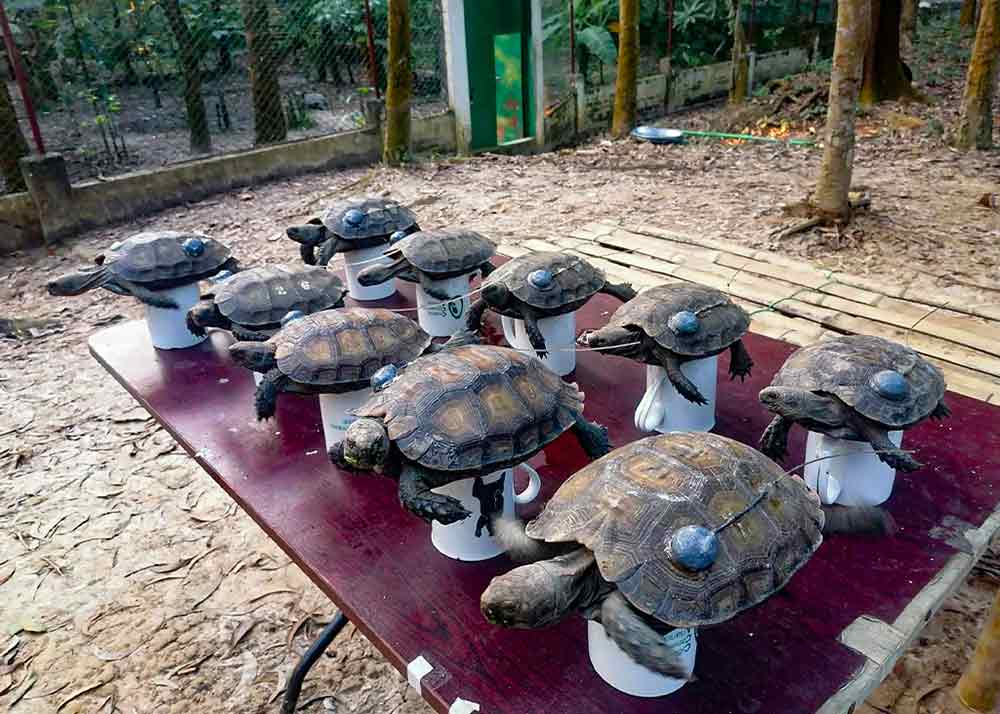 “This is a really BIG first step toward realizing TSA’s goal of returning Asian Giant Tortoises to the landscape, Rick Hudson, President of Turtle Survival Alliance said in a statement released to the media. “With conservation breeding programs in India, Myanmar and Bangladesh, this effort is the embodiment of TSA’s strategy of building assurance colonies from doomed animals seized from the wildlife trade with the goal of restoring wild populations.”

The movements of the tortoises will be monitored by reformed hunters from the local communities and are trained as parabiologists, or field technicians. The release of these tortoises will also serve as a model for the future release of other turtle and tortoise species in community managed forests in Bangladesh. The tortoises are two-and-a-half years old, having hatched in 2019 at the FD/TSA/CCA’s Tortoise Conservation Center in Bhawal National Park. The released tortoises are 10 of 46 tortoises that hatched that year. They are the offspring of parents that were seized or surrendered by poachers who hunt them for food. 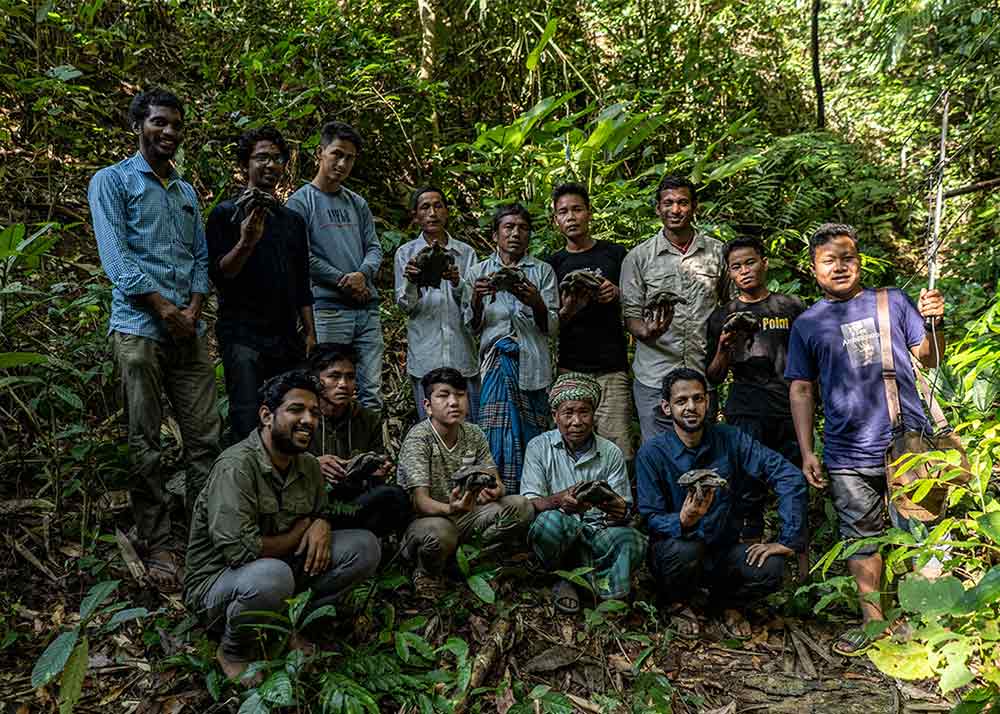 “This release epitomizes why we created the Turtle Conservation Center and why we work diligently to create meaningful and lasting relationships with indigenous communities of the Chattogram Hill Tracts,” Shahriar ‘Caesar’ Rahman of Creative Conservation Alliance and Turtle Survival Alliance said in the statement. “It exemplifies the value of public-private collaborations, and illustrates the use of conservation breeding as a tool to restore populations of native animals in the wild.” 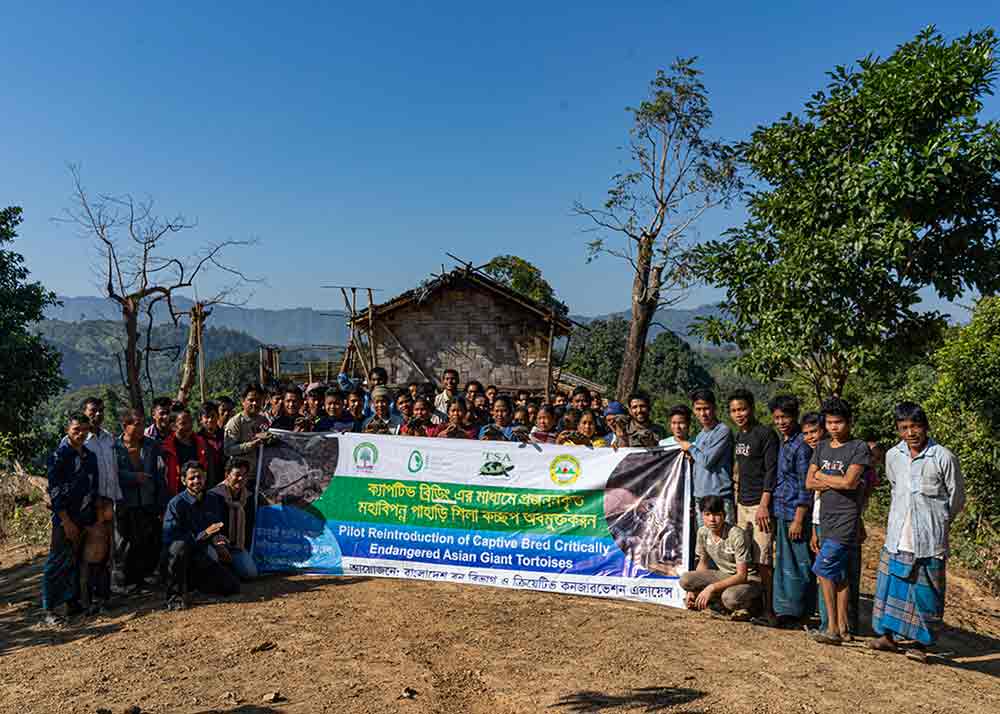 The release of the ten captive-bred Asian Giant Tortoises was a historic moment for the Chattogram Hill Tracts, the recipient community, the collaborative conservation organizations, and Bangladesh. Photo: Kowshikur Rahman/CCA

Manouria emys phayrei is the largest tortoise in Asia. It can reach up to 24 inches (61 cm) in length and weigh up to 77 lbs. (35kg). It can be found in much of Southeast Asian, including Bangladesh, Brunei, India, Indonesia, Malaysia, Myanmar, and Thailand. It is extirpated from Singapore. Its main threats include commercial and subsistence hunting as well as forest habitat destruction. It is listed as Critically Endangered by the International Union for Conservation of Nature (IUCN).