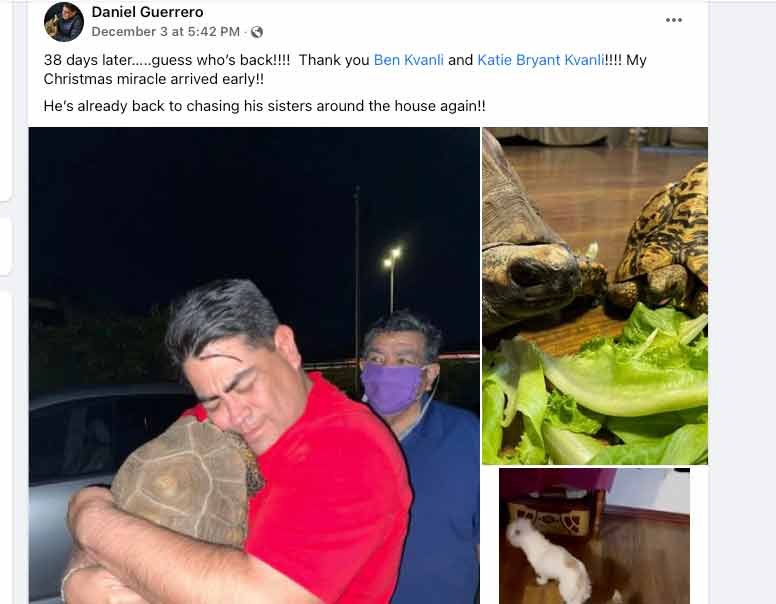 Diego went missing 38 days and was found by a former Olympian down by a river. Screengrab via Daniel Guerrero Facebook page.

Diego, a yellow-footed tortoise that was rescued by Daniel Guerrero,the former mayor of San Marcos’ TX two years ago, somehow went missing October 26. Guerrero, who rescued Diego from the Central Texas Tortoise Rescue offered a $1,000 reward for the return of his tortoise, posted flyers and left lost pet ads on social media, to no avail.

Guerrero, thinking Diego was gone for good, then adopted a 12-year-old leopard tortoise, named Chiquito. However, 38 days after Diego went missing, he was found alongside a river by former Olympic kayaker Ben Kvanli.

“Ben has been watching the river while paddling his kayak for decades and Friday evening he spotted a familiar face and shell that was just out of place and searching for his home,” Guerrero wrote in a Facebook post. “According to Ben, Diego literally walked on to his riverside property. A group of stray cats found Diego at first and drew his attention to a wandering tortoise.”

Kvanli refused the reward, and in the spirit of the holiday season, Guerrero is asking his followers to donate to Ben Kvanli’s Red River Racing Team.

“In the spirit of giving this Holiday Season please consider a donation to Ben Kvanli’s Red River Racing Team,” Guerrero wrote on Facebook. “I’ve witnessed the good work that Ben does in supporting military veterans as they return home and are in search of ways to reconnect with their families and communities. Ben does an amazing job of introducing these heroes to the San Marcos River and encouraging them to reconnect with their inner selves through the healing powers of our river. Please consider making a tax-deductable contribution to this worthy cause as we approach the end of the calendar year.”