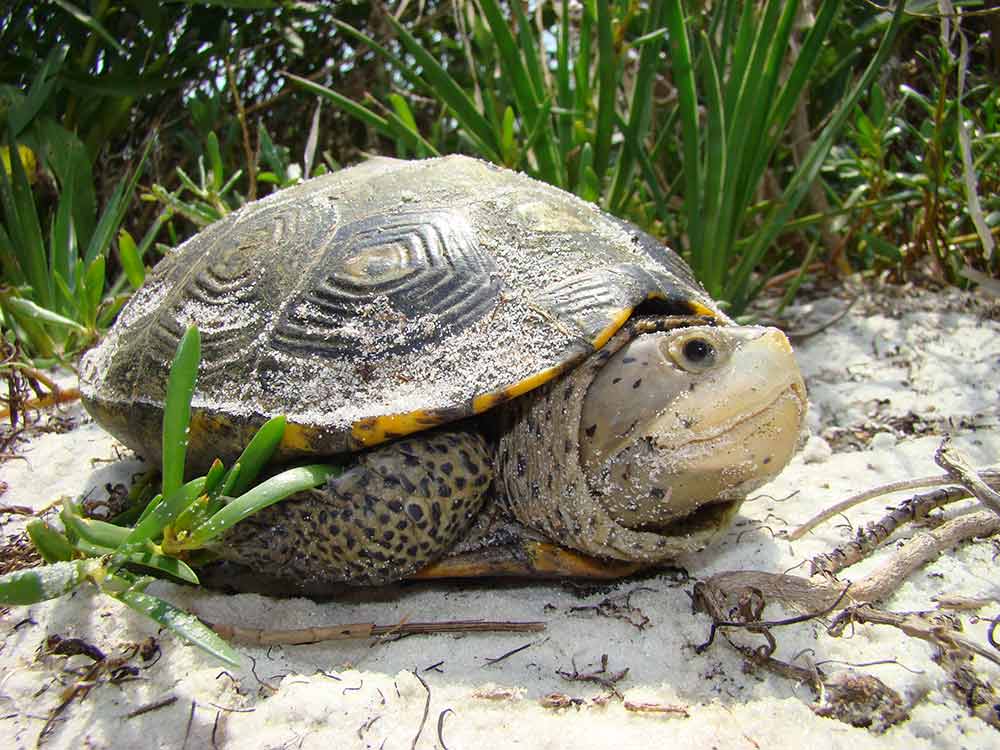 Diamondback terrapins are one of the most beautiful chelonians in America. Photo courtesy George L. Heinrich/Center for Biological Diversity.

The medium-sized turtles are found in coastal brackish and saltwater marshes in the southeastern and eastern United States.

The Florida Fish and Wildlife Conservation Commission has approved a rule that will give the diamondback terrapin (Malaclemys terrapin) some protections in the state. The rule prohibits collecting of the reptiles from the wild and possessing them without a permit, according to a statement released by the Center for Biological Diversity, which petitioned the state for more protections for the species. The diamondback terrapin is listed as vulnerable by the IUCN

The rule also requires recreational blue crab traps to have a turtle excluder device, or the traps must have rigid entrances that measure no more than 2 x 6 inches. These additions will help prevent turtles from entering the traps, or if they do, provide a means to get out of the trap before drowning. The addition of these crab trap elements have not yet been required in commercial blue crab traps until the Florida FWC conducts its own study.

“We’re so glad Florida is working to protect our terrapins, but that work isn’t done till the state addresses threats from the commercial blue crab fishery too,” Elise Bennett, an attorney at the Center for Biological Diversity said in a statement released by the Center.

“We expect the Fish and Wildlife Commission to promptly revisit the issue once it completes its own study. “In the meantime, this rule will give these beautiful turtles some protection from the more limited recreational fishery.”

The diamondback terrapin is a beautiful turtle known for the diamond-like patterns on its carapace. The medium-sized turtles are found in coastal brackish and saltwater marshes in the southeastern and eastern United States, from Texas to most of the West and East coast of Florida, all the way up to Massachusetts.

Seven subspecies exist, including five which live in Florida, three of which are native to the Sunshine State. Males grow to about five inches in carapace length while females can reach nine inches in carapace length. In Massachusetts, the diamondback terrapin is listed as threatened. They are listed as vulnerable on the International Union for Conservation of Nature (IUCN) Red List.