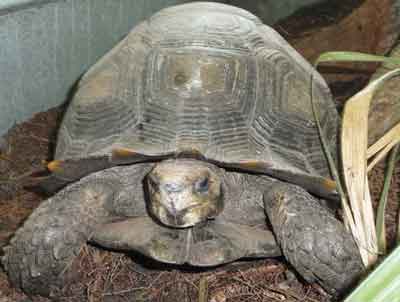 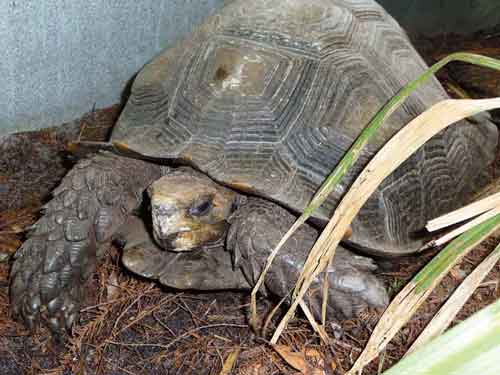 Considered the forth largest tortoise in the world, adults in wild populations average about 70 pounds, but captive tortoises can reach 100 pounds in total mass with a total straight-line length of up to 2 feet.

Burmese mountain tortoises are found in Myanmar (formerly Burma, hence the common name), as well as Malaysia, Thailand and Sumatra. These subspecies are the fourth largest tortoises in the world. Hatchlings are no larger than a baseball in diameter and are much less dome-shaped than typical hatchling tortoises. Adults in wild populations average about 70 pounds, but captive tortoises can reach 100 pounds in total mass with a total straight-line carapace length of up to 2 feet. 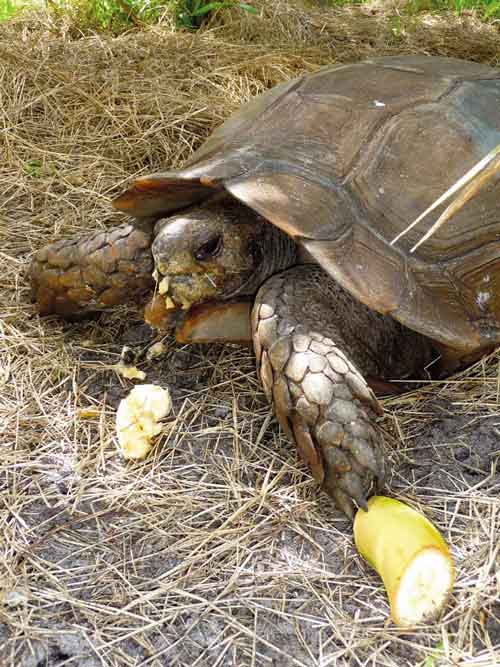 These tortoises are CITES II-protected animals, and any pressure put on wild populations will have a negative impact. This should not be our goal as reptile keepers. Captive-born Burmese mountain tortoises are commonly available.

Their general appearance is similar to the sulcata and gopher tortoises, but with a much darker overall pattern comprised of tan, brown and black coloration. The common name of “six-legged tortoise” refers to several protuberant scales that may develop on the hind legs of adults, giving the appearance of a more complex limb system than is actually present.

The southernmost subspecies within their geographic distribution is M. e. emys. It is the smaller of the two subspecies, as well, and generally lighter in color (hence the common name of “Burmese brown”). Larger and darker (hence “Burmese black”), M. e. phayrei occupies the northernmost portion of the range.

There are generally two ways to tell the two subspecies apart. The first, which works when examining adults, is plastron coloration: M. e. emys has a plastron with yellow coloration compared to the darker coloration of M. e. phayrei. The second, and most accurate way to tell them apart is the scute pattern: M. e. emys has separated pectoral scutes, while those of M. e. phayrei join together at the medial section of the plastron. The scute pattern can be used to identify the subspecies accurately at any age. 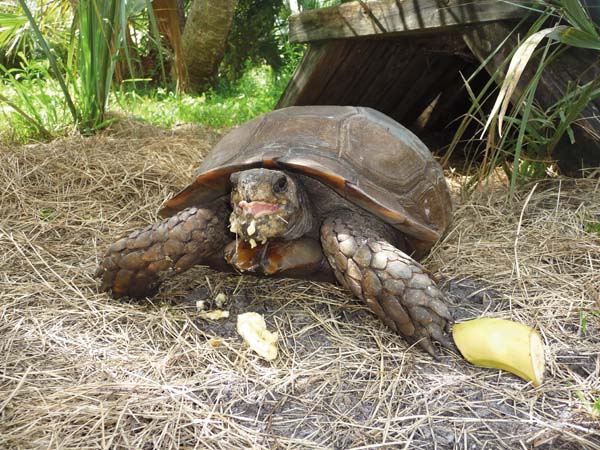 Pectoral scute patterns distinguish the two subspecies. Those of M. e. phayrei join in the middle of the plastron (right); those of M. e. emys (left) do not.

In the last decade, Burmese mountain tortoises have increased in popularity within the tortoise hobby. Wild-caught imports are available; however, although they may be less expensive, for multiple reasons, these should be avoided. These tortoises are CITES II-protected animals, and any pressure put on wild populations will have a negative impact. This should not be our goal as reptile keepers. Captive-born Burmese mountain tortoises are commonly available, and they make better pets because they are already accustomed to life in captivity. There is also less risk of obtaining a tortoise that may have internal parasites or other health problems.

Burmese mountain tortoises are easy to take care of as long as their required environmental conditions are met. Hatchlings and juveniles can be kept indoors, and this is often preferred so keepers have more control over the environment. They can be kept in 20- to 40-gallon aquariums indoors, but as they grow they will eventually need to be moved to a large pen, preferably outdoors. A pen for a subadult that measures up to 12 inches long should be at least 4 feet by 6 feet, but a much larger one of 12 feet by 12 feet will be needed to appropriately house two adults. A much larger pen (20 by 20 plus feet) is needed for a group. 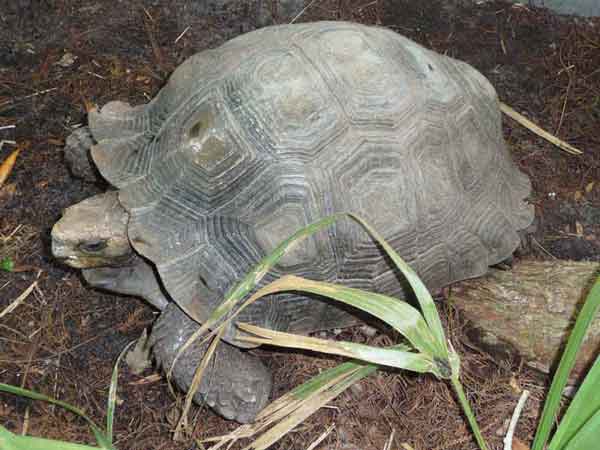 Burmese mountain tortoises are found in Myanmar (formerly Burma, hence the common name), as well as Malaysia, Thailand and Sumatra.

Fir, sphagnum and peat moss all work well for a substrate in an indoor enclosure. Several types of mulch and beaked moss will also work well because of their ability to retain moisture. Many mosses are digestible so there are no worries if your tortoise snacks on it. An ultraviolet light with a UVB percentage of 5 is recommended for an indoor enclosure. A basking light should be placed at one end to provide a hot spot of around 85 degrees Fahrenheit; keep the cool end to around 70 degrees so your tortoise has the option to heat up and cool down. Lights should be limited to approximately 10-hour intervals, or whatever most closely approximates the natural light cycle of your region. If necessary, use heat pads to provide heat when lights are not in use.

The indoor Burmese mountain tortoise environment should have around 80-percent humidity. Regular misting of the enclosure is usually sufficient to achieve this, but some larger cages may require an automated sprayer or misting system. If necessary, a small and very shallow water dish can be provided, which will keep the tortoise hydrated as well as increase the ambient humidity. 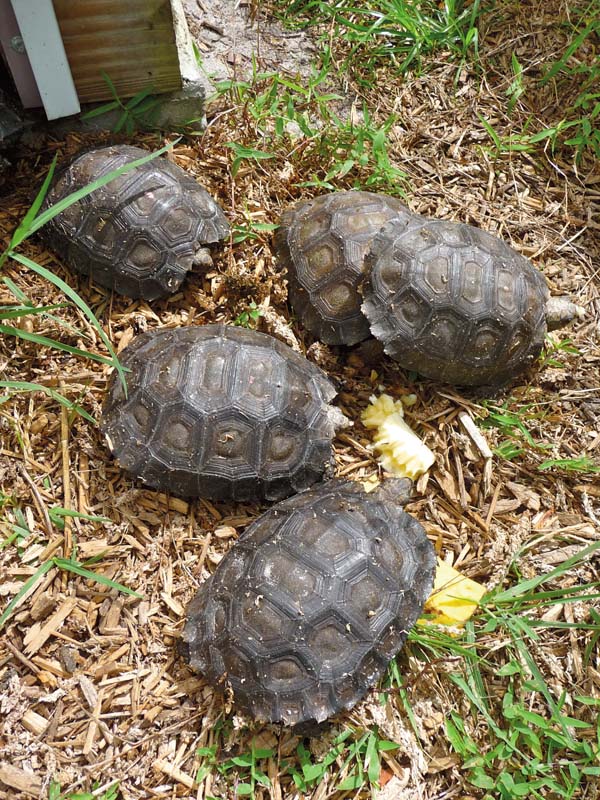 Although hatchlings are shy, adults that are accustomed to their environment become inquisitive and fearless, investigating everything — including treats placed in their pen — in a slow and methodical way.

Burmese mountain tortoises are crepuscular, meaning they are most active at dawn and dusk. Hatchling tortoises can be very shy. They will usually come out to forage but are otherwise hidden during most of the day. As they age, they often become more comfortable and begin to explore. Adults that are accustomed to their environment become inquisitive and fearless, investigating everything in a slow and methodical way.

Female Burmese mountain tortoises guard their nests after the breeding season, which is very rare in tortoises. I have seen photos of females attempting to bite the faces of large monitor lizards and mammals to prevent them from getting to their hatchlings.

Thousands of years ago the Burmese mountain tortoise’s range included China. For various reasons, mostly human related, specimens are no longer found there. These tortoises face several threats outside of the illegal pet trade, including being captured and used as a food source. Some locals within its range believe the tortoise’s meat to possess medicinal applications. The tortoise’s shell, too, is a popular tool in some cultures, and adult Burmese mountain tortoise shells have been used as baby cradles and even small animal enclosures.

Ambient outdoor temperatures from the 50s to the 80s are acceptable for Burmese mountain tortoises. Artificial heat and shade sources should be utilized to maintain appropriate temperatures in at least a portion of the enclosure, no matter what the outdoor temperature and light fluctuations may be. Some keepers achieve this by installing a temperature-controlled shed or tortoise house, complete with an appropriate entrance (in some instances, a doggie door works well), into which the tortoise may seek refuge when outside environmental conditions become unsuitable.

Plan for the Long Term

Given that Burmese mountain tortoises are still relatively new to the hobby, their maximum age in captivity is not yet known. They are larger tortoises, so it is likely that pets could live longer than 60 years. It is safe to assume that a Burmese mountain tortoise will be a life-long pet. You may need to ensure its continued care in your will, as it may outlive you. The most responsible thing you can do is to be sure that your pet will receive proper care with, and perhaps later without, you.

Burmese mountain tortoises are generalist scavengers and browsers, so a fresh meal should be provided at least three times a week, and more often if needed. The primary diet should consist of leafy greens, including mustard, turnip and collard greens, as well as kale, leaf lettuce, dandelions, etc. Some fruit, and even carrion, can be offered, but avoid citrus. Most berries and melons are acceptable. In the wild these tortoises will eat whatever they can find, including various plants, insects and animal carcasses. A varied diet is the healthiest feeding method.

Burmese mountain tortoises are generalist scavengers and browsers, so a fresh meal should be provided at least three times a week, and more if needed.

Mealworms, earthworms and crickets can be offered as supplemental protein, and a high-quality canned dog food can be used as well, but in moderation. Burmese mountain tortoises are very fast growers, and a calcium and vitamin supplement should be provided, as well.

As long as they are kept under ideal conditions and fed a balanced diet, captive-bred Burmese mountain tortoises aren’t prone to any specific health problems. Recently imported individuals are another story entirely, because they often arrive in the U.S. containing parasites and with probable intestinal problems. The survival rate of such specimens is low. Whether you obtain a captive-bred tortoise or a wild-caught one, before you bring your tortoise home do your research and find a veterinarian who is knowledgeable about tortoise care and treatment.

Burmese mountain tortoises can make a great addition to your family as long as you are fully aware of the responsibilities that accompany a tortoise of this size. If you prepare for a life with a gentle giant like this, then it will greatly benefit you. Their slow, methodical pace in life is something to admire.

David Penning is a Doctoral Fellow at the University of Louisiana at Lafayette. He has had years of experience rearing and raising tortoises of all sizes (including the Burmese mountain tortoises). His current research revolves around snake behavior and energetics. You can follow his interests through his website, sites.google.com/site/thelifeofaherper.