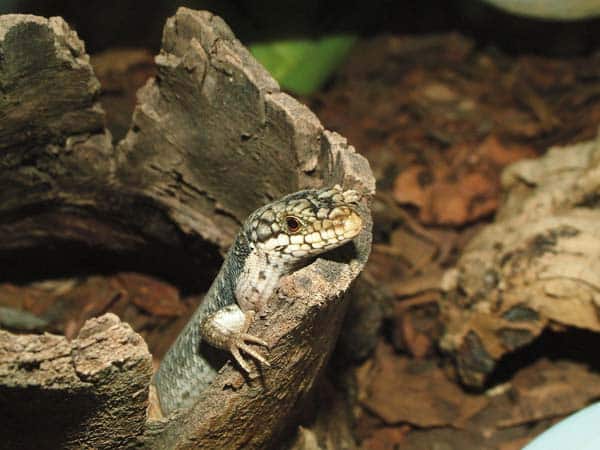 I acquired my first Australian tree skinks (Egernia striolata) at the Tucson Reptile Show several years ago. My wife and I were captivated by a group of six juveniles displayed in a 10-gallon tank, which all the other attendees were ignoring while clamoring for some large northern blue-tongued skinks at the other end of the dealer’s table. Fortunately, Eric Thiss from A Serpent’s Tale was displaying a few books about Australian reptiles, so I quickly double-checked the identification and obtained some cursory information about the tree skink’s natural history, including the facts that it is found in a broad band of woodland habitat around eastern Australia, eats insects and some plant material, and appears to be a communal species in the wild.

Because I am a skink addict, it was easy to convince myself I needed to work with this species. I bought the entire group. 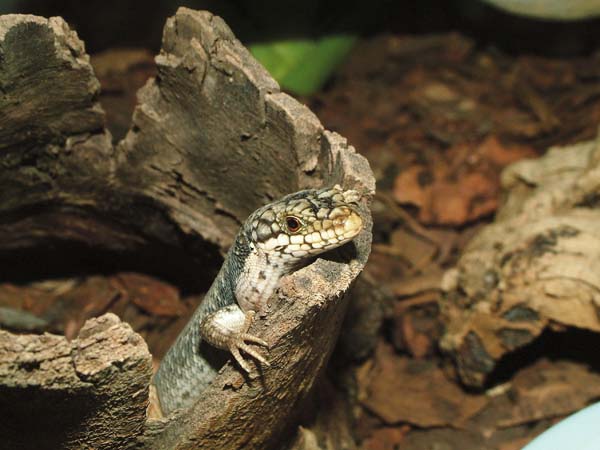 Setting Up the Skinks

My original group of six E. striolata were housed in a Vision cage measuring 28 inches long by 24 inches wide and 24 inches tall, with a 1-inch layer of cypress mulch on the bottom. Two large sheets of sandstone were anchored so that they leaned against the rear wall of the enclosure, with no chance of slipping. An assortment of 1-inch-diameter branches, sheets of flat cork and old cactus “boots” created additional hiding places and climbing spots. A 4-inch water bowl was available at all times.

A 24-inch, 5-percent ultraviolet-B fluorescent bulb (Zoo Med Reptisun UVB 5.0) was on throughout the day. The photoperiod varied throughout the year, approximating the seasonal changes in Arizona (where I live).

Two of the skinks were eventually chased out of the group and had to be moved to a separate setup, but the remaining two breeding pairs have remained in this same enclosure ever since it was first set up. Because they tend to all defecate in the same spot, reportedly similar to their natural behavior in the wild, it is easy to clean the scat piles on a regular basis. This reduces the need for a complete overhaul of the cage.

I currently house skink colonies in several different enclosures, with the original group in the original Vision cage, another group in a 30-gallon aquarium, two groups in separate Vision cages measuring 28 by 14 by 20 inches, and other groups in 20-gallon long aquariums. I’ve learned that you can keep more skinks in a cage by providing them with a lot more climbing space and crevices. One way to provide these is by using a roll of thin pressed cork, such as is used for bulletin boards or sound-proofing. Glue it in strips to the sides and back of an enclosure for more clmbing space. Fold it back and forth several times and secure the edges with cable-ties or glue to create many narrow gaps that the skinks will exploit. However, this cork structure will start to collapse over time. A modified “monitor stack,” such as that used for spiny-tailed monitors, also works well and is more durable. 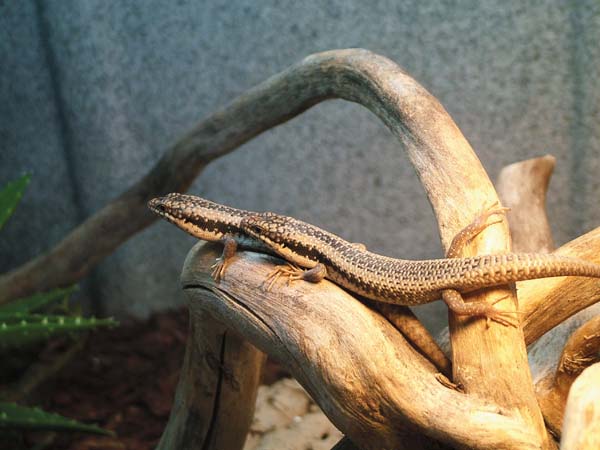 Two juveniles perch on a branch. These lizards are live-bearing and the author has found them easy to breed.

To build a monitor stack, use thin plywood pieces (1⁄8- or 1⁄4-inch thick) separated by 1⁄2- to 3⁄4-inch gaps. I use pieces measuring 4 by 6 inches to 8 by 10 inches for the “floors” of the stack because these fit easily into 20- to 30-gallon aquariums; larger pieces can be used for larger cages. Glue 1-inch-square pieces of 1⁄2- or 3⁄4-inch-thick plywood to each corner and then glue another “floor” piece to the top. The small gaps allow baby skinks to hide out of reach of adult skinks, so it is a good idea to have different width gaps at different levels of the stack. Construct the stack to reach from the floor of the enclosure to within a few inches of the basking light. This allows for a vertical temperature gradient, with the hottest temperature at the top of the stack at about 105 degrees, with temps getting progressively cooler lower down the stack. After you build the stack, let it “age” for a few days in the fresh air and sunshine before placing it in the cage, so that it loses the formaldehyde smell of fresh plywood. I’ve had a group of six adults live (and breed) for a 5 years in a 30-gallon aquarium due to the use of stacked cork on one side and a plywood skink stack on the other.

Although I was initially told that the tree skinks would eat cat food, mine only ate it reluctantly no matter which brand, flavor or texture (chunky, ground or shredded) I offered. They were avid cricket and mealworm eaters, and I offered these insects four times a week, dusting them with calcium three times a week and a multivitamin once a week.

I then discovered that tree skinks like baby food. Peach and sweet potato baby foods were a hit with them, as well as turkey, chicken and lamb baby foods (mine dislike ham and beef). Because the meat baby foods were enthusiastically eaten, I experimented with raising babies on this type of food only, offering vitamin-and-mineral-enriched meat baby food twice a week. About once every six weeks I would substitute peach or sweet potato baby food. As adults, they received about 1 tablespoon per three adult skinks, and I now have some third-generation skinks that have eaten nothing but the enhanced baby food. I currently offer only the twice-a-week baby food diet, no insects. Baby food is much easier than maintaining live insects, and it’s a lot less expensive. If you prefer feeding insects, I suggest giving calcium-dusted insects three times a week and the enriched meat baby food once a week.

I balance the nutrients in the baby food by adding 1⁄8 teaspoon of a high-quality multivitamin containing vitamin A and 1⁄8 teaspoon of a calcium and D3 supplement to each 4-ounce container of baby food. I also add three to five drops of red palm oil (e.g., Avix Sunshine Factor) to each jar of baby food to help keep the beta-carotene level high, which is important for good sheds and good fertility.

It’s fun to watch a group of skinks jockey for position around the plate and then spend minutes lapping the food, pausing often to give every other skink a thorough scrutiny and make sure no one else is getting something better at their end of the plate.

Breeding my viviparous (live-bearing) Australian tree skinks has turned out to be remarkably easy. If you want to try, I recommend raising a group of three or more juveniles together. Given that they are difficult to sex as juveniles, starting out with a group of at least six will give you the high odds of ending up with at least one breeding pair. Quite often you will end up with two breeding pairs and a couple of same-sex skinks that end up either compatible but never part of a pair, or else they are ousted and will need a cage of their own.

Generally, these skinks breed once they reach 2 years of age, although one group produced a baby at a year of age for their new owner. The first litter is small, typically one to three babies, but later litters are typically four to six and sometimes more. The babies are often born over several days and will be found perched on branches in the morning. They are quite skittish, and because well-fed adults usually leave them alone I do not try to catch and remove them individually. I wait until I see several babies and then catch them. I actually use the rolled cork as a trap for babies, making the folds so small that adults can’t fit in. Then, each night, I pick up the roll and just tap babies out of it. It’s much easier than breaking down a cage to get them all. I raise the babies in 5- to 10-gallon aquariums and place weather stripping along the edges of the glass to prevent escapes.

Australian tree skinks tend to be difficult to introduce to each other as adults. Sexing adult skinks is more of an art than a science. Mature males tend to have jowls and a more solid look to the head, and if you look down on a female sitting on a flat rock, she will tend to have a slightly rounded abdomen that gets very prominent when gravid. However, these differences are only obvious if you are looking at a few skinks at the same time.

If you are going to try to introduce adult skinks, make sure you have many more hiding spots, multiple basking lights and multiple food dishes to reduce competition, and keep a careful watch for injuries and weight loss that signal a skink needs to be separated. All the skinks should go into the cage at the same time, and this should be done in the early morning on a day you can observe them closely. Fights may break out immediately, and if there is biting and rolling you’ll need to break up the melee. If there is just chasing and nipping, things might settle down with time.

Fighting among a new group of skinks does not indicate sexes, as both males and females will beat up both males and females. Watch your skinks closely for at least a few months, as it can take time for a low-status skink to deteriorate to the point that it obviously needs to be moved to its own enclosure.

Once a skink has been forced out of the group, it should not be reintroduced to that or any other stable group. Instead, try integrating it into a group made up of other “singletons” or keep it by itself. Don’t despair over singleton skinks. They can be quite delightful pets and will learn to hand-feed if you are patient. Some will even learn to crawl onto your hand, but beware trying to handle them too cavalierly, as they can dash away and disappear. If you grab an escaping skink, you may end up with a wriggling tail in your hand unless you grab them by the neck and body.

To condition your tree skinks for breeding, provide a night-time temperature drop at the end of October so that the overnight temperature in the cage is in the mid to low 60s. Decrease the amount of light, including that used for a basking site, to eight hours per day.

In late January increase all light (UVB and basking) to 10 hours and up to 12 to 14 hours by March. Feed the skinks heavily starting in February, and if all goes well, expect babies to be born in late spring to early summer. Recently, I produced a group of babies with very faded patterns and some with strong orange tails.  My hope is that these traits will be genetically based, but only time will tell.

Australian tree skinks are very hardy, personable skinks. They are active throughout the day, so there is always something to watch. Add to that the ease of breeding tree skinks, and you have a can’t-miss lizard pet!

KEVIN WRIGHT, DVM, co-authored the book Amphibian Medicine and Captive Husbandry, and he has written more than 150 articles.