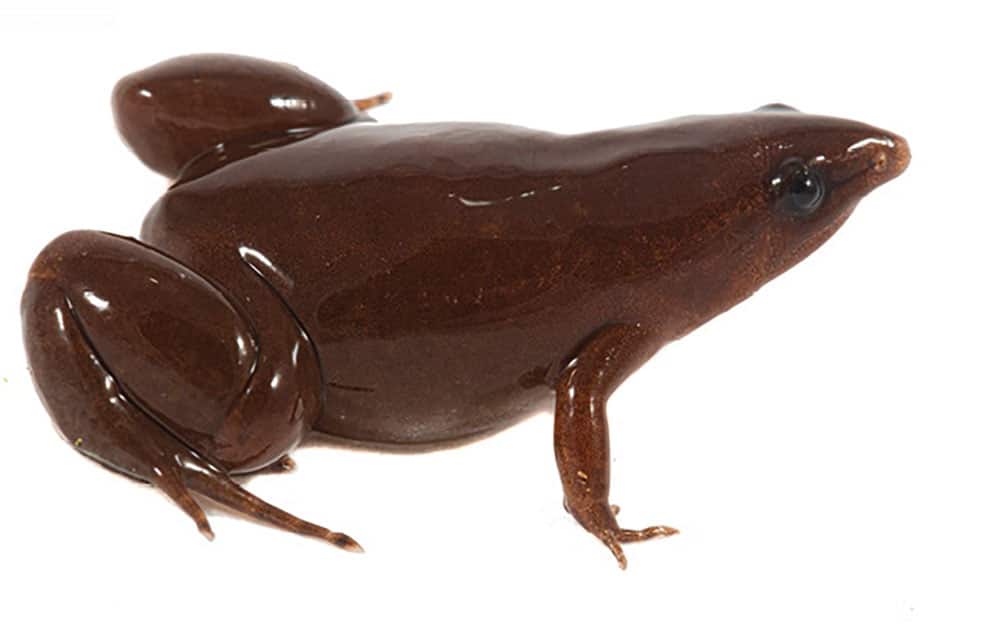 Researchers determined the frog was a new species based on the the frog's call as well as DNA analysis. Photo by Germán Chávez

The tapir frog is so named because it resembles a tapir.

Synapturanus danta sp. nov., or tapir frog, is a burrower and was found underneath roots of the Clusia sp. tree.

Researchers in Peru have discovered and described a new species of microhylid frog that is known to live in the lower Putumayo basin in Loreto, Perú. The frog, of the genus Synapturanus has a snout top vent length of 17.9mm. a stout body and a head that is slightly wider than it is long. It has small eyes and smooth skin and is chocolate brown in coloration, with a cinnamon brown throat and smattering of pale orange and/or yellow dots in some areas of the body.

“These frogs are really hard to find, and that leads to them being understudied,” Michelle Thompson, a co-author of the study describing the frog and researcher with Keller Science Action Center at Chicago’s Field Museum, said in a Pensoft blog announcing the species. “It’s an example of the Amazon’s hidden diversity, and it’s important to document it to understand how important the ecosystem functions.”

New Frog Species Of The Genus Microhyla Discovered In India

The frog, Synapturanus danta sp. nov., or tapir frog, was found to inhabit under the roots of Clusia spa. trees and bushes. Specimens captured for identification purposes were captured at night in Amazon peatland ecosystems. The frog is a burrower, and its body is coducive to burrowing in the peatland ecosystems in which it was discovered. It is about the size of a quarter and are difficult to find.

“Frogs of this genus are spread throughout the Amazon, but since they live underground and can’t get very far by digging, the ranges each species is distributed in are fairly small, Germán Chávez, first author of the study and researcher at Peru’s Instituto Peruano de Herpetología said. “Since we found this new species in Amazon peatland, it wouldn’t be strange for it to be restricted to this environment. Its body shape and general look seems to be adapted to the soft soil of the peatland, rather than the robust and wider shape of species in other environments.”

The researchers determined the frog was a new species based on the the frogs call as well as DNA analysis. The complete paper describing the frog, “A needle in a haystack: Integrative taxonomy reveals the existence of a new small species of fossorial frog (Anura, Microhylidae, Synapturanus) from the vast lower Putumayo basin, Peru” can be read on the Evolutionary Systematics website.