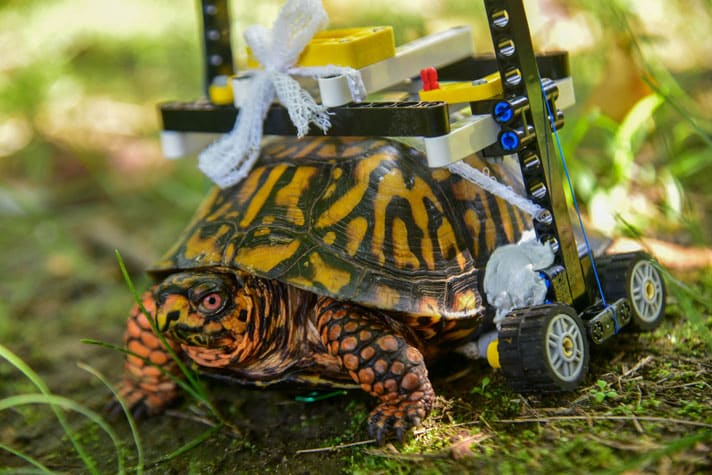 The Legos were fashioned into a wheelchair to help him move about until he is healed enough to be released.

A wild eastern box turtle (Terrapene carolina carolina) with multiple fractures on his plastron is seemingly on the mend thanks to some Lego bricks and a bit of clever engineering. The turtle was brought to The Maryland Zoo by a zoo employee who happened upon the reptile in Druid Hill Park.

A wild box turtle is in recovery thanks to our hospital team's creative thinking. Now fitted with a LEGO® wheelchair, this turtle can comfortably heal and eventually be returned to the wild. Read more: https://bit.ly/2N1XTIk 🐢

Posted by The Maryland Zoo in Baltimore on Wednesday, September 26, 2018

“In July, an injured turtle was found in Druid Hill Park by a Zoo employee, and was brought to the Zoo’s hospital for treatment,” Dr. Ellen Bronson, senior director of animal health, conservation, and research at the Zoo said in a press release put out by the zoo. “He had multiple fractures on his plastron, the bottom part of his shell. Because of the unique placement of the fractures, we faced a difficult challenge with maintaining the turtle’s mobility while allowing him to heal properly.” 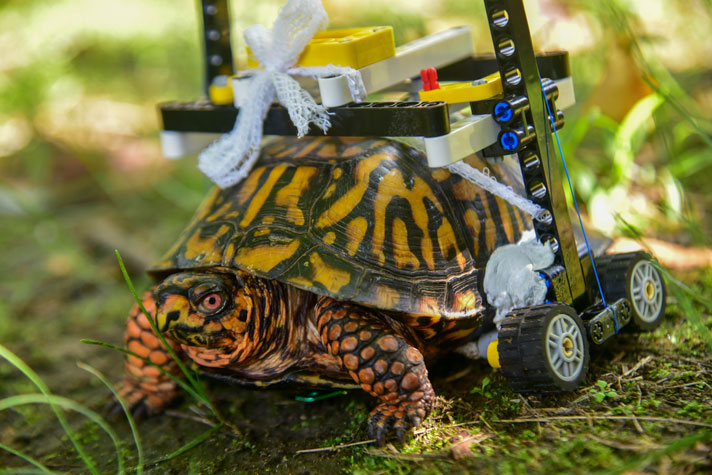 This eastern box turtle was brought to The Maryland Zoo with multiple fractures on his plastron. The Legos were fashioned into a wheelchair to help him move about until he is healed enough to be released.

The veterinarians at the zoo performed surgery to stabilize the turtle's shell so it could heal, and then with the help of fourth year veterinary student Garrett Fraess, sketches of a custom wheelchair for the turtle were drawn. Fraess then forwarded those drawings to a friend who was a Lego enthusiast, who was able to build out a custom wheelchair for the tortoise that enables him to move about without dragging his hind legs, and helps to keep the shell stabilized.

“He never even hesitated,” Fraess said of the turtle. “He took off and has been doing great. Turtles are really good at healing as long as the shell remains stable.”

Eastern box turtles are monitored by the zoo at Druid Hill Park in an effort for the zoo to determine how the species thrives in an urban park setting. The zoo tagged this turtle in 2000, making him around 18 years of age.

“Turtles heal much slower than mammals and birds, since their metabolism is slower So, this turtle will likely use his LEGO® wheelchair through the winter and into the spring until all of the fragments have fused together and the shell has completely healed,” Dr. Bronson said. “We are very happy that he is recovering well from his injuries and we plan to return him to the wild once he is fully healed.”

Loading...
Newer Post
Horned Lizards Released Back Into The Wild In Texas
Older Post
Florida Kingsnake In NorCal With Bad Burns On His Body Ready For Adoption
Advertisement