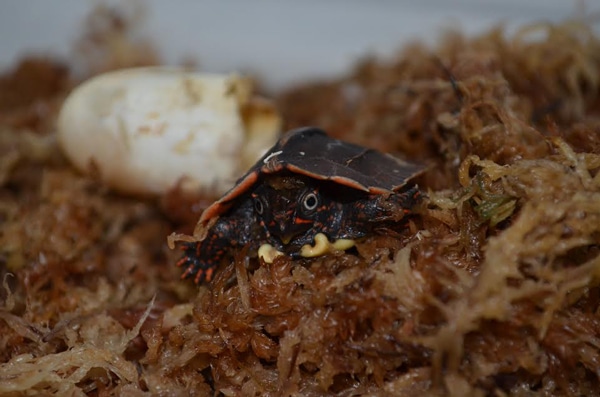 Zoo Knoxville in Knoxville, TN announced that it has successfully hatched a black-breasted leaf turtle (Geoemyda spengleri) , a rare feat considering these turtles have typical clutch sizes of just one or two eggs.

The zoo, which is part of the Association of Zoos & Aquariums captive breeding program for the endangered turtle, first successfully hatched a black-breasted leaf turtle in 2005. It had a single female turtle for many years and added a male in the mid 2000’s, according to Stephen Nelson, the zoo’s herpetologist who oversees the breeding program. That introduction led to the zoo's first successful black-breasted leaf turtle offspring.

"At Zoo Knoxville, we have one male, three females, and the new hatchling (one of the females is a sub-adult and not yet of reproductive size)," Nelson told ReptilesMagazine.com. "In the overall AZA studbook population there are 42 males, 67 females, and 29 unsexed turtle as of early January 2015."

Nelson told ReptilesMagazine.com that the population of the turtle in the wild is unknown, though researchers believe that it is declining due to over collection.

"The greatest threat to this species in the wild is over collection, namely for the food trade in Southeast Asia and the pet trade," Nelson told ReptilesMagazine.com. "The IUCN Red List lists this species as Endangered. If the current collection trend continues then the future for this species may be grim."